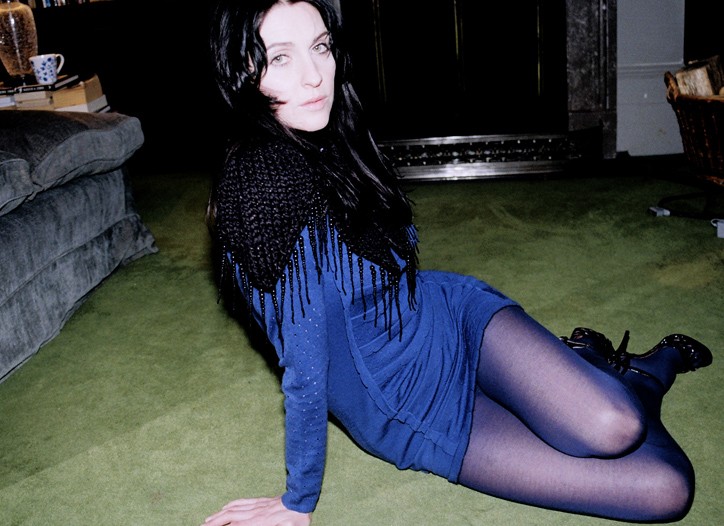 PARIS — When it comes to perking up fashion and accessories businesses, models are increasingly becoming go-to designers.

Headlined by Kate Moss, who now designs collections for Topshop and Longchamp, a flurry of new fashion and accessories projects between brands and models are entering the market, from Cindy Crawford, whose jewelry line for J.C. Penney Co. Inc. will hit 600 Penney’s stores and jcp.com this month, to Eva Herzigova, who on Thursday will unveil at the Hôtel de Crillon here her fashion line for the Etam-owned French fast-fashion chain 1.2.3.

Brands say it’s an image-boosting and lucrative win-win for both parties.

In February, the month that marked the launch of the Kate Moss for Longchamp handbag line, for instance, sales at the French firm’s own stores spiked 25 percent, even though the product entered stores midmonth.

“This is not a one-shot…We want it to generate sales and she does, too,” said Jean Cassegrain, managing director of Longchamp. He added Moss, who has an “open contract” with the house, was present at every stage of development, from brainstorming to the visual merchandising to the tweaking of prototypes. The fall collection, for which David Sims just shot the campaign, will likely be presented in May.

Sebastian Manes, director of accessories at London department store Selfridges, which opened a pop-up Kate Moss for Longchamp store for a week in February, was positive about the collection’s appeal.

“Kate’s designs are understated and chic — add that to the heritage and craftsmanship of Longchamp and the result is a sophisticated, commercial product,” said Manes. “The collection is classic, rather than trend-led, so I expect Kate Moss for Longchamp to continue to sell well and consistently throughout the season.”

Models interviewed by WWD said they see designing as a natural next step forward and prime opportunity to take advantage of what they’re exposed to during their careers.

Compared with a young designer, what they have at their fingertips in terms of contacts, resources, support and exposure is dazzling.

For example, Milan-based Estonian model Inga Savits, who plans to launch a shoe line, said working for the house of Versace and the late Yves Saint Laurent during her modeling career allowed her to observe the development of collections from the atelier to the podium. “[Saint Laurent] would throw a piece of material on me and create a look. It was the best school,” she said, adding she also learned a lot from footwear designer Brian Atwood at Versace.

Herzigova said she sees designing as a tremendous adventure considering where she comes from, the Czech Republic, where she had limited access to fashion. “I have been taught everything,” she said.

But even Herzigova’s vast experience in the modeling trade was not enough to prepare her for the pressure involved with running a fashion line solo. She recently abandoned her signature swimwear collection after the birth of her son, George, in 2007.

“It was pretty unreasonable doing that without a partner or establishment behind me. Everything hung on my decisions, it was a pretty hard experience,” acknowledged Herzigova. By contrast, pairing up with 1.2.3, a chain with “major international experience” and more than 3,000 points of sale, is a breeze, she said.

Herzigova said she had been approached by several brands to design for them, and weighed offers based on the right fit. “It’s a lot about the people, who they are, what they want from you and what I want to get across; this is the best match,” she said. Group Etam already boasts Natalia Vodianova in its ranks; she designs a signature line for the Etam Lingerie brand.

While on flights and between jobs, model Anja Rubik collaborates on a shoe and bag line for Poland’s Quazi, while Lily Cole, having transitioned from modeling into acting, is part of a new British ethical knitwear collection that launched last year, called The North Circular.

Also doing her bit for ethical fashion, Erin O’Connor is said to be acting as ambassador to the All India Federation of Self-Employed Women’s Associations, an organization that is trying to improve the lives of seamstresses in the country. The model is said to have recently presented scarves made by the organization’s workers to certain retailers.

Top models describe developing lines as a way of securing a long-term career. Elle Macpherson, whose signature lingerie brand, Elle Macpherson Intimates, turns 20 this year and is distributed in 1,300 doors worldwide, said she chose to forego “substantial fees” as the face of Victoria’s Secret to launch her brand, a move she described as “a very nonlucrative decision.”

But for her it was worth it. “What I had earned in a day I earned in a year, but I was willing to make a commitment to my future,” said Macpherson, who made a runway comeback in the Louis Vuitton show last month.

With more and more models accruing designer side gigs, meanwhile, could they one day take a runway bow for one of the major fashion houses?

For some, the idea is not so absurd. “I can absolutely imagine the day, but for it to be successful, it would have to be authentic,” said Ed Burstell, buying director for Liberty, which carries the Elle Macpherson Intimates collection as well as scarves from Liya Kebede’s Lemlem line and stylist and former model Irini Arakas’ Prova collection.

Anticipating a new second wave of model-brand hookups, he attributed the phenomenon to a growing awareness from both parties as to the marketability of model-designed lines. “It’s a sign of the times that — whether you agree or not — models are now celebrities,” said Burstell.

One model eager to take on the catwalk from another perspective — as a designer — is Coco Rocha, who confirmed she is in the preliminary stages of building a women’s ready-to-wear line, named Rococo, with fiancé James Conran, who she’s due to marry in June.

Rocha wore a self-designed Rococo gown to the Grammy Awards in February. The Rococo line, she said, will focus on affordable, wearable pieces “with a difference.

“You know me, I’m into vintage pieces, I have pieces from the 1800s or the 1940s and 1950s. I like girls to look elegant; I like rich colors and textures,” said Rocha, who notes demand from her fans is for more affordable, accessible fashions.

Whereas many models sell their name to licensing groups, Rocha is determined to be the real deal. She wants to grow the label into the “biggest and best of what it can be” and said she’ll be 100 percent involved in making the clothes. “I want people to take me seriously.…I want to be able to turn around and say, ‘I made that,’” she said.

Among British models parlaying their status as muses into fashion collections, raven-haired Susie Bick, who modeled for houses including Vivienne Westwood, Dior and Yves Saint Laurent during the Eighties and Nineties, unveiled a capsule collection of knit dresses and sweaters during London Fashion Week in collaboration with her longtime pal, designer Bella Freud. Called Susie Bick and Bella Freud, the collection is based on minidresses, fitted sweaters and knit skirts, all in superfine merino wool, along with cashmere stockings and clutch bags.

Bick, who is married to musician Nick Cave, said she drew on her experience as a model for the collection. “I’ve always had a fascination with being able to transform yourself with the way you dress,” she said. “Part of the pleasure [of modeling] for me was handling these clothes, feeling a new fabric for the first time.”

Freud said Bick’s input into the collection was specific, asking for “cuffs that cling to the wrist,” or “a black dress with long sleeves.”

“When we met in the late Eighties and Susie modeled for me, she was my ideal,” said Freud, recalling how the model once nonchalantly chopped the skirt of an Ossie Clark maxidress to make it a mini. “I love the way she dresses.”

The collection, which wholesales from 70 pounds, or $108, for a miniskirt, will launch at Matches in the U.K. and Net-a-Porter beginning in August.

Fledgling label The North Circular, meanwhile, which in September will enter Colette in Paris, Dover Street Market in London and Isetan in Japan, is a collaboration between Cole; fellow British model Katherine Poulton; knitwear designer Izzy Lane, who runs her own sheep sanctuary in Yorkshire, and Central Saint Martins-trained designer Alice Ashby.

While Cole doesn’t design the knitwear, she acts as the face of the label. However, Poulton said her own experience as a model helped shape the range. “I didn’t even realize how much I’d absorbed from designers until I’d started,” said Poulton, who has worked with designers including Roland Mouret and Anna Molinari and photographers Mario Testino and Tim Walker. “Just seeing [designers] altering things…you spend so long looking at other people’s visions, it’s like an on-site design school. You know how things should fit to the body, how they should hang.”

Poulton and Ashby both said Cole’s involvement helped with the fledgling label’s launch. “It’s definitely made it easier to get the stuff shot,” said Poulton with a laugh. Ashby agreed. “We’re so young, it does take a while to make a name for yourself, so it helps.”

Poulton also said she’d not experienced some of the snobbery she’d expected as a model designing a clothing line. “We were expecting that backlash, but I think people [now] are clued up to models not being stupid,” she said. “Now models are becoming style icons in their own right.”