The financial crisis is sending a chill through Moscow’s once red-hot retail scene. 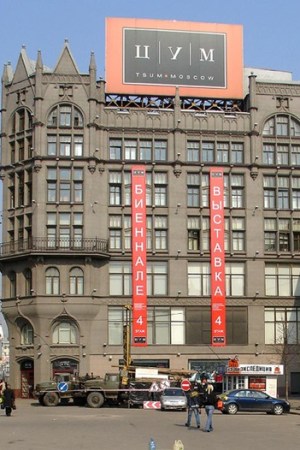 MOSCOW — The financial crisis is sending a chill through Moscow’s once red-hot retail scene.

This story first appeared in the December 17, 2008 issue of WWD. Subscribe Today.

There already has been at least one casualty: A Vivienne Westwood franchise was shuttered, with the owner citing the economic climate as the main reason.

“We’ve noticed a 30 to 40 percent fall in sales,” said Irina Bytchkova, the manager of a Celine store being renovated.

Other firms say once-explosive growth has simply leveled off. “At the moment, there’s no decline in sales. We’re flat, there’s no movement up or down,” Alla Verber, vice president of prominent franchiser Mercury Distributor, said of the upscale Tsum department store, which Mercury also runs. She added: “We’re going to be less aggressive in spring-summer. We’ll decrease our orders by 20 percent.”

The economic crisis has forced some firms, such as Kieselstein-Cord, to refine their Russia strategies. “I am advocating a soft opening followed by a grand opening in the spring,” said Barry Cord of Kieselstein-Cord, which opened a Moscow boutique last month. “The global economic outlook should be more clarified in six months’ time.”

A Tom Ford store scheduled to open this year has been delayed, but Lisa Schiek, director of communications for the firm, said it was unconnected to the financial crisis. A Versace flagship also has been pushed back, though the company declined to comment on the reason.

Back in early summer, Moscow seemed an El Dorado for luxury brands. Dozens of new luxury boutiques had just been opened or were in the pipeline. High oil and gas prices were enriching the country and, notably, an emerging middle class that seemed a new market for designers.

“Moscow is the new epicenter of the retail world,” Cord told WWD at the time.

Today, the picture is a lot murkier. Oil prices have fallen from a high of about $145 to around $44. Russian markets have been hit hard by the financial crisis, with the main exchange shedding around 70 percent of its value since May. Major oligarchs have lost billions. Now the ruble is falling against the dollar and the euro, threatening savings built up by the nascent middle class. With the second devaluation of the ruble in a week on Monday and plunging oil prices, luxury brands are seeing another engine of growth sputter after similar falloffs in India and China. Russia is expected to propose cuts in its oil production at a meeting of the Organization of Petroleum Exporting Countries in Algeria today in the hope that such reductions will help boost prices again.

In the luxury segment, the effects of the crisis are unevenly felt. Some luxury retailers are reporting big losses, though more commonly, they say sales are simply lower, perhaps to the point where growth is at a standstill. A few remain bullish.

The problems facing luxury brands reflect a broader shift in Russian consumer spending. Whereas, before the crisis, Moscow clothes shoppers would pick up two or more items per purchase — today that figure has fallen to an average of around 1.5 items, said Anna Lebsak-Kleimans, head of the Fashion Consulting Group. The average customer’s bill has fallen between 15 and 20 percent, she added.

Since late last year, Moscow has been a magnet for foreign firms. Stella McCartney, Alexander McQueen, Lanvin, Diane von Furstenberg, Emporio Armani and Boucheron, among others, as well as the homegrown Igor Chapurin and Alena Akhmadullina, have opened new stores here. Executives were in rapture over Russians’ love of luxury and exclusivity, and the expansion possibilities in a country that spans 11 time zones.

Retail as a whole, not just high-end, was white hot. Rents on Tverskaya, Moscow’s imposing equivalent of Oxford Street, were reported by Colliers International to be second only to Paris’ Champs-Elysées among European shopping strips, at $1,467.61 a square foot. Real estate firm Jones Lang LaSalle predicted that in 2008-09, 16.1 million square feet of shopping center space would be built in the capital.

But the global crisis exacerbated domestic financial problems, particularly a loss of confidence on the part of foreign investors over Russia’s August war with Georgia and excessive state interference in the economy. Jones Lang LaSalle recently lowered its estimate for retail openings for 2008-09 to 9.7 million square feet, as the financing for major projects dries up. And luxury sales have taken a hit.

Despite the poor economic indicators — some analysts said Russia can expect zero economic growth next year, or even a recession — it’s not all doom and gloom. This crisis may only be a hiccup for Russia, some insiders say.

“Nothing has changed in comparison with the recent year: The crisis has had no effect,” said Yekaterina Vetrova, the manager of a Boucheron store that opened in the summer. She suggested that Russian shoppers “see more value in jewelry than clothes. It’s a way to invest money.”

And at the November opening of a Karen Millen flagship, the mood was downright festive. Total sales in the firm’s 14 stores in the former Soviet Union are equivalent to those in the 28 to 30 stores inside the M25, the highway that encircles London, said Sanjay Sharma, Karen Millen’s international director.

He suggests that Karen Millen’s positioning as an entry-level luxury brand means it will weather the crisis better than other firms, as customers feel they’re getting better value for the money.

Even if sales are declining, in many cases they’re still healthy compared with other markets.

“Three years ago, we started with low hundreds of thousands of dollars as far as business for the first season,” said Alex Bolen, chief executive officer of Oscar de la Renta. “It’s better than 10 times that now.”

It’s not only boutiques in Moscow that depend on Russian luxury shoppers, however. Stores in London and Dubai, for example, can see heavy traffic from Russia-based consumers. For now, those tourist flows don’t appear to be disappearing. A Dubai Tourist Board spokesman in Moscow said he hadn’t noticed a significant decline in holidaymakers from Russia in the second half of this year. In the first part of the year, 165,000 Russians visited Dubai, up 7 percent over last year.

As the holiday season approaches in Moscow, firms will be looking to shoppers such as Marina Yudenich for an indicator of their fortunes in Russia. Every season, Yudenich, a wealthy television presenter and author, picks up around 10 designer items.

“The financial crisis hasn’t changed that,” she says. “People are buying what they bought before.”