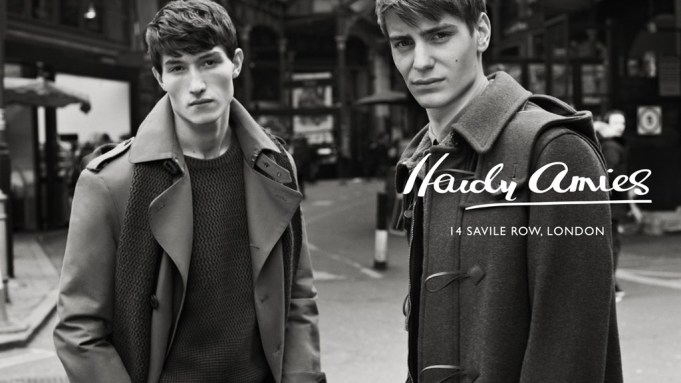 Fung Capital, the family’s private investment vehicle, which owns Hardy Amies and other luxury brands, has over the last few weeks purchased Kilgour, and is in negotiations to acquire a third Savile Row tailor in the next six months.

The three men’s wear companies will be part of a new portfolio called Savile Row Brands, whose products will sell through high-end department stores and online outlets worldwide.

“Our aim is to acquire small or dormant Savile Row institutions and develop them into global ready-to-wear brands,” said Tony Yusuf, chief executive officer of Savile Row Brands, during an interview at Hardy Amies’ grand townhouse headquarters on the street.

“We want to make a business out of these Savile Row jewels, and create a showcase of contemporary British [tailored clothing],” said Yusuf, adding that he was looking to stock the new portfolio with at least five tailors.

Yusuf said the brands in the portfolio will be positioned as “contemporary” tailored clothing, to compete in a space occupied by names such as Ermenegildo Zegna and Hugo Boss. He said the rtw collections will offer suits, weekend wear, formalwear, outerwear, shoes and accessories. Prices will start at about $895 for a suit, $145 for a tie and $185 for a shirt.

And while there are no plans for a worldwide retail rollout, Yusuf and his team said the brands would all have stores on Savile Row.

Next June, a new Hardy Amies shop — separate from the townhouse — will open on Savile Row, as the brand steadily builds its profile in rtw and bespoke under new design director Mehmet Ali.

A new, black-and-white ad campaign, shot by Roger Rich, will break in the December issues of magazines such as British GQ and Wallpaper. The tailor has always attracted highfliers, including Lord Nelson, Sir Winston Churchill and Queen Elizabeth II, and it shows no signs of stopping. One of the company’s latest bespoke customers is the new U.S. ambassador to the Court of St. James’s, Matthew Barzun.

Kilgour, which Fung Capital purchased from Dubai-based JMH Group in a private transaction, will also open a newly refurbished unit on the row in June.

JMH Group, a supplier of chemicals to the construction industry, purchased Kilgour in February 2008, but never gained traction with the brand, a great Savile Row success story under former owners KFS Group. The latter had ramped up the rtw side of the business, and attracted clients such as Jude Law and Daniel Craig.

Yusuf said that Kilgour plans to reveal the name of its new creative director later this year, and will be ready to show its new collection in January.

In addition to the shop openings, Yusuf said that Savile Row Brands plans to open a “center of excellence” on the street that will teach “a new generation about the art of bespoke and make sure the skills don’t die.” That is also set to open next year.

Yusuf, a former Savile Row tailor who went on to cofound and run Italy-based label John Richmond, said that in building Savile Row Brands, he is sensitive to the other brands on the street owned by the Fung family’s companies.

“We are looking at spaces where the public companies are not operating. I am mindful of our brands’ positioning and will make sure there is no crossover,” said Yusuf, stressing that his business model is wholesale, rather than retail, focused.

Gieves & Hawkes, at No. 1 Savile Row, and Kent & Curwen, which will open next month at No. 2, are both owned by Trinity Ltd., a Hong Kong-listed company that also owns fashion house Cerruti.

Trinity, like sourcing, manufacturing and distribution giant Li & Fung Ltd., which is also publicly listed in Hong Kong, is a part of the Fung Group, owned by the Fung family.

Fung Capital is the family’s private investment vehicle, and is run separately from the rest of the Fung Group. In Europe, Fung Capital owns brands such as Sonia Rykiel, Robert Clergerie and Delvaux.

Yusuf believes the time is right for investments in Savile Row tailoring and heritage — and he is by no means alone.

Patrick Grant has made a business reviving old Savile Row tailors E. Tautz and Norton & Sons, and this season, he is working with British department store Debenhams on a line called Hammond & Co., inspired by another former Savile Row name.

According to Savile Row Bespoke, the organization that represents tailors on the street and in the immediate vicinity, total bespoke sales in 2012 were 30 million to 32 million pounds, or $45 million to $48 million, which represents a 28 percent increase since 2006.

“Men want to know about the form and function of clothing. We like stories — we’re geeks at heart — and Savile Row has the best stories to tell,” said Yusuf.