It was a grueling season for fur retailers like Dittrich Furs, Canadian Fur Co., and Jacques Ferber Furriers. 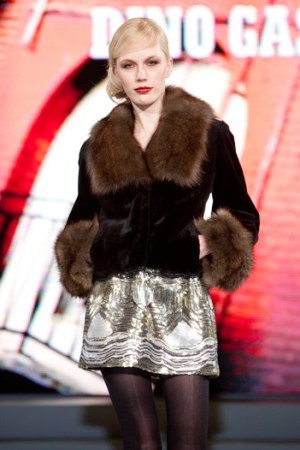 MONTREAL — It was a grueling season for fur retailers across North America, judging from comments made by buyers attending the North American Fur and Fashion Exhibition here May 3 to 5.

Most said sales were down significantly from last year, which wasn’t all that stellar, and markdowns kicked in earlier than usual. On the plus side for exhibitors, many retailers carried less inventory and now have to replenish their stores.

“It wasn’t a wonderful year, but we got through it,” said Paul Twigg, owner of Lazare’s Furs of Windsor, Ontario, one of the few retailers with a positive view. “We had to listen to our clients and fortunately we had what they wanted, which was a huge swing towards casual pieces and jackets. We sold a lot of sheared mink and also added other products like Italian cashmere coats and jackets.”

Twigg was shopping NAFFEM for fashion items to spruce up his inventory.

Lazare’s Furs had a showroom in downtown Detroit, which still accounts for about half his sales. But the downturn in the economy there forced to close the showroom due to lagging sales and open another one in the suburb of Southfield, Mich., in a joint venture with a jewelry company, which exposed him to a different clientele.

Another Detroit fur retailer, Dittrich furs, also has been struggling, according to owner Hal Dittrich, who said his profit was down “substantially” due to early and larger markdowns than normal.

“There are a lot of people losing their jobs and tons of bankruptcies. I plan to buy less [at NAFFEM] and stick with the people I know,” said Dittrich. “The good old-fashion long-haired mink is by far our best seller.”

For Keith Rosenstock of the Canadian Fur Co. Inc. in Pittsburgh, business was about the same as last year for the first nine months of the season, then dropped 15 to 18 percent during the last three months. “My inventory is a little higher, but sheared mink sales were stronger than last year, and that trend should continue. My shearling and fur trim business has become more important due to changing lifestyles,” he said.

Business in Philadelphia was equally dismal, according to Andre Ferber, owner of Jacques Ferber Furriers there, who said sales were down by double digits, but wouldn’t elaborate. “It was the most difficult season of my life. Even people with large portfolios who experienced major losses in their net worth feel they have no money,” he said.

Because the economy tanked just when the prime selling season began in November, Ferber was forced to take earlier and deeper markdowns. “Interestingly enough, we moved a lot of merchandise, but most of it was off price, so margins weren’t there, but our service business [cleaning, storage and alterations] did well,” he said.

As a result, Ferber’s inventory is low, so his open-to-buy at NAFFEM was “healthy” and he was looking at Jean Crisan and Paula Lishman for restocking. “We do a lot of our own manufacturing, so we come to Montreal primarily for beaver. Prices overall may be softer, but not significantly,” he said.

The economic story was similar in the South, where sales were off 12 percent from a year ago at Henig Furs in Montgomery, Ala., owner Mike Henig said. Bright spots included basic mink jackets and coats, but the same could not be said of sheared beaver items. “We carried over a lot of inventory, even though we didn’t buy a lot for this past season,” he said. As a result, his open-to-buy was considerably smaller at NAFFEM, where he mostly bought from local manufacturers, including Wolfie.

“I do a lot of buying in Hong Kong and Greece, but almost 100 percent of my accessories like hats, gloves and headbands are done at NAFFEM,” said Henig.

The situation was the same in Western Canada, where sales were down 30 percent at Benzing Charlebois Furs in Calgary, Alberta, according to owner Grant Ritchie, who is carrying 25 percent more inventory than normal. “We’ll be cautious at NAFFEM, because we see another soft season ahead. We’re looking for fashion pieces and highlights, because we still have basic pieces left, mostly mink and sheared beaver,” he said.

NAFFEM itself was two-thirds the size it was last year, with many European exhibitors opting not to show in Montreal, according to Alan Herscovici, executive vice president of the Fur Council of Canada, which organizes the show. “They have their own problems in Europe and we’re at the tail end of their buying season, so they chose to stay home. But most of our North American exhibitors are here,” Herscovici said.

One new exhibitor this year was the North Atlantic Fur Group of Newfoundland, which specializes in sealskin coats, jackets, boots and accessories made in Italy. Company president Michael Nielsen said, “I feel we’re different from most other exhibitors because we also offer fur accessories.”

Fur prices have not been immune from the recession, with mink down 40 percent from a year ago, according to Per Knudsen, sales manager for Kopenhagen Fur of Denmark, the world’s largest auction house for mink pelts and a major supporter of NAFFEM for the past five years. “The financial crisis has a lot to do with it and although China is still a strong market, demand from Russia was lacking,” he said.

Many in the industry fear China will gradually take over the fur industry like it has in the clothing sector, leaving North American fur manufacturers in its wake. “It’s a wake-up call to become more innovative,” said Patricia Christensen, marketing director of Kopenhagen Fur. “Maybe we can’t stop it, but we can slow it down. We have to challenge manufacturers to think ahead.”

In the meantime, more furs produced in China are staying in China thanks to growing domestic demand, Christensen noted.

The Fur Council of Canada has launched a Fur is Green campaign to dispel some of the myths and negative publicity surrounding its industry. It will appear in newspapers, billboards and in-store material and on furisgreen.com.