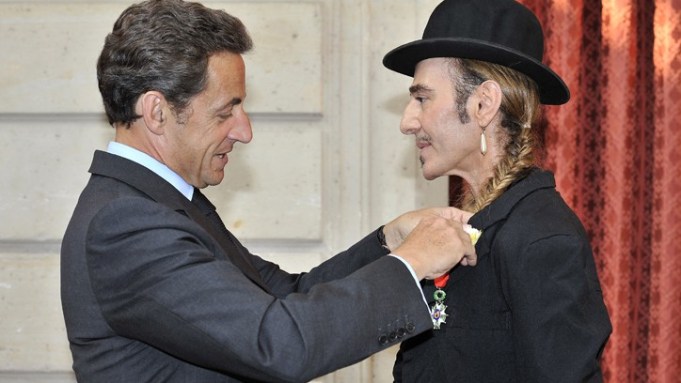 PARIS — French President Nicolas Sarkozy welcomed an English “fashion revolutionary” to the Elysée Palace on Wednesday night, and decorated John Galliano as a Chevalier of the Legion of Honor.

To be sure, Dior’s couturier, on the eve of the men’s shows and couture week in Paris, made an unconventional fashion statement — his long locks split into flat, featherlike braids under a broad-brimmed hat, his chest bare under a vest and elegantly rumpled tailcoat.

The intimate gathering reunited a spectrum of talents and friends that have accompanied the Gibraltar-born designer on his rise from Central Saint Martins to the pinnacle of high fashion, from milliner Stephen Jones and DJ Jeremy Healy to production designer Michael Howell and model Scott Barnhill.

Manolo Blahnik marveled at the depths of Galliano’s creative well. “I’ve always admired what he’s done, and yet I feel like he’s just getting started,” he said.

Bernard Arnault — the head of LVMH Moët Hennessy Louis Vuitton who plucked Galliano in 1995, first for Givenchy and a year later for Dior — and Sidney Toledano, Dior’s chief executive, beamed as Sarkozy teased Galliano about his “enfant terrible” reputation, and then pinned the medal on his lapel.

“He taught me how to walk when I was 14,” said Kate Moss, jutting her hips forward, her hair in a chignon, wearing a one-shouldered Dior dress. Then she rushed to hug the hairstylists Odile Gilbert and Julien d’Ys and makeup artist Pat McGrath, who help bring Galliano’s fantastical visions to life on the runway.

In a speech that mingled English and French, Galliano was as brief and sincere as his fashions can be wild. “I am honored and humbled to receive this award that I share with you all,” he said.