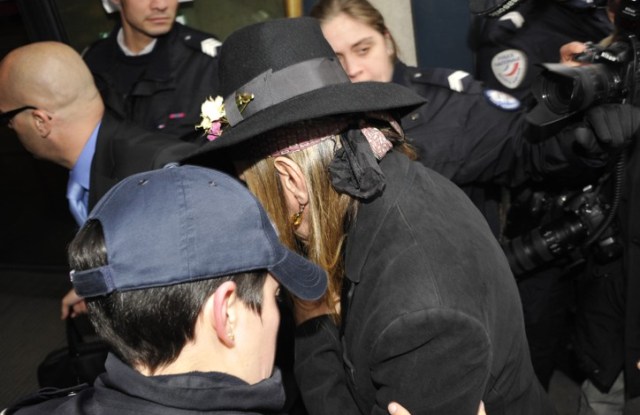 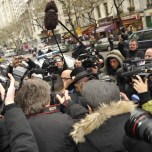 PARIS — John Galliano’s battle to fend off allegations he uttered anti-Semitic and racial slurs grew tougher Monday after a second complaint was filed with Paris police — and an amateur video circulated online in which an apparently inebriated Galliano appears to say, “I love Hitler.”

The escalating crisis is fast becoming a media circus and a public relations nightmare, ratcheting up the pressure on Christian Dior, which suspended Galliano of his duties Friday pending the outcome of a police inquiry.

Galliano’s arrival at the police station of Paris’ third arrondissement on Monday to meet his accusers unleashed pandemonium among photographers, but the afternoon concluded without immediate word if the case will advance to the courts.

Dressed in a dark coat and a broad, black felt hat bearing a sprig of fresh flowers, Galliano entered the police station with his head bowed. The designer had been summoned by the Paris public prosecutor to talk with Géraldine Bloch and her companion, Philippe Virgiti, who filed charges Thursday following an incident that night at La Perle cafe, where the designer is alleged to have hurled anti-Semitic, racial and other insults at them.

Police sources, speaking of the incident, said Galliano, who was briefly detained afterward, was inebriated, with an alcohol reading of 1.01 milligrams of alcohol per liter of exhaled air. Galliano claims he never uttered any racist or anti-Semitic slurs, furnished witness statements to back his case and subsequently filed a claim of defamation, insult and menace against Bloch and Virgiti.

The designer was also heard Monday regarding a second, separate complaint filed to Paris police by an unidentified woman on Saturday. It concerns an incident that reportedly took place at La Perle in October 2010, during which Galliano allegedly made anti-Semitic remarks.

On Monday, journalists had to wait five hours in the cold until Galliano finally exited the police station with his lawyer, Stéphane Zerbib. Chaos erupted. The two men ignored questions reporters shouted at them as they were bundled into a car.

According to a spokeswoman from the prosecutor’s office, the French legal process typically involves an ongoing police inquiry, including interviews of more witnesses. She said that step could last through the end of this week. Proceedings might then be passed to the prosecutor’s office, which would determine if the infraction claims are sound. Should the prosecutor’s office decide there is a case to be tried, it might go to court or be decided in an out-of-court settlement, among numerous possibilities.

“I’m not sure what will be decided.…If it ever does go to court, it could take weeks, maybe even months,” she said.

Dior remained silent on Monday’s developments, even as the clock ticks down to two of the bigger shows of Paris Fashion Week: Dior on Friday and John Galliano on Sunday. Dior controls the Galliano business.

It is understood management wishes to go ahead with both events to support the teams of people who mount runway shows — and to win the press coverage and wholesale orders they generate. But the delicate situation could make such large-scale media events a risky proposition.

Dior stressed the company has a policy of zero tolerance regarding racism and anti-Semitism.

Meanwhile, the blogosphere erupted anew Monday after the British tabloid The Sun posted an amateur video it says depicts Galliano in a row with his neighbors at a cafe. In it, the designer makes references to people being “gassed” and utters expletives censored by The Sun. The context, timing and authenticity of the filmed incident could not be verified.

Vogue Italia raced to Galliano’s defense, posting a screen grab and link to the explosive “Hitler” video on its Web site under the headline, “John Galliano: Was It a Set-Up?”

The Vogue.it posting noted that Galliano was “clearly provoked, and filmed, while obviously inebriated.” It added that, “We condemn the racist content of his statements (there’s even the hypothesis of Nazi sympathy) but we consider this video to be proof of extenuating circumstances.”

While Galliano has yet to be charged, let alone proven guilty, a debate is already under way whether the 50-year-old designer will be able to recover from the crisis. Fashion has shown it can have a short memory, however.

Galliano’s friend Kate Moss was immediately cut loose by fashion advertisers such as Burberry and H&M after a photo in the London Daily Mirror in 2005 allegedly showed her doing lines of cocaine. But Moss’ mea culpa and rehab stint prompted a quick re-embrace by the fashion world.

Still, the stigma of even partial guilt around a possible hate crime could be hard to shake.

The Galliano company — which has been showing strong momentum recently — could be most affected by the fallout. Its brand image is closely tied to the iconoclastic talent, including newspaper prints featuring cartoon depictions of the designer, and its business is based mainly on license agreements with a range of Italian companies. The partners include Gibò Co. SpA for the women’s and men’s designer collections, Ittierre for the Galliano secondary line, Marcolin SpA for eyewear, Diesel for children’s wear and Morellato for watches.

As for Dior, the handicapping over a possible successor to Galliano should he fail to surmount the accusations has already begun among fashion circles. Givenchy’s rising star, Riccardo Tisci, is considered a front-runner, and he would follow the same path as Galliano, who spent a year as successor to the retiring founder, Hubert de Givenchy, before moving on to Dior.

Other in-house fashion stars at the disposal of Bernard Arnault, chairman and chief executive officer of LVMH Moët Hennessy Louis Vuitton and Christian Dior SA, would include Marc Jacobs, who is renegotiating his contract at Louis Vuitton, and Celine’s Phoebe Philo.

As reported, the list of potential candidates could range from established talents such as Hedi Slimane, Tom Ford, Lanvin’s Alber Elbaz and Balenciaga’s Nicolas Ghesquière to buzzy new names like Paris-based Haider Ackermann.

A dismissal of Galliano would rob fashion of one of its greatest showmen, perhaps marking the end of an era of runway spectacle, especially after the suicide last year of Lee Alexander McQueen, another British talent prized for theatricality.

Galliano’s famous inspiration trips to India, China, Japan, Turkey, Egypt, Middle Europe or within France brought rich rewards to his audience — and created some of the most arresting fashion show visuals in recent history.