Caroline Wozniacki and fellow players were decked out by British designers at the annual Women's Tennis Association party at Kensington Roof Gardens. 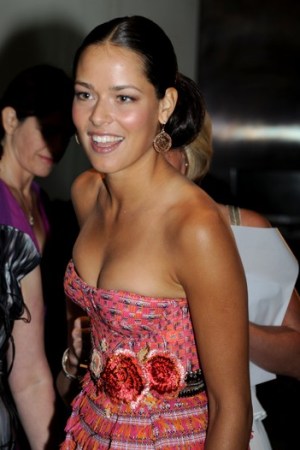 And this year there was a fashionable slant to the occasion, as the British Fashion Council had partnered to dress a number of players in British designers’ wares. Among the players, Maria Sharapova and Laura Robson wore Alexander McQueen, Serena Williams wore Burberry and Ana Ivanovic wore Matthew Williamson.

Meanwhile Caroline Wozniacki, who’s been the face of Stella McCartney’s Adidas line since 2009, stayed loyal to her designer pal.

“Stella made this dress for me — it’s amazing,” said Wozniacki, dressed in a one-shouldered, pleated black asymmetric number. “She’s always listening to what I like and makes things that flatter my figure.”

In fact, working with the designer has given Wozniacki something of a taste for the sartorial.

“[Designing a collection] is something that interests me a lot — it would be fun to do one day,” she mused. The player, who’s ranked as women’s tennis’ world number one, cut a relaxed figure despite the fact that the championships kick off Monday.

“I’m feeling good — it’s nice to be back here and Wimbledon is a special event,” she said. “I’ll try and enjoy the party, but not get back too late,” she added with a smile.

British player Anne Keovathong — who was wearing a sleek Helmut Lang design — had a similarly laidback approach to the tournament.

“It’s all to look forward to,” she said.

But the party wasn’t exclusively for the athletically inclined. Guests including Henry Holland, Holly and Sam Branson, Tali Lennox, Eliza Doolittle and Twiggy sipped on distinctly un-sporty beverages — Champagne and Espresso martinis — and offered their support from the sidelines.

“I love the tennis, I watch it every year,” said Shingai Shoniwa of The Noisettes. “In fact, I’m off to play Serena later,” she deadpanned.