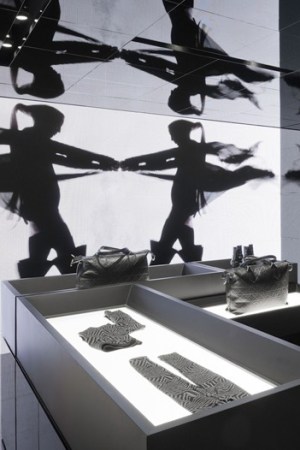 The 658-square-foot store, which opened Saturday, is located on Ice House Street in the city’s Central area, near avant-garde peers Commes des Garçons, Ann Demeulemeester and Martin Margiela. As such, Pugh felt he needed to create a strong sense of identity to stand out.

“Because it was my first store, I knew I had to do something that was very me. So I went back to my runway shows and thought, What could be more me than a black box? But instead of doing something very one-dimensional, I decided to play around with a lot of optical illusions that will change the space according to reflections. Contrasting themes such as shiny and matte, black and white, hard and soft are also an important part of my style. I wanted to take these ideas and create something that would make sense in a retail environment,” Pugh said.

The shop is masked in British-imported jet black rubber paint while glossy black tiles line the floor and walls to create a “grid-line” effect. The clothing racks are set into the wall, with a matte rubber inset that juxtaposes against the shiny surface of the tiles.

Continuing the idea of contrasts, Pugh shows his lighter side in a fitting room with padded leather ash gray walls, a light gray carpet and an opulent white light box hanging from the ceiling. The boutique’s all-black facade will bear no window display. Instead, the large glass window will look through to the LED wall at the back of the shop, which currently displays graphics and videos from his fashion shows. Over time, Pugh said the screen will act as a platform for him to strengthen his brand identity by showcasing films he frequently produces with friend and filmmaker Ruth Hogben, as well as collaborative art installations.

“I’ve been talking to Nick Knight, who runs a lot of live streaming on Showstudio, and I was thinking I can connect the screen to the Internet and perhaps put a camera in my studio. Because the screen is part of the architecture of the store, we can essentially curate the wall. And when the shop is shut, it can still communicate to the audience outside,” he said.

Meanwhile, the experimental designer denied rumors that he’s heading to Thierry Mugler. “There is no truth to them at all,” he said, shaking his head. “Rumors are rumors. It’s not going to happen.”

Pugh admits that opening a stand-alone store was not in the cards, but when he was approached by Hong Kong-based retailer I.T. Group last year, the opportunity was too good to pass up. With this venture, Pugh will now be selling exclusively through I.T. Group and will no longer be available at other retailers in Hong Kong.

But Pugh said he is confident that this upscale positioning of his brand in the Hong Kong market will be a success. “I like that there is Margiela just up the street, Gucci around the corner and Hermès across the road. It creates a sense of luxury around the brand and what I do that may not be so apparent in other cities, such as London. What I do is of a certain ilk, but it’s still very sophisticated. And there is a broad ranging type of person who can buy my things. Hong Kong is ready for it,” he said.

As of now, there are no plans for more stores, but the designer did mention he would eventually like to have one in London. “London or Paris,” he said. “Maybe Paris, Paris is more chic.”