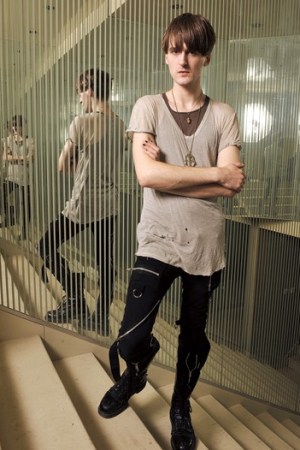 The alumni of Central Saint Martins have a long tradition of adding a dash of gritty excitement to the uberpolished Paris fashion scene. Like John Galliano and Alexander McQueen before him, Gareth Pugh created a stir when he made his debut on the opening day of Paris Fashion Week. Or should we call it an invasion? The designer’s sleek black-and-white lineup presented at the Palais de Tokyo fused romantic, armor-inspired silhouettes and gargantuan ruffs with a  hard, futuristic edge that left his models resembling Elizabethan Stormtroopers. Key pieces included tailored, armoresque jackets, body-conscious dresses with horizontal pleats that resembled air-conditioning vents and secondskin monochrome catsuits.

This story first appeared in the October 27, 2008 issue of WWD. Subscribe Today.

“It’s odd to see who goes for things, like one of my PVC coats that was bought by Marilyn Manson, a chic art dealer from New York and Róisín Murphy. It’s quite sporadic,” says the designer, who also has outfitted Kylie Minogue on several occasions. “I like the idea of someone like Daphne Guinness wearing my pieces, someone who likes to make a statement with what they wear.”

As London’s dark prince of avant-garde, Pugh is known for his high-impact, carnivalesque shows that tend to resonate more with fashion editors than the buying public. His clothes are carried in about 22 doors around the world, including Barneys New York, Browns Focus and Dover Street Market in London and Colette in Paris. Pumping up the visual impact during the label’s early stages—such as the use of balloons to accentuate body parts—is a vital way of cultivating an iconic design identity that Pugh says can ultimately filter down.

“You need something that backs up a label to set it apart, kind of like a heritage,” muses Pugh at the tail end of Paris Fashion Week, hunched over a computer at his sales base at the Rick Owens headquarters. “For someone who is coming to grips with sales, all of that legwork set me in good stead for building a house now. After college, my experimenting was done in a very public  way. There was no business acumen, no forethought, I was just doing it, [as] production and sales was never an option….When you can only afford to present 15 outfits, it has to represent the essence of [your vision],” he continues.

“Gareth will certainly become more well known,” predicts Julie Gilhart, senior vice president and fashion director of Barneys. “You can see his development from his earlier shows up until the highly polished show he just did in Paris. [His] designs have a powerful strength and draw you in. It’s similar to the same customer that bought Prada first, or Helmut Lang or Balenciaga. They want to be there when something new is happening,” Gilhart continues. “He is developing fast.”

Combinations of black and white, which the designer prizes for the “friction” they create, are already a Pugh favorite. “It’s like putting a cat and dog in the same room,” he says. Pugh spent years designing clothes on a shoestring, first under the notoriously ferocious tutelage of Central Saint Martins course director Louise Wilson, and then as a penny-pinched young graduate designer on unemployment benefits.

Pugh’s lack of resources forced him to set up his first studio in a warehouse squat in 2004, which he shared with a band of creative peers including current Dazed & Confused fashion editor Katie Shillingford and Matthew Stone, who does Pugh’s show music. Evicted after six months, the coalition next invaded a vacant building in Peckham that was to become a Warholian Factory of sorts.

The designer ultimately set up camp in a former fitness center one floor down, which was still fitted with two saunas, running machines and a mirrored dance room. It was there he created his first off-schedule show, as part of the group Fashion East in 2005, before going on to stage his first solo show for London’s fall 2006 collections.

Pugh now credits Rick Owens’ wife, Michelle Lamy, whom he calls his “fairy godmother” and who owns 49 percent of Pugh’s business, for helping him navigate  the commercial world. The pair first met when Lamy invited Pugh to visit her in Paris in spring 2004, shortly after he’d graduated.

She has orchestrated Pugh’s production for the past three seasons, starting with made-to-order atelier pieces. More recently, she negotiated production terms with Pugh’s Italian factory, which included establishing a patternmaker solely dedicated to his collections.

Winning the 150,000 euro, or $201,630 at current exchange, ANDAM prize in June allowed Pugh to stage his show in Paris this season, although not without drama. “It was nice showing on the first day, as we didn’t have to fight for models, but [the countdown] was hideous. There were probably more people backstage than there were actually watching the show. The clock was ticking and  everything was last minute, but there’s a point where you just have to send it out,” he says. “Something as ethereal as a 10-minute [show] will last forever in images. Those 10 minutes define you as a designer. And it’s important to get it right.”