Jean Paul Gaultier is poised to get back into home furnishings. 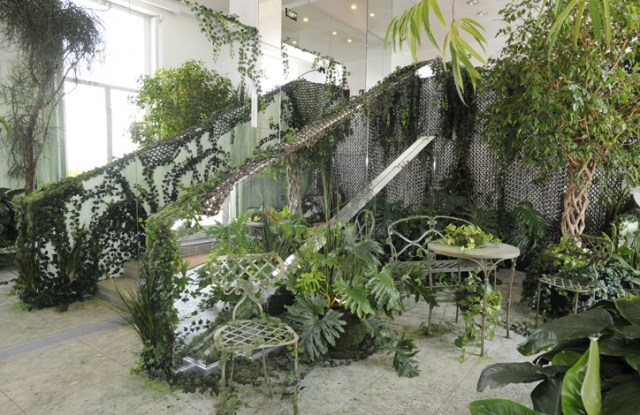 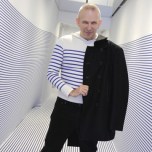 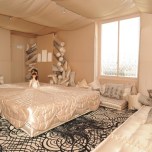 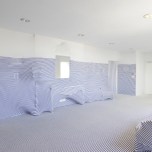 PARIS — Jean Paul Gaultier is poised to get back into home furnishings, with a collaboration with upscale French furniture brand Roche Bobois due to be unveiled over the coming months.

As an appetizer, Roche Bobois sponsored the couturier as the latest guest invited to renovate Elle Decoration’s suite here. The apartment, which last year was decorated by Maison Martin Margiela and in 2008 by Christian Lacroix, is situated on the top floor of Paris’ architecture museum in the Trocadéro district.

It was hard to distinguish Gaultier from the scenery as he bounded into the site on Wednesday, clad in a Breton T-shirt. To dizzying effect, the designer had sheathed the entry hall and salon — furniture and all — in nautical striped stretch fabric, letting it fade to white in one corner, as if bleached by the sun.

The designer let Mother Nature run riot in the central hall, which resembles an abandoned conservatory. Ivy coated a staircase leading to a lower patio level, while a white sofa was dappled with moss.

“It’s a jungle in Paris. It’s nature, ecology, plants — let’s say, reality,” said Gaultier, who was inspired by a ruin he once discovered in a garden in Rome, which had been taken over by nature.

“I once designed a vegetal wedding dress, but that only lasted for two weeks before withering,” he recalled, surveying the space. “This, too, is all about dressing; it’s always about fashion.”

The designer’s cheeky side surfaces in the boudoir, baptized the “flesh room” by Gaultier after its skin-pink satin walls. As its centerpiece, a kitsch old-fashioned doll sits atop a giant bed in a corset dress, her flesh-tone quilted satin skirt splaying to form the bed’s cover. Underfoot is a trompe l’oeil fishnet carpet, while calligraphy-patterned pillows are piled along the walls. Three oblong silk-sheathed wall flaps lift to reveal shots of Gaultier disguised as Dracula.

“I’ve always been a bit of a vampire, it’s my hidden side,” said the designer, who based the design of the vast patio area on optical illusions. There, in an ode to Paris, Gaultier has positioned mirrored tiles and plinths to capture myriad reflections of the site’s imposing neighbor, the Eiffel Tower.

Gaultier has done home decor before and collaborated with France’s VIA in 1992 to produce items like the Roman chariot-style armchairs dotting the lobby of his Paris headquarters.