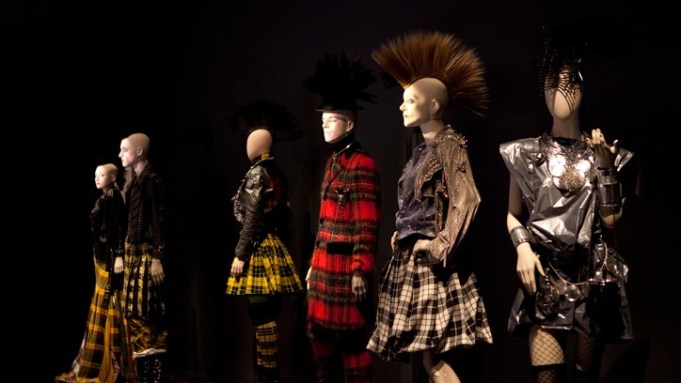 MONTREAL — The initial question put to Jean Paul Gaultier at the prelaunch of his first world retrospective opening here today at the Montreal Museum of Fine Arts was: Why did he decide to do it?

“I didn’t want to do it, because a retrospective usually follows your funeral and I’m still alive, but Nathalie Bondil [director and chief curator at the MMFA] convinced me. The purpose is to show what I want to say through clothes. It is to make clothes that you will love and wear. It’s a good way to show my themes,” the designer said.

The exhibit, entitled “The Fashion World of Jean Paul Gaultier: From the Sidewalk to the Catwalk,” features 130 pieces from Gaultier’s collections dating from 1976 when he launched his first prêt-à-porter collection before founding his own couture house in 1997.

Most pieces have never been shown in public before, including Madonna’s conical bras and photos by Andy Warhol. The entire exhibit contains over 500 works of art, including haute couture, prêt-à-porter, images and photographs.

Deciding what to include in the show was left to curator Thierry-Maxime Loriot, who perused more than 150 collections and thousands of pieces before settling on the finalists.

“I wanted to tell a story and show the passion of Jean Paul Gaultier,” said Loriot, who modeled for Burberry beside Kate Moss more than a dozen years ago. “He’s a pioneer in his field and I wanted all original pieces with a balance between prêt-à-porter and haute couture.

“I also wanted to show how important he’s been in the last 30 years, but also to show how he’s still relevant. Alexander McQueen, Marc Jacobs and Tom Ford have all been influenced by him.”

One of the unique pieces is a leopard skin dress that took over 1,060 hours to make, according to Loriot, who also included costumes Gaultier made for films. There’s also a white tutu with Converse sneakers, black leather jacket and studded bustier from Gaultier’s first collection of spring-summer 1977.

The onetime “enfant terrible” of fashion remains in touch with his inner child, making him one of the most humorous and imaginative creative minds in today’s fashion world. That’s what prompted Bondil to invite the designer to stage a look back at his multidisciplined career.

“I wanted to create an exhibition on Jean Paul Gaultier more than any other couturier, because of his great humanity,” said Bondil. “Beyond the technical virtuosity resulting from exceptional expertise in the various skills involved in haute couture…he offers an open-minded vision of society…in which everyone can assert his or her own identity, a world without discrimination, a unique ‘fusion culture.’”

Asked if fashion can be an instrument of social change, Gaultier said fashion is more a reflection of social change than a game changer. He also lamented the overproduction and overconsumption in today’s world and chastised other designers who pay artists to wear their clothes.

“In the 1980s, you lent artists your clothes. Now they pay them, which destroys us,” he said.

Does he consider his creations works of art as well as fashion pieces?

“I don’t think my work is art,” said the designer. “We are in the service of men and women. Some see clothes on women as a performance like Lady Gaga.”

The exhibit drew the biggest contingent of international media as 150 journalists were accredited, compared with the average of 45 to 60 for a major exhibition. A similar retrospective in 2008 on Yves Saint Laurent, which opened days before his death in 2008, drew 140,000 visitors. Bondil wouldn’t speculate if Gaultier will draw more, but anything over 100,000 is considered a success.

Visitors will be wowed from the get-go. At the top of the grand staircase to the second floor where the exhibit takes place, Gaultier’s name is written in white neon letters surrounded by two groups of mannequins — one in his famous sailor stripes, the other with halos of stained glass, crochet or golden spikes.

The mannequins appear human and a little creepy, winking, moving their jaws and even speaking. Their faces are of real people, including Montrealer Melissa Auf der Maur, a former bass player for the pop group Hole. The faces were filmed and projected onto the mannequins, made by local company Jolicoeur International.

“It’s a phenomenal presentation and every bit as complete and exciting in real life as we expected,” said Kevin Tucker, curator of decorative arts and design at the Dallas Museum of Art, where the exhibit will be shown from Nov. 13 to Feb. 12, after it closes here on Oct. 2. It then moves to the de Young Museum in San Francisco at the end of March through July.