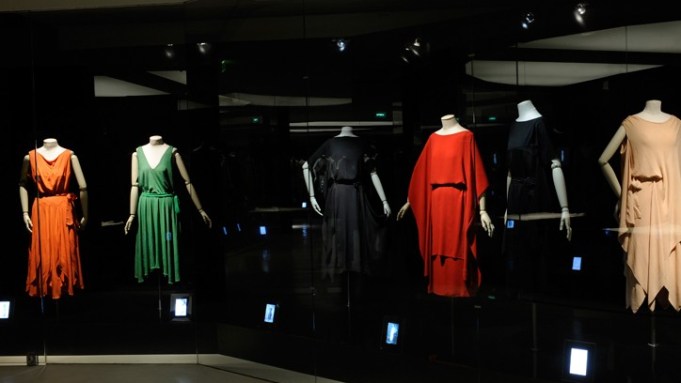 Spanning 1912 to 1939, the exhibition, “Madeleine Vionnet, Fashion Purist,” which ends Jan. 31, is likely to spark a Vionnet renaissance across the runways.

Vionnet herself supplied most of the show’s content, having in 1952 bequeathed her house’s patrimony, including 122 prototypes, 750 patterns and 75 photo albums compiled for copyright purposes, to the French Union of Costume Arts, which Les Arts Décoratifs conserves. The gesture was unheard of at the time. “She had made the conscious effort of choosing these pieces and keeping them for so long,” said the museum’s curator in chief, Pamela Golbin, of the archive, which has just undergone an extensive restoration program carried out by the museum and sponsored by Natixis.

The show opens with one of Vionnet’s most indispensable work tools, a 31.5-inch-high articulated wooden sculptor’s mannequin, which also served as the model for the exhibition’s mannequins. The exhibit follows with Vionnet’s early experimentations with structure and the bias cut, which she pioneered. The technique is explored chronologically through themes, from fringing to transparency. The second floor groups key looks from Vionnet’s collections between 1930 and 1939. “The thing that stands out is the coherence of her [work]….Every piece has a raison d’être yet also works together [as part of a collection],” said Golbin.

Vionnet is known as a “geometer of couture” and emancipator of the female body, since in celebrating the natural female form, her feather-light bias-cut draping unshackled women from the corseted dress conventions of the day. She based her purist designs on three essential forms: the square, the rectangle and the circle, which she would then knot, gather, cut, pleat and twist to form new constructions.

“In the day, bias-cut [fabric] was mainly used for linings.…The fact that Vionnet made whole garments [using the technique] was almost an affront, as it was so costly. It’s already [a case of] modern luxury being defined,” observed Golbin. “You didn’t need lining, buttons, hooks and eyes, so these are the lightest of garments. It’s all about structure first, which is probably why [her clothes] look so modern.”

Aside from descriptions about what’s on display, for each dress there’s a mini digital frame showing archived sketches and photos of models dressed in the piece, taken from Vionnet’s bequeathed books.

Sporadic installations throughout the show serve to reveal the “making of” process behind certain dresses. A central exhibit, for example, houses an example of Vionnet’s iconic handkerchief dress laid out flat on a mirrored glass block. A digital video demonstrates how squares of fabric come together to form the dress.

Examples of ornamentation are exhibited on the gallery’s left side, meanwhile. “It was a time in history where people wore heavy embroidery. She has achieved the same effect with the most reduced of elements,” said Golbin, adding that Vionnet also viewed color as a way of ornamenting a dress. Case in point is one 1922 silk frock with geometric panels in degradations of browns and beiges, one of several collaborations by Vionnet with the artist Thayalt.

One elaborate Lesage-embroidered purple-and-red dress, featuring horse motifs inspired by the negative and positive designs on Greek vases, stands next to a mini replica version on a doll resembling Vionnet. It was a gift to the designer from Albert Lesage in 1921 for the opening of her first U.S. store.

While many of the show’s creations are in black-and-white, saturated monochrome hues abound. “She liked reds like lipsticks and greens and blues like eyes; nothing’s wishy-washy. Everything’s clear and to the point,” said Golbin.

Known for avoiding the limelight, Vionnet also makes a couple of appearances in the exhibition. Silent black-and-white footage filmed in 1922 shows Vionnet demonstrating one of her copyrighted innovations. The designer can be seen triumphantly stamping her thumbprint onto the label on one of her frocks for the camera. While on the second floor, Vionnet gazes down from a 1933 portrait by Jean Dunand.

The exhibit ends with a delightful projection of black-and-white photos of the designer’s frocks on models, accompanied by recorded extracts of Vionnet speaking.