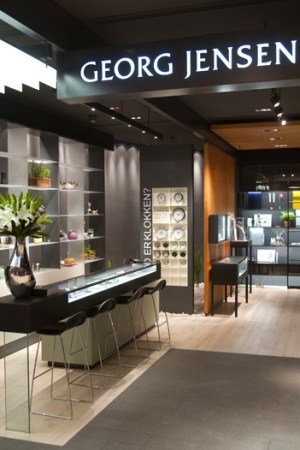 The opening festivities Monday kicked off with a royal visit from Denmark’s Crown Prince Frederik, who was in town for Denmark Day at the World Expo. Ulrik Garde Due, Georg Jensen’s president and chief executive officer, gave the prince a tour as a harpist provided musical accompaniment. Later that evening, the Danish Boys Choir and a couple of representatives of the Royal Danish Ballet performed.

The 3,500-square-foot store, designed to resemble a Scandinavian home, is located in the new IFC mall in Lujiazui, Pudong’s financial district.

“We see this as not only a great store, but a gift destination. It’s part of our new strategy,” said Garde Due. “Shanghai being the financial center of China, [the flagship] will really make us very successful here.”

The store is the brand’s 10th new unit designed to showcase a luxury Scandinavian lifestyle beyond jewelry and watches. Designed by London-based architects Mark Pinney Associates to resemble a warm and inviting Danish home, the store features a sitting area, dining area, study and kitchen. Andersen’s original leather suitcase, on loan from the Copenhagen Airport, was specially flown in to commemorate the Shanghai opening.

Garde Due has focused on broadening the brand’s home product offerings and increasing its global appeal since he became ceo in 2007. He declined to give sales forecasts, but said the key performance indicators of the new lifestyle stores are double the old store concepts.

The jewelry, watches and hollowware on offer in the new flagship are similar to other Georg Jensen outlets around the world, though the brand will focus more on gold and diamonds in China.

“The consumer in China is at a very interesting point. They have a very sophisticated approach to craftsmanship and an understanding of quality. At the same time, it’s an emerging market and part of the Chinese consumer has a wish [to show off],” said Garde Due.

The company’s outlet in Shanghai’s Peninsula Hotel is doing “well above expectation” since it opened in March, according to Garde Due. There are four Georg Jensen shops in Hong Kong.

Georg Jensen is preparing to open five stores in China by the end of this year and 10 more in the next three years. It also will launch a revamped e-commerce site worldwide in the fall.