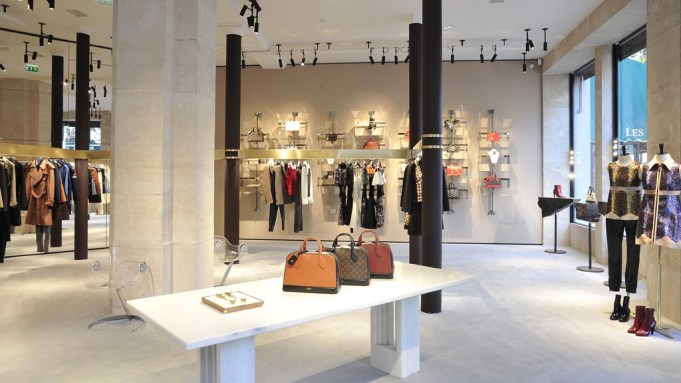 Attached to Vuitton’s boutique in Saint-Germain-des-Prés, the temporary shop opened this week in a space previously occupied by the landmark La Hune bookstore, now appointed with Seventies furnishings and fixtures. Accessories resting on chunks of marble that bobble when touched.

While less futuristic than his previous retail concepts, the corner unit features signature Ghesquière touches, including small, tubular spotlights crowded on the ceiling.

“I’m so happy I was able to develop a first pop-up store for the Louis Vuitton house in such an iconic location in Paris,” Ghesquière said. “It’s always very stimulating to follow my vision through to the design of the retail space.”

The vintage shelves and seating, including circa 1971 Perspex chairs by Boris Tabacoff and a 1969 hulking white marble table by Carlo Scarpa, serve as the backdrop for Ghesquière’s retro-tinged fashions, such as dresses and skirts cut in crisp A-lines, some detailed with big contrasting pockets or bold zippers.

It marks the debut of ready-to-wear at the Left Bank location.

To heighten the chic Parisian mood, the French designer employed pale pillars and chalky walls that echo the stone facade, restored to its Haussmannian-era glory.

The raw marble sculptures, resting on thin steel posts and titled “Dancing Stones,” are by Belgian artist Gerard Kuijpers and stationed in the tall windows in full view of the crowds whisking between the Café de Flore and a newsstand.