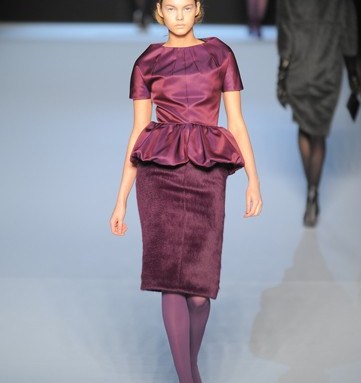 “I feel very much at ease in Paris, so Florence was a challenge,” said Rome native Valli during pre-show fittings. “I liked the idea of going back to Italy’s fashion roots because I was always fascinated by the Sala Bianca,” he continued, referring to Italy’s first location in the Sixties for runway shows in Palazzo Pitti, “and by the mystery and allure of Italian actresses from the past, such as Monica Vitti.” Valli was invited by Pitti Immagine, which organizes a women’s wear showcase focused on pre-collections. (It also invited Diane von Furstenberg to Florence for her 2009 resort show.) Guests included Luchino Visconti di Modrone, Delfina Delettrez Fendi, Margherita Missoni, Wanda Ferragamo, Donatella Girombelli and Laudomia Pucci.

Valli infused Florentine tradition into the clothes with Fifties-style looks in fine wools and cashmeres. The mostly black palette had dashes of ecclesiastical purple, tangerine and bronzed green. Outerwear was slim with slightly rounded shapes in back and often featured cropped trumpet sleeves, while shearling coats had a dégradé effect. Cocktail dresses, meanwhile, were slender and shapely with distinctive embellishments.

As for the future, Valli says he is focused on growing his company one step at the time, noting that he’s self-financed and self-managed, and that he hopes to open a flagship at some point. His line is carried in 220 doors in 35 countries. “I think this crisis will open a new era for everyone because it will reward those companies focused on quality [and] that didn’t dilute their brands,” said Valli.

See all the looks from Giambattista Valli’s pre-fall collection >>