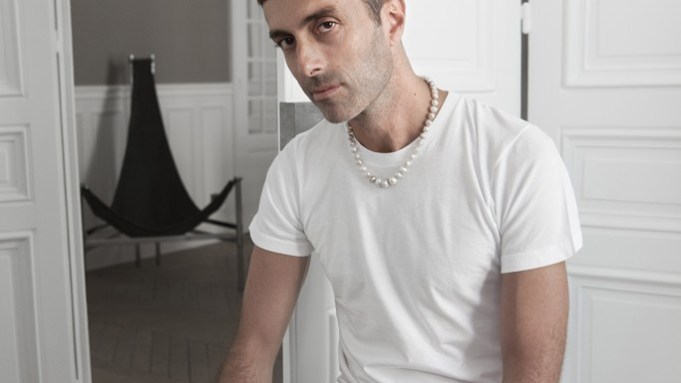 MILAN — Giamba is coming to Milan.

Almost 10 years since the launch of his signature brand, Giambattista Valli will introduce a new ready-to-wear line called Giamba in September with a runway show here. “All my friends call me Giamba, and the moniker reflects the spirit of this new project. It’s another side of the same coin, another collection that runs in parallel with the designer brand, one completing the other,” Valli told WWD. “There is also a playful, underground and sexy side in me and in my designs that you will see in the Giamba line. I’ve been thinking about it for a while and waited for the right time, and now it’s matured. I am really very happy.”

Valli defined his signature line as “more intellectual” and his couture line, launched in 2011, “more oneiric.”

The designer underscored that the collection responds to his own personal desire to express different sides of his personality. At the same time, he believes the line will target the same customers, the “Valli Girls,” who “have evolved, sometimes married and had children,” and who need different looks for different moments of their lives, as well as new customers. “Valli Girls” include Lauren Santo Domingo, Bianca Brandolini d’Adda, Charlotte Casiraghi, Alice Dellal and Diane Kruger, among others.

“I feel the need to dress women in general, and Giamba is a little more intimate,” he said.

The designer provided a list of adjectives to define the new line and its customer, from “powerful, active and on fire” to “fearless, tomboy, own-minded, nomad, fresh and fab,” differentiating it from the signature line, marked by adjectives including “free-soul, courageous, aristocratic, effortless and unique.”

Valli is the sole owner of Giambattista Valli Paris and his collections include fur and accessories lines. To better control production and development of the Giambattista Valli and Giamba collections, the designer has set up GBO, a company created by himself and entrepreneur Mario Bandiera, dedicated to the worldwide development of the fashion house’s rtw collections. GBO will be supported by BVM SpA, founded by Bandiera and the parent company of Les Copains, and which will handle production of the Giamba collection.

“I adore Bandiera,” said Valli, who will design two seasonal collections in addition to two pre-collections yearly. Giamba will target a maximum of 500 selected worldwide points of sale. “I want distribution to be highly controlled,” he explained. Monobrand stores are not yet in the cards.

Speaking of his choice to show Giamba here, Valli defined the city as “very interesting,” noting that mainly big designer brands are on its runways, as labels that could be “equivalent” to the new label show in New York or Paris. “France has given me a lot, but so has Italy and a part of me is returning to the country.” Valli shows both his couture and rtw collections in Paris.

His first namesake store here was officially inaugurated in February, nestled in the courtyard of a historic building on the city’s tony Via Sant’Andrea, between Via Montenapoleone and Via Spiga.

The designer was born and raised in Rome, studied at Central Saint Martins in London, and after stints at Roberto Capucci, Fendi and Krizia, moved to Paris in 1997, where he worked with Emanuel Ungaro. Valli opened his first store in Paris in December 2010, followed by an accessories boutique there last September.

“Having fun is key to success,” he concluded.