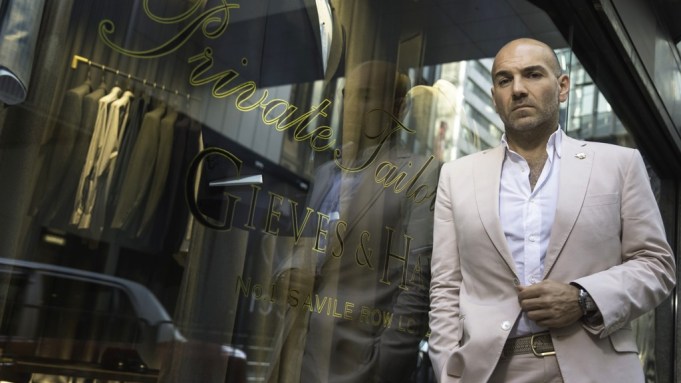 Located on Ice House Street, the 1,351-square-foot space is the fifth point of sale in the city, but the brand’s first street location.

“It’s our first street-level store in Asia, which is huge,” said creative director Jason Basmajian, who was in town to fete the new store. “Although it’s a small store, it’s symbolic. It’s a prototype of our new look as we go forward.”

With walls covered in gray flannel and handcrafted bronze fittings, the store has a minimalist look. “We envisioned it as a beautiful dressing room where you have your shoes and clothes lined up and your sweaters stacked up,” he said. “It’s a warm, inviting atmosphere. It feels like a men’s club.”

The Savile Row tailor, founded in 1771, is known for dressing British royalty including Prince William, who wore a navy Gieves & Hawkes suit for his engagement portrait with Catherine Middleton. Other high-profile clients have included Michael Jackson, Sean Connery and David Beckham.

The Ice House Street store focuses on bespoke, private tailoring and the brand’s new “Handmade in Britain” capsule collection. Also available in the Savile Row flagship, the limited-edition collection features sharply tailored suits, separates and the brand’s first line of footwear. It is only available in these two locations. Next season, Basmajian plans to introduce a full collection with knitwear, outerwear and accessories.

“The new capsule collection is very indicative of the direction we are taking with the brand,” said Basmajian. The goal was to “make something in the spirit of bespoke with the same level of detail, craftsmanship and quality but that’s ready-to-wear,” he explained. The 14 looks include hand-cut dress shirts, velvet dinner jackets, cashmere overcoats and hand-burnished calfskin shoes.

“There is a huge desire for luxury products here, so we’ve upped the game when it comes to even more special fabrics with finer wools and cashmeres,” he said. “Products like that work very well for this market.”

With more than 90 outlets in Mainland China compared with only 10 in the U.K. and Ireland, the British label is no stranger to the region.

Part of its success can be attributed to Chinese consumers’ fascination with royalty. “Obviously, there is a genuine association with the royal family,” he said. “The idea of heritage and dynasty speaks culturally to the Chinese audience. They can understand that it’s about quality and longevity.”

In particular, Gieves & Hawkes’ personal tailoring service has become increasingly popular in the region and will be a major focus of the Ice House Street store and future units.

“We will be expanding through all of Asia in the next couple of years. Singapore is next on the map,” said Basmajian, who has a meeting on Friday about a new store in Macau. There are also plans to build more flagships in both first- and second-tier Chinese cities and enter the U.S. market.

Commenting on the rapid growth of the global men’s wear market in comparison with women’s wear, Basmajian said, “It’s actually being led by China because the men here have a lot of money to spend and they are really paying attention to what’s happening with clothes. There’s definitely an interest.”