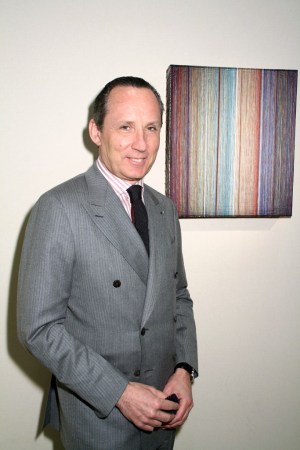 NEW YORK — Gildo Zegna is a firm believer in the synergies between fashion and art.

“The link between fashion and art, especially contemporary art, is incredible,” said the chief executive officer of the Ermenegildo Zegna Group. “The customer today is much more interested in the visual part of art, and it can have a strong effect on the inspiration of a fashion brand.”

Zegna was in Manhattan to host a “multisensory experience” at the company’s flagship Wednesday night, celebrating the history and varied uses of silk yarn. As part of the exhibition, the Italian luxury brand commissioned American artist Emil Lukas to create five original thread paintings using Zegna silk yarn. The pieces were created under the auspices of the company’s ZegnArt project, which collaborates with artists, curators and cultural institutions to promote visual arts.

“We met Emil when we were walking Art Basel and fell in love with his idea of art,” Zegna said. “Instead of paint, he uses yarns in hundreds of different colors. It’s minimalistic but inspirational.”

For the pieces created for Zegna, Lukas visited Lanificio Ermenegildo Zegna, the company’s textile mill in Trivero, Italy, and selected 52 colors of yarn to use in the artwork.

This focus on silk, which includes an installation of raw materials and a video detailing the journey the fiber takes from its origins in China to the factory in Europe, is designed to highlight the company’s summer men’s collection. In late 2009, Zegna acquired the Tessitura di Novara silk mill, which has become a subsidiary of Lanificio Ermenegildo Zegna.

“It’s fascinating to add a new dimension to summer clothing for men,” Zegna said. “We want to make silk the cashmere of summer.”

The summer collection incorporates silk and silk blends in a variety of categories, including suits, shirts, sweaters, jackets, ties and outerwear. Among the pieces are seersucker blazers, wrinkled shirts and pants, raincoats and scarves.

“This is a new way to support the brand and keep giving it a new dimension,” Zegna said. “We’re always looking for something new, and we’re more demanding and interested in innovation. But at the end, the formula is simple, it’s the execution that’s the hard part.”

Zegna singled out the company’s profitability of 10 percent and earnings before interest, taxes, depreciation and amortization of 21 percent as “key numbers,” and said he is expecting “another decent year this year. We have an ambitious plan, but we continue to strive for innovation within the quality world of Zegna. We came out of the crisis in ’08 and ’09 by staying the course and investing in quality until we saw the light — and that light came quickly.”

He said the company’s growth in Asia was the catalyst for driving that recovery. Asia already accounts for 50 percent of exports.

“We look at the world in a very global way,” he said. Zegna was among the first companies to enter the Chinese market, and he said the next frontiers include Africa, which is “waking up” to fashion. Zegna will open stores this year in Nigeria and Morocco as well as Angola, a move that he said is proof of the company’s “pioneering spirit.” Also on the list is Vietnam, with stores in Hanoi and Saigon, as well as Malaysia and Indonesia.

He admitted that India, where Zegna has six stores, “is slower than we expected, but we have a solid presence there” and he expects the business to eventually come around.