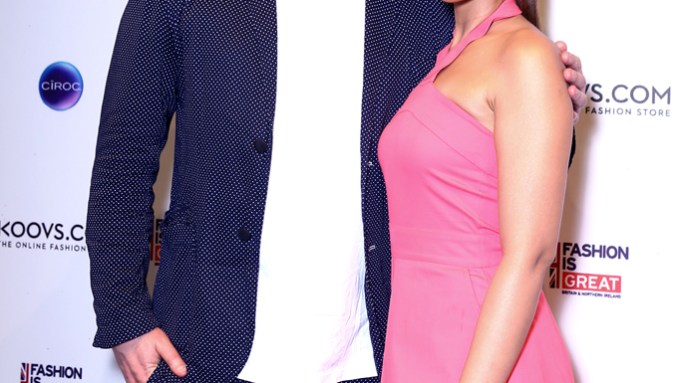 NEW DELHI — It is easy to spot Giles Deacon from a distance in his startling pink T-shirt and green shorts, on a hot spring morning.

Despite the heat, the U.K.-based designer gave up the air-conditioned interior of his hotel to sit on a sofa in the hotel garden and speak glowingly of his first collection made for India. “I hate to use the word quirky all the time — but it has chic elegance and then it has a kind of Giles quirk to it — or a twist, which gives it a sense of the unexpected, or a play of volume or color or the kind of fabrication design that has a print or a jacquard, the kind of things we have always worked on that have a signature appeal,” he told WWD.

“It kind of fits into the two sides of my personality where I have a love of melancholic and ethereal and beautiful — it doesn’t have to be particularly dark — and the very much more playful side – where you can have not fun and certainly not irony, but a sort of pop twist to things which I like, too.”

The ready-to-wear collection for India, with colors, prints, casual cottons, informal crepes and stylish evening dresses in Deacon style, was worked to fit the market’s needs along with those of the team from Koovs, the e-commerce site with which Deacon launched in India.

The launch party at the British High Commission was a step further into the fast changing fashion world in India with a high-society guest list, silver-boxed seats, and Bollywood actress Ileana D’Cruz walking the runway for the launch.

Deacon knows the value of celebrity. His clientele has included Kate Moss, Angelina Jolie and Gwyneth Paltrow, and in India, actress Deepika Padukone recently wore one of his dresses.

Although Deacon lives in London, has his studio there, and “of course I love London,” he said, “but I hate the way people can have that London centered-ness and the snobbery that is going on in the world.”

Travel has long been an inspiration, from childhood holidays in Botswana to reading books by Rudyard Kipling.

His visit to India — with which he already has a connection with private clients as well as a source of textiles and embroidery — is growing stronger. “There are a hundred photographs and ideas I would like to examine when I get back,” he said. His trip helped him to get ahead of the India Festival at the Victoria & Albert Museum in London in September as well.

Deacon described Indian designer Sabyasachi Mukherji’s store in Mumbai as “the most beautiful store I’ve ever been to in my life — I thought his collection is really incredible,” he said.

Deacon is readying for the launch of his own e-commerce site – a soft launch this summer and a more formal one in the fall. This would mean more frequent offerings, some one-offs for the Web site, a little bit more of offerings for the home.

He also continues to be described as “playful.” Does he mind?

“I think it depends on the intelligence of the person saying it, and what they feel is playful,” Deacon said. “I mean, it’s clear in my book that I’m not designing comic clothes. But if playful is like a Dali-esque or a Schiaparelli world, I would be very happy to fit into that category. Playful can be many things — it could be very simple as well, with embroidery on a very chic dress. Playfulness with sophistication is what I like to make,” he said.