Deacon heads to Paris Haute Couture as part of strategic shift in business. 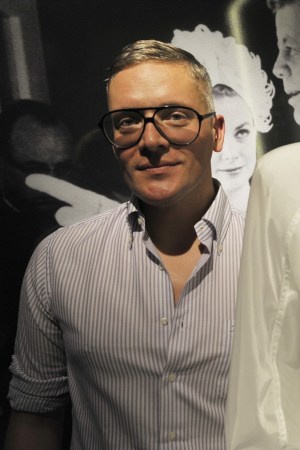 LONDON — Giles Deacon is leaving London Fashion Week and ready-to-wear behind and joining the Paris couture schedule in July, WWD has learned.

The move is part of a strategic shift that will see Deacon, who has been showing his collections during London Fashion Week since February 2004, focus on bespoke, one-off and red carpet creations.

Deacon also wants closer contact with his private clients, shorter delivery cycles and collections that are more aligned with the actual seasons.

He will not take part in London Fashion Week in February, and will instead show his fall Giles Deacon Couture collection in July in cooperation with the Chambre Syndicale de la Haute Couture.

“We want to focus on what we do well, and maximize the success of the red carpet and private client work we’ve been doing over the past four years,” said Deacon in an exclusive interview. “We want to be the go-to business for super-special daywear and eveningwear, to focus on what we are known for, and what our customers want from us.”

Deacon is the latest London designer to rethink his creative and business priorities, and question the logic of the traditional seasonal ready-to-wear cycle. He also wants to accommodate his customer, who increasingly wants to buy a look as soon as she sees it, rather than wait six months until it lands on the store floor.

Last month, the emerging London talent Thomas Tait revealed he was quitting the London runway and opting instead for one-on-one appointments in Paris with press and buyers in order to build his namesake business on his own terms.

In recent seasons other London names including Marios Schwab and Matthew Williamson have quit the schedule and opted to work in a different way, with one-on-one showroom appointments and in-season deliveries.

Deacon said the couture schedule came as something of a relief: “With couture, it means I get to show fall in July, with delivery in September. My clients will be getting their pieces in season.”

Couture represents a natural step for the designer: His rtw shows have always had a spectacular element, set in dramatic locations such as The Stationers’ Hall and the Royal Courts of Justice. They have often featured wild masks and creations by milliner Stephen Jones — Jones and Deacon created a life-size feather yeti one season and sent it down the runway — and detailed handwork and period twists for eveningwear.

Last month, he dressed the actress Gwendoline Christie for the London premiere of “Star Wars: Episode VII The Force Awakens.” Christie, who is also Deacon’s partner, wore a black dress with a duchess satin bodice embroidered with Swarovski crystals and stripped ostrich feathers at the front.

Deacon said he’s fascinated by the idea of making his label “a couture brand for the 20th century, using craftsmanship, workmanship — and technology.”

Going forward, he plans to interface with customers on-screen, so if someone happens to be on holiday, sailing on their yacht they can still browse his latest designs and see how they fit.

“I have their measurements, so I can try out new styles on their avatars, and they can place an order from whatever device they’re on,” said Deacon. “Today, it’s all about going to the customer, rather than waiting for footfall in a shop.”

Like so many designers today, Deacon is also engaging with his customers on Instagram and lifting the veil on the whole design process. “They love all the backstory, they like seeing the toiles and looking at the embroidery details,” he said.

He added he’s looking forward to future developments in technology, where his customers will be able to sit front-row at fashion shows, wearing virtual reality glasses.

In addition to the twice-yearly couture shows, Deacon plans to work with wholesale clients on trunk shows. Later this year, he plans to hold trunk shows in Asia, the Middle East, California and Riyadh, Saudi Arabia.

Deacon said that over the past four years he’s been making about 60 to 90 bespoke and couture pieces a season. He plans to scale that up to 200 to 250 under the new structure.

“This business gives you a lot more control, because it means everything that’s ordered is sold, and each customer gets an individual piece. We’re able to discuss specifics, like the length of a sleeve or the use of a certain fabric.”

He plans to manufacture the majority of the collection in the U.K. and in Paris, where he has taken on new ateliers. He also plans to add about five new people to his London studio over the next six to eight months. Deacon also plans to open a showroom in Mayfair, although he will continue to work in his studio on Brick Lane in London’s East End.

His business has always been independent. Over the years, he’s worked on various outside collections, including Ungaro, where he served as creative director from 2010 to 2011; Fay; Daks, and New Look. Most recently, he’s done a collection for the British department store Debenhams.

As part of the reorganization, Deacon said he plans to take on outside investment for the first time, adding the investor will be a strategic one and a deal should be done by the middle of this year. He declined to reveal the names of any potential investors.

A graduate of Central Saint Martins, Deacon spent the early part of his career designing at Gucci and Bottega Veneta. In November 2004, the same year he launched his Giles rtw collection, he was awarded best new designer at the British Fashion Awards, and two years later he scooped designer of the year at the ceremony.

In 2009, he won the ANDAM award in Paris and showcased his spring 2010 collection during Paris Fashion Week. He was also a special guest at the Pitti W event in Florence in 2010, where he showed his pre-fall 2010 collection.