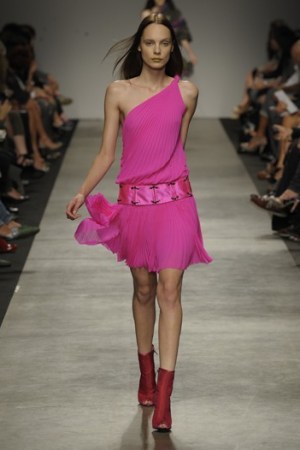 This story first appeared in the October 15, 2009 issue of WWD. Subscribe Today.

The Sicily-born Trumbatore, 42, began his career working with Alessandro Dell’Acqua, followed by design posts at Prada and Dolce & Gabbana.

Gilmar chief executive officer Paolo Gerani, who was previously in charge of design for the brand, will continue to supervise that element, but said “it was time to delegate more” in order to achieve a “more independent creativity” for Iceberg. Giambattista Valli was design consultant for the brand until the spring collection.

“That was the first step,” said Gerani, who will be in Moscow today for the opening with retailer Bosco di Ciliegi of the brand’s second store in the city, located at the luxury Petrovsky Passage shopping arcade. “I have gradually distanced myself from the creative aspect of the business to focus on company strategies, in addition to our daily operations.”

Gerani said Trumbatore will help develop the brand into a lifestyle label, while “respecting its roots.” Trumbatore will eventually design the company’s other line, Ice Iceberg, as well.

In 2009, Iceberg is expected to have sales of 80 million euros, or $118.4 million at current exchange. Gilmar, which also produces the Frankie Morello brand and produced Valli’s collections for five years until the spring season, will end the year with revenues of 110 million euros, or $162.8 million.

Founded in 1974 by Giuliana Marchini Gerani, Iceberg is considered one of Italy’s first luxury sportswear brands with a penchant for knitwear.