The designer is revving things up in the Chinese capital for Thursday's fashion extravaganza, "One Night in Beijing." 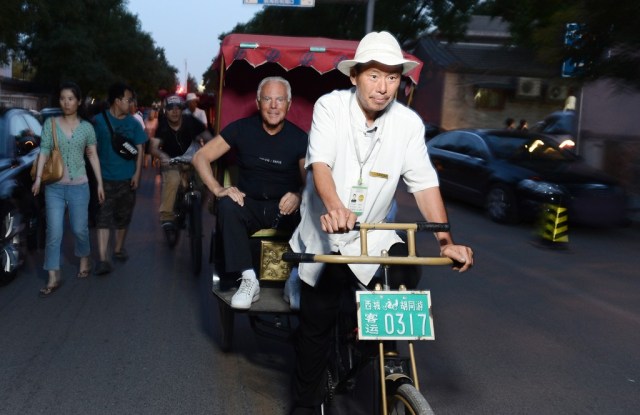 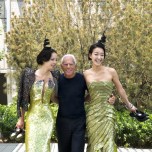 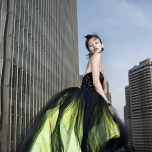 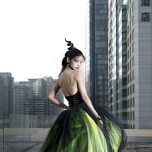 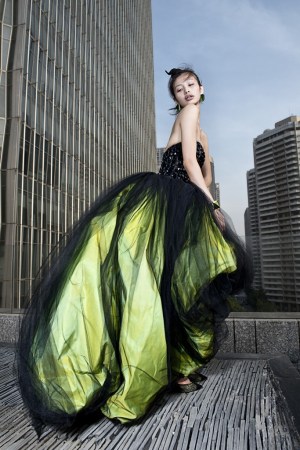 A look from Armani Privé.

BEIJING — Almost four decades after he set out to build his fashion empire, Giorgio Armani is still dotting his i’s and crossing his t’s — and even more so in a fast-growing country like China.

“I feel it’s the right time to take stock of the situation and carefully clarify what my style is all about,” said the designer in an exclusive interview during a fitting in advance of a grand fashion show and party to be held here today.

The special event, called “One Night Only in Beijing,” marks more than a decade of Armani in China, and is to be staged for about 1,000 guests at the New Tank in the 798 Art District, which is hosting a fashion show for the first time.

On the catwalk, the designer will present a newly edited version of the fall men’s and women’s Emporio and Giorgio Armani collections and the spring Privé couture line, revisited with an additional 15 looks created as a tribute to China, including a spectacular black lacquered gown embellished with a sequined dragon along its length.

“No, no, let’s not add anything to tulle — it’s too heavy otherwise,” Armani said to one of his assistants in his rapid-fire way during the fitting a few days before the show, at the same time carefully scrutinizing one of the 200 models cast for the event who was sliding around the locale at the China World Summit Wing luxury hotel, which was brimming with carefully catalogued looks and countless attendants flown in for the occasion.

“Lovely, isn’t it? But what’s that landed on her head?” he asked in jest, referring to a twirly headpiece on another model. “Off, off,” he said, pointing to the offending item.

Fully engrossed as he is in the editing, Armani, energetic and entirely unfazed by any time-zone difference, seamlessly shifted between his designer and chairman hats, providing insight on his average Chinese consumer and his shopping habits, as well as strategies on how to expand his already considerable business in China. Ever the practical entrepreneur, that is one of the main purposes of the high-profile event here.

“After all, we want to sell more. All this is not just to add costs on costs,” Armani remarked. The designer revisited the clothes for the show “to make them more wearable, more connected to the real world” here, noting that Chinese customers don’t see fashion as “striking,” or made to impress.

That said, he has no intention of adapting his designs depending on the end customer and the country she is from. “No, those who approach the Armani world love Armani and appreciate the genre,” he said.

The designer conceded that he’s often been inspired by Asia in the past. “In each of my collections, there’s always a part that goes back to a world that does not belong to us, that has made us dream, and I’ve always looked more towards east rather than north,” he said.

Referring to the timing, he said the event “was in the air,” that it was the right moment “to dispel any confusion about my different brands and explain the philosophy of Armani.” Joking in an aside, he added, “It’s always peculiar when I speak of myself in the third person.”

Armani’s last trip to Beijing was six years ago, a time frame equivalent to decades in the ever- and fast-changing landscape that is China. The country contributes significantly to the designer group’s bottom line; last year, Armani’s sales in China jumped 45 percent, which he attributed to “the sophisticated linearity” of his style, “the idea of a nonostentatious elegance that speaks in a direct and clear way to the sensibility of the Chinese public.”

Armani said his clothes are not “costumes,” and allow his customers “to feel like themselves and well in their skin. I believe these are the reasons for my success in China, as elsewhere in the world.”

The designer opened his first signature boutique in China, in Beijing, in 1998 and has been building a network of stores that currently total 289 group stores in 52 cities in Greater China, in addition to an online store for Emporio Armani operated by Yoox. “Our presence in China is significant, and when I opened the first banner here, while foreseeing the potential of this market, I would certainly never have imaged such a strong and fast growth,” said the designer, who, living up to the legendary tales of his hands-on approach, spent the first few days in the city visiting his local stores.

“What we have done has a good impact, and my style is reflected by a good image,” said Armani. “At times, we’ve even created havoc for competitors,” he said with pride, noting that the city’s Sanlitun district has been basically taken over by his three-story Emporio unit.

He further hinted at the group’s power by noticing how rents in Shanghai on the Bund have skyrocketed since the opening of his megastore in that city, although he regretted that the area has since “changed destination,” pointing to the risks connected to entering areas that are still to be developed. A megastore could also “work” for Beijing, said the designer, given the right venue. “Competition is alive, ferocious and active, and we must be present with locations that are relevant, with strong means that show power,” said Armani, who has implemented an expansion strategy geared at penetrating China’s second- and third-tier cities.

“I am surprised by the coexisting of tradition and modernity, which I find inspiring. China is a real monument to the will to do. I find that the variety and differences, in such a big country, should be values to be preserved. Beijing appears to me to express well the strength and energy of change of contemporary China, but also the connection with tradition: For this reason I chose it for this event,” he said.

While conceding that growth and changes in China are “stupefying, radical and fast,” the designer believes in further guiding customers in terms of fashion appreciation. “With our superrich clientele, we see excellent results, but there is also a group of Chinese customers who still need to be educated. We sell a lot of accessories, but clothes at a certain level are reserved to a public that is very elevated, as many are still happy to wear T-shirts without differentiating between day and night,” the designer said.

As important as China is to the global luxury goods sector, Armani realizes he can’t focus solely on that market to the exclusion of others. “I believe it is important to invest in China exactly as it is in other markets. I aim at a balanced expansion,” said Armani, aware of the “physiological phases” in the industry.

He admitted to worries about the “delicate moment” in Italy and globally, despite the “solid position” in the market of the group, which closed last year with sales of 1.8 billion euros, or $2.5 billion at average exchange, up 13.6 percent from the previous year.

“I am confident in the actions put in motion by the Italian government, and even more I have faith in the Italians and their ability to act and reinvent themselves. By nature, however, I prefer action: You run the risk of remaining immobile if you analyze things too much,” he said.

Which is perhaps why, asked again about the future of his company, the designer showed a hint of irritation. “Am I sick of this question? Yes,” he said.

Asked about recent speculation that he might be contemplating forming a foundation that would control the company, he responded: “The foundation is only one of the possibilities; there is nothing substantial there. The continuity of the company is already well defined. I’ve had close collaborators for some time now that bring forward my work in the best of ways. The family, in addition, is integrated in the management of the company. I would say that the Armani Group is in excellent hands.”

He also remains disinclined to list his company, seek a partner or sell to an investment fund, for “one very simple reason: absolute independence. It is the element on which I have built my business and the last that I am willing to give up.”