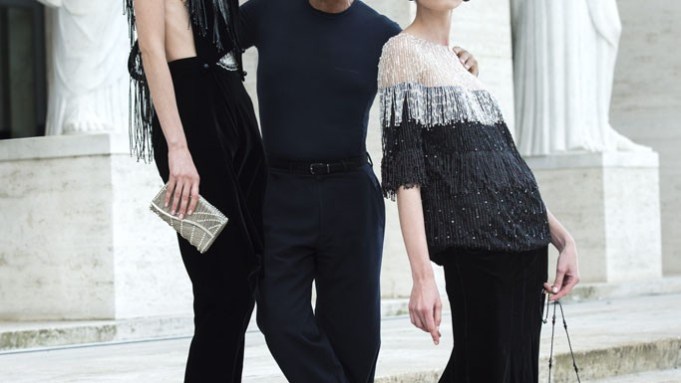 ROME — Giorgio Armani’s “One Night Only” here tonight is meant to be a celebration of Italy.

“I strongly believe in being Italian, which does not mean blind localism but support for the value and characteristics of our country,” Armani told WWD during a fitting a day ahead of the bash. “This is the main reason for organizing this event. A significant and important happening, perhaps against the trend: We entrepreneurs must be the first to have faith in the potential of the country.”

Wanting to celebrate the idea of taking pride in being Italian, the designer said it was “natural” for him to choose the Palazzo della Civiltà Italiana (the Palace of Italian Civilization, which is also known as Square Colosseum and was unveiled in 1940) with its “sensational architecture” that is seen as “the maximum expression of Italian rationalism.” He praised the “clean and rhythmic lines” of the monumental travertine building, which has six symmetric rows of nine arches and more than 30 Carrara marble statues peppering the square base of the parallel-piped edifice. “I find it transmits calm and vigor,” said Armani.

The designer tonight will stage a runway show, presenting a revised version of the Giorgio Armani and Emporio Armani fall collections for men and women and of Giorgio Armani Privé for spring, and an expanded Eccentrico exhibition, first unveiled in Milan in September. The show will be followed by a cocktail dinner and after party. “One Night Only Roma,” which follows previous such events in London, Tokyo and, most recently, in Beijing last year, is expected to draw guests including Tina Turner, Sophia Loren, Bérénice Bejo, film director Giuseppe Tornatore, Paolo Sorrentino and Ennio Morricone.

Armani, looking fit and upbeat and sporting a Saint-Tropez tan, said he’s adapted the clothes to be shown on the U-shaped runway for a public of customers and friends. “It’s very different from showing to the press and retailers, when you tend to exaggerate — even I stray from my rigorousness and show an excessive number of hats or play with the length of a skirt. But with clients, you want to keep in mind that not everyone has the perfect leg, so perhaps a higher heel will help a specific look, for example.

“Anyway, I feel that more than 90 percent of clothes on a runway should eventually be in the stores,” said the designer, nodding his approval to a model posing for him.

The event is also timed to celebrate the reopening of the refurbished Giorgio Armani boutique in Via Condotti that first opened in 1992. “One Night Only Roma” comes at a time when Italy continues to face unemployment and a lackluster economy, which is being lifted mainly by exports and the flow of tourists shopping in the country’s major cities and resort towns. “The political and economic situation in Italy is not rosy at the moment,” conceded Armani. “By nature I tend to be optimistic, based on a clearheaded realism. For this reason, I think that to invest in the country is still important, not lastly because, everything notwithstanding, the market continues to give us positive signals, which it would be outrageous to ignore.”

Asked if the celebration marking the Via Condotti boutique is also a nod to shoppers coming from abroad, Armani said “only in part. Certainly the tourist flow for luxury brands is very important, but I must say that the results prove that local spending is holding up.”

The designer, who is also chairman of the company he founded almost four decades ago, did not register a slowdown last year, posting a 20 percent gain in operating profit, which reached 339 million euros, or $434 million at average exchange, on sales of 2.09 billion euros, or $2.68 billion, up 16 percent compared with 2011. Europe contributed to the bulk of sales, totaling 1.02 billion euros, or $1.31 billion, an 11 percent increase compared with the previous year. (The company does not break down sales for Italy.) Armani is expecting the positive trend to continue in 2013.

The designer did express concerns over the “generalized loss of faith in the establishment in Italy: an inevitable change that worries me.” Hence, he pointed to the “need of a stable political situation, stimulus operations, and a clearer and more balanced fiscal system. But, especially, an enormous injection of faith from the establishment in a concrete and convincing way. The Italian industrialists, who are tenacious and brave, should be stimulated to invest in young creativity, while Italian creative minds should find a different system that would enhance their talent. After all, what we built at the end of the Seventies has been lasting for two generations.”

Armani said he was pleased with the company’s network of stores in Italy, which comprises six Giorgio Armani and 10 Emporio Armani boutiques, as well as four Armani Jeans and three Armani Junior stores. There is also one unit each for Armani Collezioni, Armani/Casa, Emporio Armani Caffè and Armani/Fiori. “Our plan is to continue with an organic expansion, with openings in line with what we’ve achieved in the past and considering the global and local situations,” said Armani, admitting Rome “could be ideal for a hotel or a concept store.” He declined to elaborate, saying that these are “complex operations that need to be evaluated.”

The Via Condotti boutique covers three floors over almost 10,000 square feet. A silk-screen printed bamboo is the main motif, as well as pale colors, “to let the clothes stand out, so that they are not overwhelmed by the store’s design just to please the architect,” said Armani, who conceived the concept. The unit boasts nine windows and is divided into two separate spaces for women and men, each with an independent entrance.

Standout elements are floors in silk georgette stone; teak tables with black crystal tops and details in bamboo, and transparent shelves that create the illusion accessories are suspended in space. This category is prominently displayed at the entrance, with a separate room for footwear. Women’s ready-to-wear is shown on the first floor, while cocktail and evening gowns are on the level above. This is the only Giorgio Armani boutique in Rome, and the second after Paris in Avenue Montaigne, that has an area dedicated to accessories of the Privé collection, which are custom made. In the men’s wear section, the designer’s made-to-measure has a dedicated room.

“I am Italian. My brand expresses a taste and lifestyle with unmistakable roots,” said Armani, noting that customers have changed over the years, as they are not seeking total looks, nor do they see clothes as an expression of an economic status. “These are all factors that I keep in mind. It is precisely this constant attention to reality that makes me reactive and proactive. I believe this is one of the reasons of my success also in Italy,” explained Armani.

The designer said the inauguration of the new boutique allowed him to return to Rome, which he “deeply love[s].”

“I like Rome’s vitality and rhythm, so different from that of Milan. I like the light and the coexistence of historical eras,” said Armani.

On a personal note, he reminisced about his vacations in the beach town of Sabaudia, a few miles away from Rome. “Gigi Giuliani, who opened my first stores here, first showed me around Rome. The beauty of this city is that once you are in it, it feels like you’ve always been here — perhaps because of the locations, the spirit of the Romans, their way of seeing the good and bad in life and how they welcome everyone,” said Armani.