The designer will continue to support health operators fighting the coronavirus.

The Giorgio Armani billboard in Milan's Via Broletto

MILAN — With the Italian government’s latest decisions part of the “Relaunch Decree,” stores, bars, restaurants, hairdressers, beach resorts and museums are allowed to open on May 18 and on Sunday, the Armani Group issued its latest initiatives for this new phase as the country eases its coronavirus lockdown.

As reported, the lockdown was first enforced on March 9 and has been gradually eased since May 4, allowing production and construction to restart. As per the new decree, gyms, pools and sports centers will open starting from May 25. From June 3, citizens will be allowed to move between regions and travel outside Italy to those countries that permit it or return to Italy without being obliged to a quarantine. Cinemas, theaters and children’s recreational centers will open from June 15. These guidelines can be changed depending on the curve of the contagion and on the region. For example, Lombardy remains one of the regions to monitor more carefully, accounting for half of the new infections in the country.

Starting May 18, Armani will dedicate his storied mural in Via Broletto to the image of the doctor with wings holding Italy in her arms, which has come to symbolize the fight against turn coronavirus. The designer’s words of encouragement appear next to the drawing by Franco Rivolli: “To restart safely we still need her.”

With the billboard, Armani once again focuses “on the commitment of those who, still in the front line, are taking care of people, calling on Italians not to let their guard down,” stated the group on Sunday. The image will also be published on the company’s social media networks.

As reported, Armani in March took a full-page ad in more than 60 newspapers in Italy, writing a letter to all of the health-care providers strenuously fighting the coronavirus outbreak.

“It is moving to see you engaged in your work with all the difficulties and the great efforts that by now all the world knows. And especially to see you cry,” the designer wrote in the paid letter. “I think that this feeling is connected to my own desire to become a doctor when I was young and I was looking to forge my path.”

Armani was quick to understand the effects of COVID-19 and decided to show his fall 2020 collection behind closed doors in February. Also, he immediately donated 1.25 million euros to a range of Italian hospitals and institutions involved in fighting the coronavirus  in the country.

In Tokyo, the designer has changed the illumination of the Armani Ginza Tower facade decorated with a bamboo motif into blue. In Japan, the color is used to express gratitude to the people working in the medical industry for their work fighting against the coronavirus. 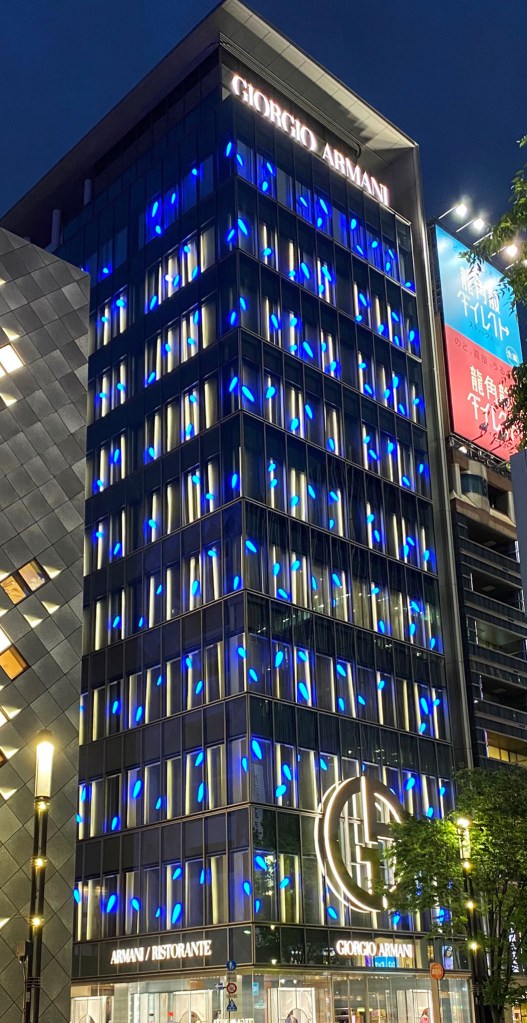 On the occasion of the reopening of the directly owned Giorgio Armani stores around the world, such as in Milan, Paris, Munich, Beijing, Hong Kong and Sydney, in compliance with the procedures established locally, the group said 10 percent of the proceeds from sales of the spring 2020 collection will be donated to charities operating in their respective cities.

Armani will continue to produce disposable medical overalls, transferring them from the owned Italian factories in Trento, Carrè, Matelica and Settimo Torinese, which have restarted manufacturing the group’s fashion collections, to those of sub-suppliers in Italy and other countries, all under the direct responsibility and supervision of G.A. Operations.

The reopening of the directly owned stores in Italy and around the world will be in line with the standards and regulatory provisions of each country, in order to protect the health and safety of the public and its workforce, stated the group. “Application of a strict protocol and duly trained staff will ensure that the shopping experience is personalized and fulfilling.”

To ensure customer service and easier access to the points of sale, Armani launched on Friday the “Book an appointment service” online for his namesake and Emporio Armani stores around the world. By connecting to armani.com, customers will be able to select a date and time at the nearest point of sale. The service will be active for the A|X Armani Exchange stores starting June 3.

In addition, the Emporio Armani Caffè e Ristorante and Nobu Milano will continue to provide customers special menus for delivery, until the upcoming reopening.

Since last Friday, Emporio Armani Caffè e Ristorante has extended the offering with takeaway and home delivery options, including breakfasts and light lunches.

As reported earlier this month, Armani said his namesake and Emporio Armani men’s and women’s shows will be presented in September here. He also said the Armani Privé show will be postponed to January 2021 and will be no longer held in Paris, and that the collection will be seasonless, comprising winter and summer pieces.