Giorgio Armani underscored that the 40th anniversary of his company and the display of around 600 of his signature looks at the venue allow him to show his innovations through the years. 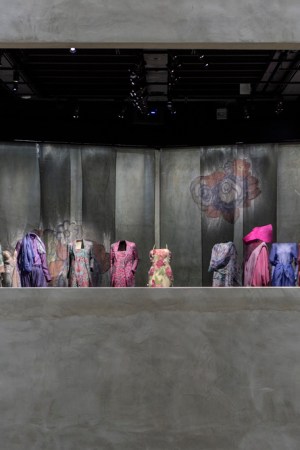 Walking tirelessly up and down the flights of stairs of his new museum and exhibition space, stopping to feel the gauze of a beautifully embroidered archival gown, or buttoning a jacket “that must be seen buttoned,” Armani on Thursday underscored that the 40th anniversary of his company and the display of around 600 of his signature looks at the venue allow him to show his innovations through the years.

But he is looking forward, and not just back. His first future project will be an autobiography, due to be published by Rizzoli in September and to be presented during Milan Fashion Week. “I wanted to share personal thoughts and moments, the ones that I choose to share — there are others nobody will ever pull out of me,” he said. The designer is also mulling the idea of restoring a building complex near Silos with another exhibition area to showcase either looks from his Privé couture collections or from the Emporio Armani line.

Representative of his rapid-fire thinking and undaunted energy, Armani said he doesn’t like to refer to Silos as a museum. “I don’t want this space to be static; [I] plan to renew the displays with pieces from the new collections every six months,” he explained.

The Silos building, constructed in 1950, was originally a granary of the Nestlé company and, after the renovation, covers around 48,600 square feet on four levels. Armani, whose Tadao Ando-designed theater stands on the opposite side of the street, conceived and oversaw the renovation project himself.

The building is modeled after a basilica layout, an open space four floors high with two levels of naves overlooking it on either side. The ceilings are painted black in contrast to the gray cement floors. “I wanted to keep the rough aspect of the Silos as it was,” remarked Armani.

The geometric, regular shapes enhance the sobriety of the stately building. The looks are divided by themes, not chronologically — from ethnic and chromatic to artistic patterns. Around 200 accessories also are on display. Describing the pieces on show, Armani’s attachment to his designs is evident. During the walk-through, he didn’t shy away from revealing that the project struck an emotional chord.

“This job doesn’t allow you to dream much, you must have your feet planted on the ground. I will be 81 in July and dedicated almost all my time to work,” he said.

The designer also lamented a certain homogenization of tastes today, underscoring his never-ending desire to make women look more beautiful. “Now, they put on a pair of leggings and a jacket, and they are good to go.”

A digital archive of sketches, technical drawings and materials from the designer’s collections is available on the top level, as well as a cataloguing system developed specifically for the Silos. A café and a gift shop are on the ground floor. Near the foyer, after the glass facade, there’s a mock red carpet and videos of celebrities donning Armani’s designs.

The opening is under the patronage of the municipality of Milan, and coincides with the unveiling of the international Expo, of which Armani is special ambassador for fashion. The ministry of economic development is celebrating the designer’s anniversary with a special stamp bearing Armani’s sketch of the Silos and produced in a limited run of 800,000 pieces.

The designer is holding a runway show at his theater on Thursday evening, followed by a cocktail event that with the likes of Tom Cruise, Leonardo DiCaprio, Cate Blanchett, Sophia Loren, Tina Turner and Glenn Close.