Ahead of his pre-fall show in Milan, the designer said he wanted to bring attention to his body of work in the accessories segment and presented his jewelry collection, which will be available starting next month.

A look from the Borgonuovo line.

MILAN — Giorgio Armani may have been credited with inventing the greige color, but there’s a new shade associated with the designer: an Armani nuance gold.

As part of his first high jewelry collection under Armani’s namesake brand, the new 18-karat alloy is neither yellow nor pink, but a blend of the two. The unveiling of the line was scheduled on Thursday to coincide with the designer’s first pre-fall runway show in Milan and a new exhibition at the Armani/Silos displaying almost 800 accessories created by him.

“Here you see 40 years of hard work, designed way before there even was a boom of accessories, but all this has often been ignored by the press, focused more on my clothes,” said Armani, who approached the accessories category at the end of the Eighties, in a reverse process to that of many who moved from leather goods to clothing. The designer admitted it was a personal issue, and when he was asked why he was so adamant about playing up the accessories, he responded: “ I want to, I feel the need to do so.”

Armani took the time to walk through the exhibition, called “Accents of Style,” which is not chronological, as the bags and shoes are arranged either by families of color, inspiration, embellishments or themes, such as ethnic or animal prints, two-tone, evening or Neoclassic, underscoring that they were positioned in the luxury category. To be sure, pleated silk designs were shown with the softest calf or reptile totes or models adorned with Swarovski crystals, hand-printed fabrics, or feathers, along with beautiful custom jewelry and his range of ballerinas — he was one of the first designers to pair them with evening gowns — court shoes and slingbacks. One would have been hard put to classify the looks by decade — proof once more of Armani’s consistency of vision and style. That said, he firmly remarked that he likes to “go beyond my limits, I owe it to my customers to push myself and take on new challenges. We must never be prisoners of ourselves.”

He went on to point to a number of designs that he believed had been copied. “But I’m happy to be copied,” he said.

Running until Feb. 2, the exhibition is called “Accents of Style” “because these are items that complete and define a look without being overwhelming,” explained Armani. 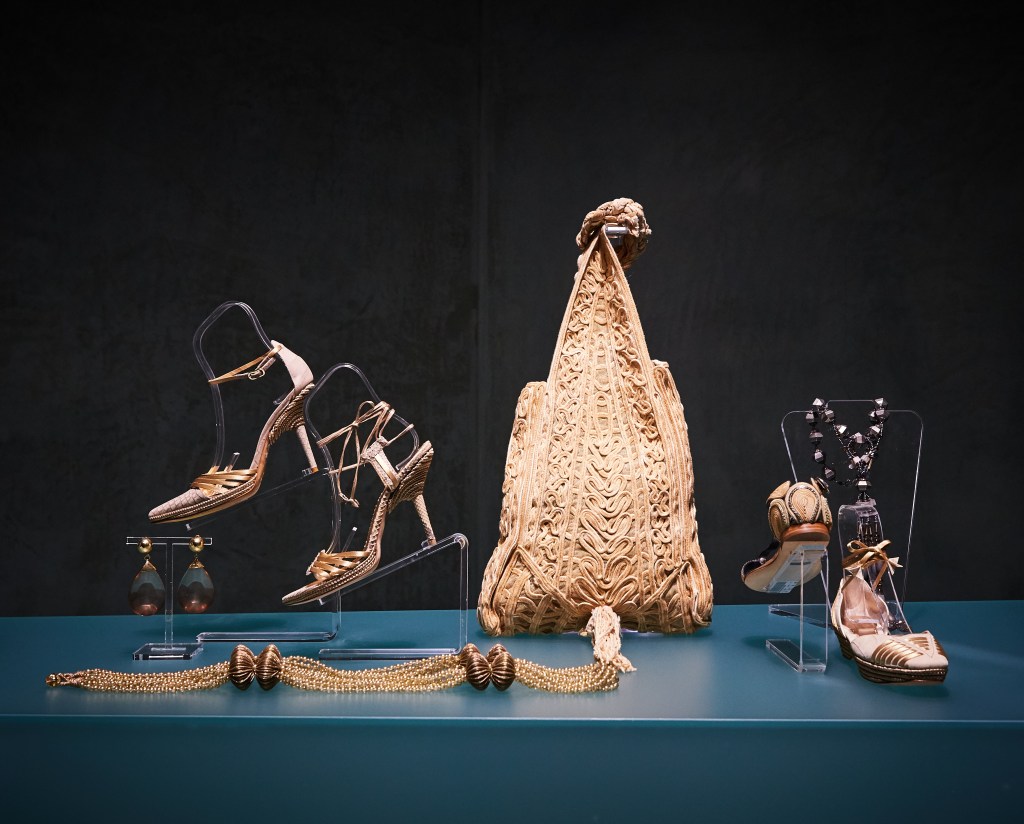 A display of the accessories at the exhibition.  courtesy image

The Silos space, opposite Armani’s theater, was inaugurated in 2015 with a retrospective of the designer’s clothes and has staged several photographic exhibitions dedicated to Larry Fink or Sarah Moon, for example, and, earlier this year, an exhibit of Tadao Ando’s work. “I don’t believe fashion belongs in a museum, the two worlds together are in contrast, clothes must be worn and they risk becoming obsolete in a museum. I prefer a space where you can change things around and always present new projects,” said Armani.

The high jewelry collection, presented at the Armani Hotel, is conceived around three main themes: Borgonuovo, a reference to the designer’s storied headquarters and home address in Milan; Sì, inspired by the cap of the bottle in the “very successful” fragrance franchise, said the designer, and Firmamento, or firmament, because it has “always attracted women — the moon, the stars so far but so close to our hearts. I’ve always been curious — and even a bit scared — of it.” The jewelry was designed to complement the ready-to-wear and responded to a request from his customers, said Armani.

The linear Borgonuovo collection of bracelets, necklaces, earrings, sautoirs and rings plays with variations on the logo, pavé diamonds or topazes, citrines and prasiolites in pastel shades, as well as onyx. 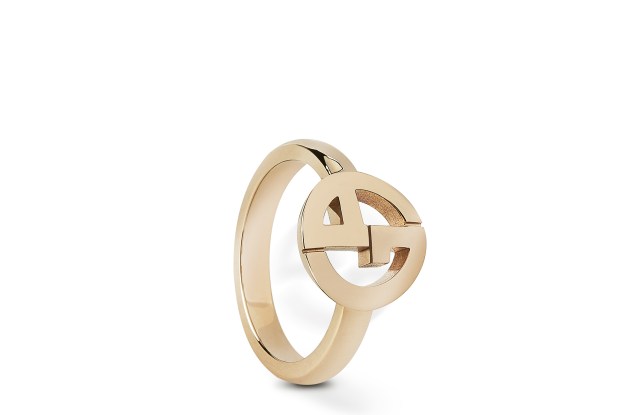 A ring from the Borgonuovo series.  courtesy image

The Sì series re-elaborates the fragrance’s cap — the accent in the word sì, which means yes in Italian — as a petal, creating a collection of necklaces, earrings, cufflinks, brooches and rings in white gold, onyx and diamonds. There is also a sautoir with silk pearls and pendant in onyx and diamonds. 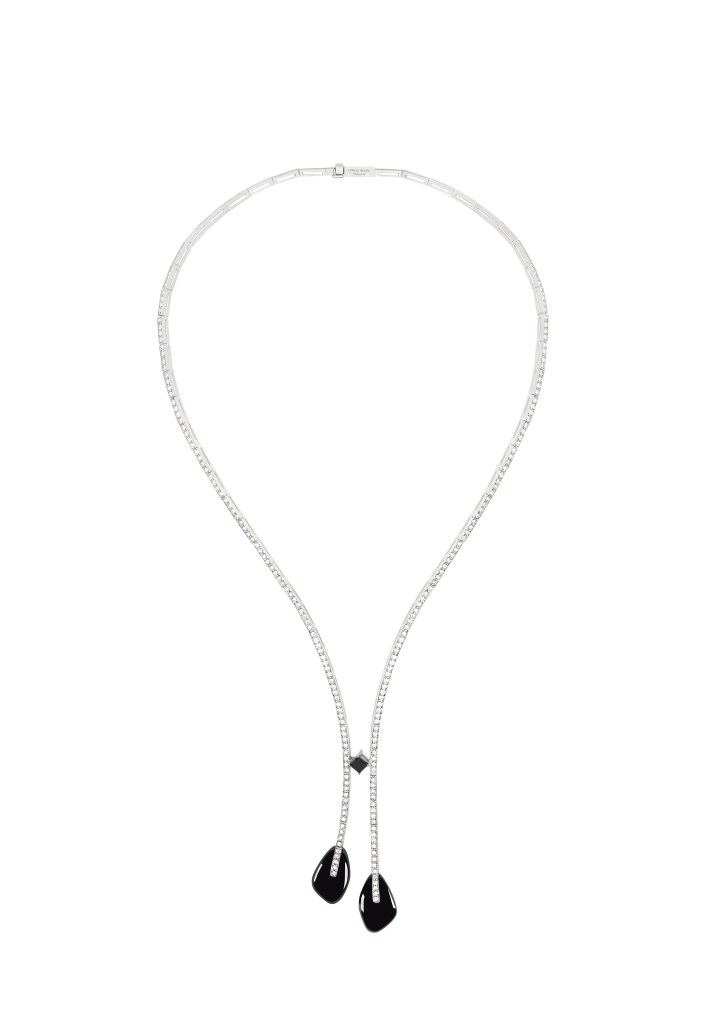 A necklace from the Sì series.  courtesy image 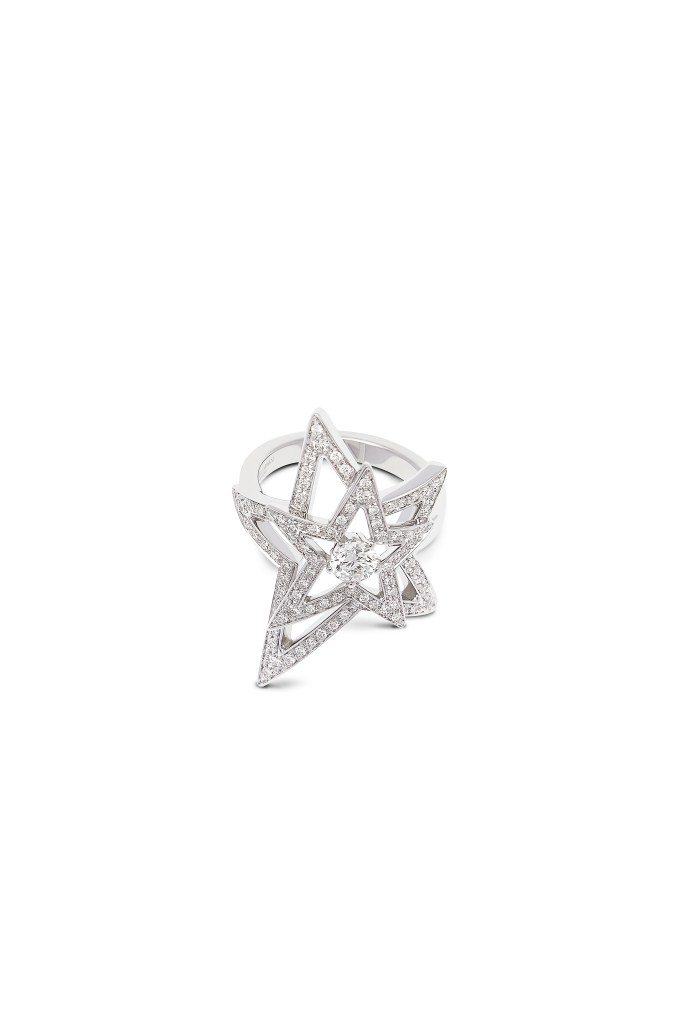 A ring from the Firmamento series.  courtesy image

The Made in Italy line will be available starting next month in selected Giorgio Armani flagships in Rome, Milan, Paris, London, New York, Beverly Hills, Las Vegas, Hong Kong and Tokyo, Frankfurt and Zurich. Prices range from 950 to 20,000 euros. As reported, the designer in March unveiled a Giorgio Armani Privé Haute Jewelry collection .

The events are capping off a year that Armani characterized in the interview as “a good” one, despite the market challenges and the restructuring of his company and the streamlining of his labels set in motion in 2017, focusing on the signature brand, Emporio Armani and Armani Exchange. In particular, he said that Emporio Armani is “gaining market share in the Far East, with beautiful stores. I am finally doing something different from the ideas some people had of Emporio. We are also cleaning up the Armani Exchange distribution and a store is coming to Milan in Via Orefici, but not before September 2020.”

Regarding the production agreement inked with Ferrari this month, Armani said that he will design the “more formal and luxury” products. Asked for the reasoning behind the collaboration, since his brand will not appear on the Ferrari pieces, he said simply: “Coupling with Ferrari, which is a great name and brand, we can both do well.”