Some 700 friends, family, loyal Armani clients, editors and high-caliber celebrities attended the designer's “One Night Only” event at the SuperPier.

By Marc Karimzadeh and Erik Maza on October 25, 2013
View Slideshow 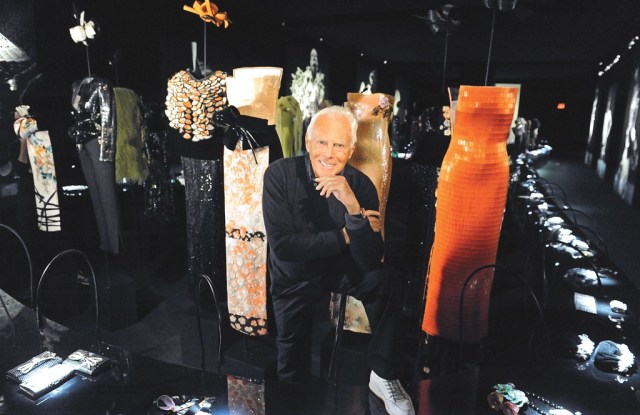 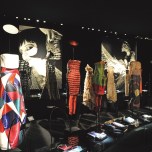 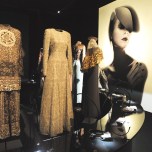 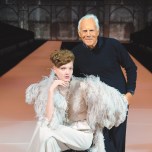 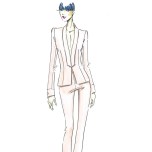 NEW YORK — Short of the Empire State Building being lit in greige, Manhattan on Thursday night was all about Giorgio Armani.

Not only did Mayor Michael Bloomberg dedicate the day to the designer, but Armani staged the latest of his “One Night Only” multifaced events at the SuperPier at Hudson River Park — all with the intent to entertain some 700 friends, family, loyal Armani clients, editors and some high-caliber celebrities.

This story first appeared in the October 25, 2013 issue of WWD. Subscribe Today.

“I’m the perfect Armani woman,” Glenn Close stated matter-of-factly, shortly after stepping off the red carpet. “It’s classic and beautiful and you can still be yourself. You don’t have to worry about all the frou frou and stuff, you know? I’m a yankee, after all.”

Surrounded by the designer’s retrospective exhibition, Close got nostalgic, recalling her first Armani purchase: a blazer bought at the designer’s store on Madison Avenue in the early Eighties. “We’ve developed this huge kind of respect and affection for one another ever since,” she said before Jeremy Irons approached to whisk her off to her seat at the runway show.

Her sentiments were echoed by Ricky Martin, whose 2011 “Livin’ La Vida Loca” tour was costumed by Armani. “Mr. Armani is a good friend. He’s been very generous throughout my career. His clothes look amazing anywhere, on the street or on stage.”

Oscar de la Renta, a “friendly” competitor to Armani, gladly accepted the invitation to the event. “I think it’s great,” he said. “New York is a capital of the world of fashion, and everybody wants to come here. When you come to New York, the one thing we’re not is a local city.”

Armani had a simple explanation for an event of such grand dimension. “Because I am a strong, powerful man,” he told WWD on Wednesday morning, followed by a back-and-forth in Italian with the interpreter to stress that his words come across as “ironic.” There was no risk of being lost in translation here.

The designer was at the company’s Fifth Avenue headquarters amid preparations for the megaevent, which included a showcase of his “Eccentrico” exhibition, a runway show featuring his best Giorgio Armani Privé looks since he started showing haute couture in 2005 (less retrospective and more “a trip down memory lane through the most important moments which will show both continuity and evolution together,” he said), as well as his entire “Nude” fall 2013 Privé show. It was followed by a party (or, as it was billed on the invite, a “Cocktail Dinatoire”).

The superlative outing has a deeper meaning for him.

“I haven’t been present in New York since 2009, the year the Fifth Avenue boutique concept store opened,” Armani said. “However, for me, America is one of the most important markets, even symbolically. The public has been faithful to my idea of style from the start. Since my first store opened in New York in 1989, I’ve always had an enthusiastic following. A big show presenting my haute couture collections to the American public and an exhibition revealing the perhaps unknown side of my work is my way of saying thanks.”

America, he elaborated, is also key because, “my idea of sophisticated, natural style has always received an enthusiastic response from the public, and because American women know how to wear my style in a way that is all their own and always different.”

Asked what he specifically loved about America, he pointed to “the pragmatism. You get the feeling that if you have a good idea and the tenacity to put it into practice, you can actually realize it here.”

Perhaps that also explained the mammoth undertaking the event was. After 12 days of construction, the SuperPier was transformed into Armani-world, replete with an exhibition space, a nightclub and a runway show venue, using nearly 97,000 square feet of purpose-built space at the raw venue. To mark the occasion, Armani also created a “Nude” ready-to-wear collection influenced by the fall couture, exclusive to his Madison Avenue boutique as well as at Bergdorf Goodman.

On Wednesday, there was a flurry of activity in the headquarters here. Models, among them Frankie Rayder, were arriving for fittings; a makeshift atelier had seamstresses making final adjustments on looks for the show. One Italian editor — of about 30 members of the foreign press in town just for the occasion — stopped by to check out the scene. Armani and his entourage were in the middle of it all.

The designer expressed a vote of confidence in New York and the importance and ongoing potential for the brand in the U.S.

“It always has been such an important market,” he said, “with highs and lows, from the beginning. It’s been very positive as well because it was the first country to react positively to my fashion, so it’s very important to me. I have something to give back to America.”

Pressed to elaborate on any peaks and valleys, he elaborated with several thought impulses. “The market. The highs and lows of the recession. Sometimes, the press has not always been very supportive and has maybe put a shadow on my work, as well as the work of others. This is very important for me because I remember this every now and then.”

“One Night Only” and “Eccentrico” are not new ideas. The latter exhibition of unique clothes and accessories was previously shown in Milan, Tokyo, Hong Kong and Rome, though the New York layout has been altered with additions and large photographs of some of the pieces on the walls.

“The idea of ‘One Night Only’ is an idea that’s been around since 2001,” he said. “Things in the world have changed a lot. If you look in the recent years, many brands and many other people do a lot. There are a lot of big events happening around the world. I feel that sometimes someone has to also give, and give back to the city.” And, he added, he was keen not to go overboard but make a statement that was powerful but also made sense for the company — “One has to find a fine line…an equilibrium,” he noted.

He didn’t disclose the cost of the event, and would only say, “I still haven’t put all the money together, I haven’t added up all of the costs.”

While in New York, he was fully focused on preparing for the event with little time for anything else. He was staying at his Upper West Side apartment, and shuttling back and forth between the company’s headquarters on Fifth Avenue and the SuperPier. He didn’t get to one of his favorite New York pastimes — taking in a Knicks game at Madison Square Garden. Armani is a big basketball fan and actually owns his own team, the Olimpia Milano. “Unfortunately, I won’t have time,” he said. “In New York, it’s this desk, this office, the Pier and my house, and then I’m leaving.”