Long-standing supporters including Tina Turner, Samuel L. Jackson and Sophia Loren were among revelers at the "One Night Only Roma" event Wednesday night. 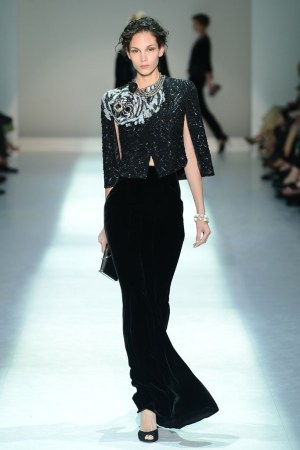 Sophia Loren perfectly captured the setting and mood of Giorgio Armani’s “One Night Only Roma” event held Wednesday night in the Italian capital. Other long-standing Armani supporters such as Tina Turner and Samuel L. Jackson walked up the imposing staircase of the travertine marble Palazzo della Civiltà Italiana (Palace of Italian Civilization) at sunset with an eclectic group of guests, ranging from Rome-based designer Laura Biagiotti and her daughter Lavinia; Olympic swimmer Federica Pellegrini, and Cinecittà stars including Alba Rohrwacher and Valeria Golino to models such as Eva Riccobono, actress Milla Jovovich and fashion and automotive heirs Matteo Marzotto and Ginevra Elkann.

They all viewed the “Eccentrico” exhibit on the ground floor, where the designer’s most eccentric designs stood out against an all-black and starry backdrop. “Armani is so classic he’s become eccentric on his own,” said the ever-energetic and ebullient Turner. “His designs were a bit too elegant for my style onstage,” admitted the artist, “but now that I’m retired, I only wear Armani.”

Jackson said the sequel to “The Avengers” will be out in summer 2014.

Asked when her next movie, “The Search,” will be in theaters, Bérénice Bejo said: “You don’t work in movies, do you? You never know when it’s coming out.”

After the exhibit, guests moved onto the first floor and to an all-white catwalk and seating and strategically lit arches. At the end of the runway show of the Giorgio Armani and Emporio Armani fall collections for men and women and of Giorgio Armani Privé for spring, the designer and the 112 models received a standing ovation.

The packed after party drew 700 people to the building’s third floor that offered a view of Rome.

Earlier in the day, Armani said he will start opening his Milan theater on Via Bergognone to Italy’s new generation of designers. The first will be Andrea Pompilio, scheduled to show his spring 2014 men’s collection on June 22 at 11:30 a.m. during men’s fashion week.

Following Pompilio, a former winner of the Who’s on Next talent search, Armani in September will provide his runway to a yet-to-be-announced young designer during women’s fashion week as the next step in this long-term program. Each season will feature different guests.

“It’s time to act, to show that we are doing something for young designers,” said Armani during the unveiling of his newly refurbished Via Condotti boutique in Rome. “We need concrete actions to support Italian fashion, initiatives that give more strength and a feeling of novelty to Milan’s fashion week.”

Pressed by reporters, Armani reiterated that his request for all Italian brands to show in Milan remains a necessary condition for his joining the Italian Chamber of Fashion, while urging designers to “stay compact” and work on extending the city’s fashion week to 10 days. He criticized Vogue editor in chief Anna Wintour for “forcing” Italian designers to “change our schedules. How dare she, with such an industry and all the production we have here?”

Without naming her, Armani also hinted at Miuccia Prada’s reported reasoning behind her choice to show Miu Miu in Paris. “Someone said there was not enough time to produce two runway shows during the same week, but this is a motivation that does not [satisfy] me — I do it,” said Armani. “Someone years ago suggested I show in London, but how long can that last? I have 70 people working on a show, think of the airfares, the hotel bills.…I have a major theater here, why should I go show at a bar in Paris?”