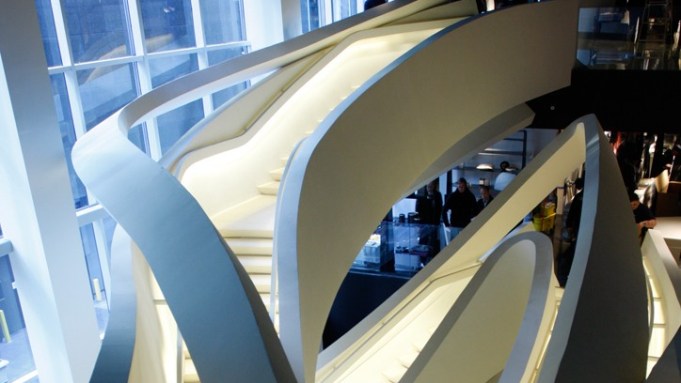 “Sophia Loren said grazie to America when she received the Oscar; this is my way of saying merci to the first market to open up to my world.”

So says Giorgio Armani, referring to his new Armani/5th Avenue megaflagship that opens today — an immense store he called “very New York,” based inside a glass structure on the corner of Fifth Avenue and 56th Street.

The store imports the drama of the city to its interior, which is marked by a striking, sculptural grand staircase. It also brings Italy’s fashion giant to a part of Manhattan that is home to significant stores by some of Armani’s countrymen, including Gucci, Prada, Versace, Fendi, Bottega Veneta and, a few blocks down, Diesel, which is also opening today.

The Armani store’s design capitalizes on the corner location, and the glass structure offers views up Fifth Avenue, to Henri Bendel across the street, to Bergdorf Goodman and to Central Park a few blocks up. The location resonates with Armani on an emotional level.

“It is a very important location, next door to Bergdorf Goodman and Henri Bendel’s, which in the Seventies were my idols, so you can imagine how filled with emotion I am,” the designer said, sitting in a curved banquette in the store’s top floor restaurant on Monday. “At 75, I got to Fifth Avenue, across the street from those who were my idols in the Seventies.”

He recalled once having an area at Bergdorf’s “so small you could maybe only sell 10 dresses in there. And Bendel is the one store I looked at with so much attention because it was a small but very sophisticated store.”

Of course, much has changed since those days, and the designer’s 43,000-square-foot store is another symbol of the strength of his business. Although the global economy has nose-dived since the designer’s announcement to invest here a year ago, Armani has no regrets. That said, mirroring the gloomy times, he decided to nix a post-opening bash complete with a runway show and dinner, contributing the sum to a charity he plans to unveil at a press conference today. The press conference will be followed by a store opening party that is expected to attract Alicia Keys, Victoria Beckham, John Mayer, Josh Hartnett, Martin Scorcese and Emile Hirsch, among others.

“One must go on. [This store] is an act of courage and faith towards America, a country that has supported me from the very beginning,” he said. “I think an entrepreneur should demonstrate a certain degree of bravery, even in difficult times, and I certainly wasn’t going to change my plans.”

Armani declined to reveal how much the store cost, or first-year sales projections, but admitted, “It’ll take quite a few years to recuperate the costs. But I’m interested in making the store work.”

Armani knows well what the challenges are, describing fashion as “overly inflated and the expectations one has from it, excessive.”

“Every year, one feels the pressure of increasing sales by 20 percent but I’m not sure that’s right,” he said. “Maybe all one should do is find a stable positioning [in the market] and defend that position because otherwise you venture into a market that isn’t yours anymore. Everyone started doing everything lately and at the first signals of recession, the consumer says ‘Who needs another Armani bag?’”

Determined to send out a clear message of change, the store represents his interpretation of the current trend for mixing genres and juxtaposing items in different price brackets.

The four-level store develops vertically, spanning from casual to posh. It carries Armani’s multitiered world, allowing shoppers to dabble with a vast assortment of labels and categories, including the first U.S. Armani/Dolci corner stocked with refined pralines, preserves and teas.

Armani designed capsule collections for Giorgio Armani and Emporio Armani that are exclusive to the store. The signature range for men and women includes python jackets and blue cashmere T-shirts and limited edition jeans, in white and blue, bearing the “Armani/5th Avenue” logo. The leather goods selection offers glossy asphalt gray python accessories with satin lining, plus maxi hobo bags and oblong rigid clutches in napa with a croc effect.

For men, Armani envisioned crocodile messenger bags and briefcases with a detachable case for BlackBerrys, iPhones or pens.

The designer spun more edge into Emporio Armani exclusives with Lurex or silicon effects on leather blousons and a slew of five-pocket jeans with leather labels. The special offerings extend to eyewear and watches.

The designer hopes the exclusive products and the store’s layout will encourage consumers to spend.

“Today even a wealthy woman is careful about how much she spends for a basic garment,” said Armani.

“This store allows me to showcase my lines in the best manner possible, to reflect my taste. Department stores have too many filters when it comes to choosing which and how the items are displayed, and sometimes the result isn’t always good,” he claimed.

Armani chose Fifth Avenue because, while it may be less exclusive in character than comparable addresses, he says it has a democratic mood, which the designer is certain represents the future. His store on Madison Avenue will remain open.

“There are still the luxury brands like Prada, Gucci, there is still Bergdorf’s and Takashimaya, and next to them, there are some brands that are maybe easier to access and more affordable,” he said. “That is why I decided to mix together Emporio with Giorgio Armani.”

Armani once again turned to architects Doriana and Massimiliano Fuksas to create the glass cube, whose main concept is that of fluidity. But he’s quick to point out it was a group effort, because he would never allow one of his stores to become someone else’s architectural “object of desire.”

Curved walls and tables exude a sense of movement, a feeling that is heightened by a grand staircase made with rolled calender steel and covered in a plasticized material that enhances its sculptural, vortex-like form.

The color scheme “is very Armani” with a sea of beige, black lacquered details, flashes of glossy metal and special lighting.

“This store is an experiment for me as well. I’m still learning how to dose the various products but I do think it’s quite exceptional,” said Armani.

When queried about the validity of drawn-out seasons and early deliveries, which, among other things, have led to furs in store windows in July and to ever-earlier markdowns, Armani defines it as a “gran casino,” or a big mess.

“People are adverse to it. I’ve always maintained that’s not my history, or Europe’s for that matter, but we had to adjust to the flow,” said Armani. “I think now is the reality check to see if the wheels put in motion 20 years ago by U.S. department stores are still valid.”

For his part, he plans on revising the delivery windows to better reflect consumers’ needs.

Armani also took a dig at the press, which he deems “too powerful. [The media] talks too much, demands too much and advises too much. I think everyone needs to get back in line,” said Armani.

He resents how magazines show an improbable dress on a page and make it look good thanks to the photographer, the model, the hair and makeup, and so forth. “But in reality that product is what it is,” said Armani.

His arrival on Fifth Avenue is giving a further boost to a stretch already heavy on Italian flagships.

“Italians are very bright and very dynamic, and in Ginza in Tokyo, for instance. The Italians are very present and very brave, and perhaps it’s because they have product that sells well, which is not a bad thing,” Armani said. “Perhaps it’s not too much in the sense of ‘fashion’ but they sell pretty well, and this must be told to a certain part of the American press, which protects all the foolish things which are too much. This is my message.”

Nonetheless, he has been noticing an air of change in New York since arriving on Saturday.

“I see less people walking around, and I see that people are not so full of pride anymore,” he said. “I see people are more careful now. I always thought that sooner or later, this tendency to do things ‘too much’ would have created some problems. Saying that, it might sound like I am contradicting myself because I have created this space. It’s not a small boutique that is 15 square feet or something.”

He added the store was planned several years ago, and is also a way for him to show his ongoing commitment to the American market. Armani’s love affair with the U.S. harkens back to the early Eighties. “I’ll never forget my first show at Rockefeller Center when at the end of the show the audience was silent. I was about to faint when a loud and hearty applause broke out. It was amazing,” recalled the designer.

He still enjoys going out in New York City. After arriving on Saturday, Armani dined at Scarpetta and went to the nightclub Cielo. And on Sunday night, he had dinner at Pastis. “Instead of going to a chichi restaurant where I have the feeling of being Giorgio Armani, there I was one of many customers,” said Armani, who has a penthouse in New York on Central Park West. “People were saying hello to me, waving at me, but it’s a part of New York that I love, to be part of the community.”

On his next trip, he will have his own eatery serving modern Italian fare. “I hope the next time I come, I will have dinner here,” Armani said of the restaurant. “This restaurant is very special and in a special location. I think it will work very well in the day, but hope it will also become a destination for the evening.”

In fact, it’s among his favorite parts of the store — that and the staircase, which Armani believes has the towering appearance of the dinosaur skeletons at the American Museum of Natural History.

“The restaurant with the opening to Fifth Avenue is something exceptional, and then the great staircase that could look disproportionate actually gives power to the space,” he said. “A smaller staircase would have looked too small. I hope in the evening, people here in New York will say, ‘Let’s go have dinner at the dinosaur.’”