Salvatore Ferragamo’s creative director presented the house's resort collection in the U.S. for the first time on Tuesday. 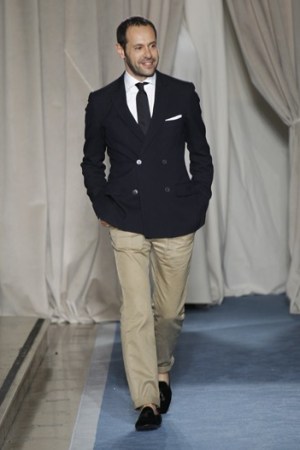 NEW YORK — Despite an unexpectedly drawn-out journey from Europe, Massimiliano Giornetti breezed into The Peninsula’s rooftop bar looking relaxed yet pulled together.

Travel, much like the current state of the global economy, is more often than not disruptive, but Salvatore Ferragamo’s creative director appears to be gliding by nicely. The same might be said of Salvatore Ferragamo SpA, which had its initial public offering today in Milan in a flotation that was expected to value the company at $2.1 billion. Ferragamo planned to float about 25 percent of its stock on the Milan Stock Exchange in a deal worth 379 million euros, or $545.2 million.

Riding the momentum of that milestone, Giornetti jetted off to New York to present Ferragamo’s resort collection Tuesday in the U.S. for the first time. While most of his competitors zero in on women’s or men’s wear, he designs both for the 83-year-old luxury house, and last week earned high marks from critics in Milan for his men’s collection, one of the standouts of the week.

After 11 years at Ferragamo, the Italian-born Giornetti has ingratiated himself with the Ferragamo family and colleagues alike with his loyalty, leading inevitably to more responsibility — last summer he was named creative director for all products. Asked if other brands have come calling in the past few months, he smiled wryly and said, “I have had many offers from many other brands, but what keeps me superhappy is the passion of the Ferragamo family and the passion of my customers.”

Giornetti revels working for a company that shares the same values, dreams and commitment to craftsmanship, and he is trying to relay a joyful Italian life through his clothes and advertising. He frequently references the company’s founder, Salvatore Ferragamo. “In a way, I’m simply trying to revamp the brand and make it cool and chic in the spirit of the brand,” Giornetti said. “In my vision, I think about fashion as living and working with people. In some ways, it’s alive. It’s not just fashion but architecture, art and cinema. What is beautiful is beautiful everywhere.”

Accessories are still unquestionably the brand’s bedrock, but ready-to-wear, a category that until now has struggled, is gaining ground under Giornetti’s direction. He chalked up his predecessors’ fits and starts with women’s wear to the fact that no one was really given a chance to create a solid ready-to-wear collection. “In a way, it was really lacking identity, where people said, ‘Oh, OK, that’s cool, but why buy at Ferragamo?’ But now, in the last season, it has really become different with the advertising and the coherence between the categories. The coordination between the core business — the shoes, the bags, the leather accessories and the ready-to-wear — is making the story more consistent for the consumer.”

Corporate-speak as that might sound, Giornetti was more cinematic in describing resort, which he hoped would be received at the James B. Duke House as an effortlessly chic collection. Inspired by elegant women of the Thirties — think Horst and Man Ray —the 35 ensembles were meant to relay a crystal-clear image of the Ferragamo woman. Giornetti envisioned Old World movie star elegance much like the ones Salvatore Ferragamo dressed when he started his career in Hollywood. Decades later, Giornetti’s take has more of a sleek, modern practicality, as evidenced by white wide-legged trousers and snug cashmere crewneck tops. To ensure the Tinseltown slant is still there, Frederic Sanchez did the music for Tuesday’s show, mixing Humphrey Bogart lines from “Casablanca,” audio clips from a Lauren Bacall interview and songs from Bryan Ferry.

Asked if he plans to take a more public role as creative director, Giornetti said, “Like a guest star?” Although he met with producers from Italy’s national TV two weeks ago, he declined to elaborate and noted that he is more interested in interacting with customers one-on-one. “I like that very much, even exchanging a point of view and understanding how people perceive Ferragamo. It’s interesting how people [in Italy] love Salvatore Ferragamo and even the workers of Ferragamo. Some people don’t know very well the history of Salvatore Ferragamo working with stars like Greta Garbo and Rita Hayworth in Hollywood.”

Reverential as he is about the brand’s heritage and archives, he said he is not interested in vintage or reinventing a collection. “In my mind, this resort collection is the ideal suitcase for a very chic and elegant woman. She can mix, match and invent anything to suit her own personality. I like very much this idea of beauty, especially now when everything else is so frenetic.”

Giornetti, at ease as he is working on the men’s collection, enjoys the creative freedom that the women’s line allows for. “If you look back at the last 100 years, men’s wear pieces haven’t changed as much as women’s. In many ways, it is not as free,” he said. “What I really like about women’s is I can play with colors, patterns and prints more. It’s not for a different woman, but a different moment for this woman. And that’s life.”

China, which Ferragamo first tapped into in the Eighties, is a top target for future growth, especially since more women are gaining greater spending power through senior level jobs, Giornetti said. But the brand is not banking on any one region for a windfall of sales. To get a better handle on what items are selling where, Giornetti takes a close look at weekly sales reports for Ferragamo’s stores, of which there will be 578 by yearend. “I am not obsessed with sales, but it is very important to understand how much is moving and when — not only in China but all over the world,” he said. “I don’t think as a designer you can live in a golden cage. It is very important to understand the consumer in the street and how she translates the fashion message you are sending.”

In terms of measuring his own success, Giornetti said, “As much success you have, the less time you have for yourself. That’s basically my new rule. One week ago in Milan after the men’s show, everyone was saying, ‘OK, how will you celebrate the collection?’ and I said by working on a new collection. There really is no moment where you can switch off and disconnect with the world. But it’s beautiful when you have beautiful people around you who you like and who are giving you energy. Sometimes it’s very difficult to work in fashion because there is a lot of competition and it is not so easy to create a solid and loyal team. But I can say I really am working with people who really are like my family.”

Given that, it’s not surprising that he has been known to vacation with colleagues. But if this summer’s getaway plays out like a Ferzan Ozpetek-directed film, as he hopes it will, Giornetti will be get a little R&R surrounded by friends on an island near Italy — not too far from work.