The brand's worldwide traveling exhibition makes its final stop at its Madison Avenue boutique today and runs through Nov. 23. 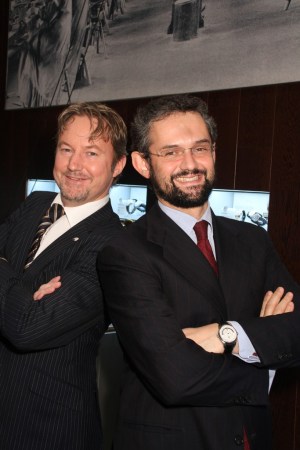 This marks the first time that many of the company’s masterpieces, some dating back to the late 18th and 19th centuries (it was founded in 1791), will ever be seen by the U.S. public. Before reaching New York, the exhibit was in Singapore and Shanghai, and other pieces from Girard-Perregaux’s museum in La Chaux-de-Fonds, Switzerland (which will reopen next year), were displayed at Printemps in Paris.

“The exhibition [showcases the most] important stages of Gerard-Perregaux’s history, and we try to emphasize the technical and design aspects of the watches,” said Stefano Macaluso, general manager of Girard-Perregaux parent Sowind Group, the haute horology firm that owns the brand known for creating all of its complicated movements in-house. “We show the history, as well as a larger point of view, so we make the association between big historical events and trends — like Art Nouveau and Art Deco.”

Girard-Perregaux’s president of North America, Frederic Leys, added, “It’s the first time that we will bring the most beautiful museum pieces to New York — but it’s not only that. We want to show the tradition of the company and also the evolution of watchmaking from the old pocket watch to modern wristwatches.”

Macaluso said that the famous “La Esmeralda” pocket watch — the tourbillon with three distinct gold bridges that won a gold medal at the Paris Universal Exhibition in 1889 — was the basis for the brand’s iconic Tourbillon watch, which is showcased at the exhibit. Additionally, a special edition was reimagined for the anniversary, the 1966 Tourbillon With Gold Bridge, complete with a refined face, 224 components and a patented self-winding system.

He revealed that the brand is working on a new generation of minute repeaters that will be an important initiative for the company in the coming year. Additionally, a new patent based around the concept of “constant escapement” — which Macaluso refers to as “the most ambitious” movement the brand has created to date — will enter the market in 2012 as well. The watch will retail for around $100,000, and uses a new concept in mechanics that promises the most accurate timekeeping.

Leys said the brand has big plans for the company in the U.S., specifically. It is looking to raise brand awareness here, as well as introduce a more aggressive marketing strategy — a result of its acquisition by PPR, which became the majority shareholder last July.