Give Them A Hand: London’s Man-Made Designs

London’s designers are having a love affair with handmade designs.

By Samantha Conti
with contributions from Stephanie Hirschmiller
on November 11, 2013
View Slideshow 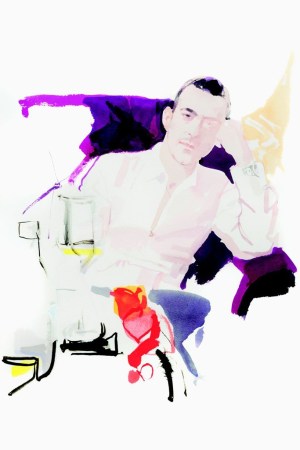 London was awash with illustrations and prints made the old-fashioned way—with bare hands and no computer keyboards—on and off the spring runways.

Williamson’s collection was full of hand-drawn prints, a universe away from his usual digital ones. There were botanical motifs, hand-drawn daisies and dragonflies on loose, languid silhouettes while big, cartoonish flowers blossomed over floor-sweeping tunics and sheer blouses.

“I wanted the prints to look like a five-year-old girl had done them, and I wanted to take a different trajectory, to explore prints in a much more organic way, focusing on man-made rather than machine,” Williamson said, adding that the hand doodling and graffiti was inspired by the late Keith Haring.

“Digital prints have been so popular in the last few seasons, and it really reflects where we are now in terms of technology: We are so heavily reliant on it. Switching off the computer and returning to hand-drawn techniques added a new dimension. The imperfect patterns gave the collection a more carefree, spontaneous spirit.”

“At the time, I had no idea who he was, but I loved his hand,” said Deacon. “And I had wanted to do lips, but in a different way.” He said he could easily return to handmade designs in the future. “I don’t think anyone wants to see any more mental digital repeats anytime soon.”

Off the runway, leather accessories and stationery brand Smythson tapped British illustrator and filmmaker Quentin Jones to create a series of collages of famous fans of the Panama Diary. The images are of a disparate bunch—from Sigmund Freud to Dita Von Teese, Erdem Moralioglu to Katharine Hepburn—and each features a letter of the alphabet that spells out Smythson.

“It’s paint, it’s paper, it’s not digital or slick or computerized,” said Rory O’Hanlon, the brand’s design director. “The images are playful, and we’re sharing what Smythson has been, what it is, and what it will be.”

The show, at Mouret’s Mayfair townhouse, was meant to mark the 70th anniversary of Lopez’s birth.

“When I was young, Antonio was one of the people who made you dream about fashion,” Mouret said of the bold, Pop Art-y works on show.

At the Mayfair Hotel, Claridge’s artist-in-residence David Downton unveiled his “Midnight at Noon” exhibition, and talked about the intimate overlap between drawing and life. During his two-year residency, Downton has hand-drawn hotel guests including Diane von Furstenberg, Joan Collins, Alber Elbaz, Christian Louboutin and Erin O’Connor.

Of the latter, he said: “She looks like a drawing in all her proportions, and everything I try to do on paper she is in life—so she makes me look good.”