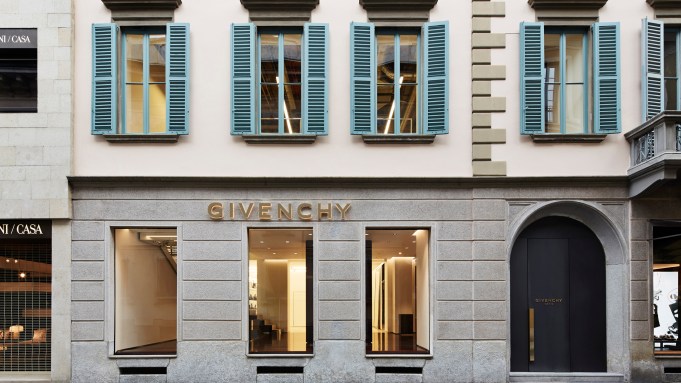 The retail expansion has now hit Milan, where the company has quietly opened its first Italian flagship on the exclusive Via Sant’Andrea, a few steps away from Via Montenapoleone. Word has it Givenchy and Tisci are planning an event during Milan Fashion Week later this month to mark the new retail outpost.

“The Givenchy approach is to carefully assess the countries and cities where we seek to gain visibility through our retail presence,” said chief executive officer Philippe Fortunato. “We are highly targeted in our analysis and ensure that our store matches its surroundings and vice versa in order to create the right brand messages. This strategy also means that we continually assess our existing stores and ensure that they stay in step with changes in their own locales. An example of this is the recent renovation of our men’s wear boutique on Rue François 1er in Paris.”

In Europe, the company has set its sights on the U.K. and Italy. “These are two of Europe’s most important fashion centers with highly style-conscious resident populations. They have a history of creativity and trend leadership while attracting tourists from around the globe,” explained Fortunato. In addition to the Milan flagship Givenchy plans to add the brand’s first unit in London at the beginning of 2017.

“While we are a French house, Italy is a very important market to us, not only in terms of its international reputation for high fashion but most importantly, emotionally, as it is the birthplace of our artistic director Riccardo Tisci,” the ceo said.

Discussing rumors about a pending opening in Rome, he said, “We have just opened our flagship in Milan and, while the first results are encouraging, it is too early to talk about another boutique in Rome. Every store opening is different and needs to match its environment so we would need to consider what Givenchy could bring to Rome and what Rome could bring to us. Another opening in Italy may seem logical, but we do not believe in being constrained by what is logical and expected. Our next move will be dictated by the creativity of our house and the voice of our customers.”

At the same time, Fortunato defined the U.S. as “one of the largest luxury markets in the world,” offering “outstanding growth potential.” To wit, in addition to the new flagship that opened in New York’s Madison Avenue last month, Givenchy recently opened shops-in-shop at Saks Fifth Avenue in New York and Miami alongside a directly operated store in Miami’s design district.

Fortunato said Givenchy’s retail division “has become increasingly important” and that its directly operated store network has seen double-digit growth over the past three years. “I expect to see equal sales across wholesale and retail by the end of 2015,” observed Fortunato.

The Milan flagship, which carries men’s and women’s apparel and accessories as well as eyewear, is an additional step in the brand’s strategy of creating tailor-made boutiques.

The sophisticated street suits the intimate mood of the venue, located in a stately and bourgeois Milanese palazzo. Covering 4,320 square feet and with three windows fronting the street, the store is reminiscent of an art gallery and features a number of small rooms, each different — for example, one showing green tiles, another, white ones. In sync with Tisci’s propensity for pure, sweeping lines, the products are displayed against a minimalist yet bold backdrop.

“We seek to be relevant and modern by increasing the contrast of what we do within the store. It is all about surprises and challenging expectations while respecting the past,” said Fortunato of the aquarium on the ground floor. “We wanted to create something that was consistent with our brand values and would be as relevant to today’s market as it will be to tomorrow’s.”

Mirrored stairs lead to a space on the first floor where shoes and accessories are laid out on stout podiums ranged symmetrically before a large block, “recalling pews before an altar,” said the company.

Sleek, dark zebrawood, lacquered to differing levels, is one of the main elements of the store, as well as concrete and mirrored shelves, which stretch along the whole length of one wall.