Fashion and beauty, the yin and yang of Givenchy, coalesced into a mini public relations whirlwind that touched down in New York this week.

By Marc Karimzadeh and Pete Born on October 30, 2009
View Slideshow 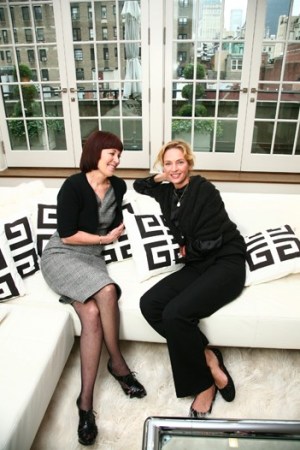 Fashion and beauty, the yin and yang of Givenchy, coalesced into a mini public relations whirlwind that touched down in New York this week.

This story first appeared in the October 29, 2009 issue of WWD. Subscribe Today.

The French design house, a unit of LVMH Moët Hennessy Louis Vuitton, orchestrated press interviews on Wednesday with Uma Thurman, the face of its upcoming Ange ou Démon le Secret fragrance, the third incarnation of its Angel or Demon perfume franchise. The day before, Givenchy designer Riccardo Tisci rewrote the playbook on trunk shows by spurning the customary practice of planning store appearances well in advance. Fresh off the plane from Rio de Janeiro, where he attended Fashion Rocks, Tisci popped into Barneys New York Tuesday and made an appearance that seems to have come together just a day before. The word was spread in a guerrilla campaign of sorts through blogs and Twitter.

“Who doesn’t like a surprise?” said Julie Gilhart, Barneys’ senior vice president and fashion director. “It’s hard to plan ahead on everything so it’s nice to be able to be spontaneous.”

Tisci was 30 minutes late to the hour-long event — so much for spontaneity — but he nevertheless had enough time to catch up with Gilhart and Barneys’ Judy Collinson, and greet shoppers and Barneys’ sales associates. “It’s important for me to come and meet the clients,” said Tisci, who decided to stay in New York through Halloween.

While in Gotham, the designer said he would be working on theater costumes for a 2011 production. Tisci wouldn’t disclose any further details other than to say the project is in collaboration with an artist.

The Barneys event also served as a launch pad of sorts for Givenchy’s new Capsule collection of white blouses and studded items, which are priced at 40 percent below the main line. From the resort collection, bestsellers on-site included a Capsule collection sheer sleeveless crepon blouse with rosettes for $795, and a washed leather jacket with vintage crystal embroidery for $2,260. Top orders at the spring trunk show, meanwhile, included a striped knit jacket for $1,620; a sleeveless belted crepe dress for $2,410, and a Keffiyeh print silk charmeuse ruffle blouse for $2,250.

The next day, Thurman met editors in an Upper East Side town house. The actress chatted about her relationship with LVMH (“one of the most elegant and professional organizations to work with”) and the newly reenergized focus of her career with her new movie “Motherhood” (“I’m trying to get my feet back into my creative life, trying to get things together. It’s a great privilege in life to have missions.”)

Meanwhile, Pamela Baxter, president and chief executive officer of LVMH Perfumes & Cosmetics NA and president and chief executive officer of Christian Dior Inc., was sketching details of the February launch of Ange ou Démon le Secret. The original Ange ou Démon was launched about two years ago as an exclusive at Nordstrom and achieved top 10 status, Baxter noted. The first fragrance was positioned to represent the angelic and demonic duality of personality. The second edition, Ange ou Démon Tendre, was skewed to the sorceress side, while the latest rendition comes down on the angelic side.

Baxter suggested the new Le Secret, which will be given a full 2,000-door department store distribution, will be met with a more broad-based acceptance because of the accessible formula. “It starts out with those bright sparkling citrus notes, which the consumer loves because it feels clean and fresh.” Baxter said, adding the “big florals” of jasmine and peony are another draw with the American consumer.

Thurman will appear in a print ad shot by Mario Testino to promote the U.S. introduction. In Europe, she will appear in a commercial directed by Mira Nair, who also worked with Thurman on the film “Hysterical Blindness.” The commercial will not be broadcast in the U.S.

While Thurman noted that, as an actress, she was drawn to the concept of duality of human nature, she admitted, “It’s kind of tricky and challenging. I thought Mira would bring to it some sultriness and wit” and “she wouldn’t pander to anything about it that I wouldn’t like.”

Thurman has become more comfortable with doing a commercial. When she started a decade ago, the actress fretted that it might erode her artistic image. “At the time, there weren’t a lot of actors doing endorsements or doing a creative commercial like this,” she said, adding, “It seemed very risky to the creative career. Times have changed; now all my colleagues have perfumes or stuff like that.”

While allowing that she is sometimes tempted by thoughts of landing a plum fragrance deal, Thurman said she realizes her priority is her artistic career. Following the opening of “Motherhood,” she started filming “Ceremony.” It’s written by Max Winkler, son of Henry Winkler, and is the young Winkler’s directing debut.

“I like things that are about modern life,” Thurman said in describing her taste in movie projects. “‘Motherhood’ is exploring honestly the modern life of trying to balance commitment to your family and losing yourself as a woman and trying to refind yourself. It’s a deep subject that’s playfully explored.”

Thurman added, “Life has accelerated at cannonball speed. Everyone is feeling the intensity. We don’t know where we are going. The leg has been knocked off of our proverbial stool.”