After years of having a relatively small presence in the Japanese market, the brand is finally opening its first freestanding store.

By Kelly Wetherille on May 15, 2014
View Slideshow 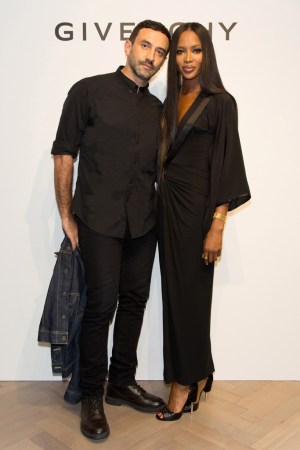 TOKYO — After years of having a relatively small presence in the Japanese market, Givenchy is finally opening its first freestanding store here and marked the occasion with a cocktail reception featuring the likes of brand designer Riccardo Tisci and Naomi Campbell.

The designer and supermodel mingled with guests over Champagne, and Tisci posed for photos with fans; Tisci signed a party attendee’s Nike sneakers that he designed, and toward the end of the evening both Campbell and Anna Dello Russo were seen dancing to music spun by DJs the Martinez Brothers.

Sebastian Suhl, Givenchy’s chief executive officer, declined to give sales or sales-growth figures for the brand but the executive said the brand’s growth in Japan has been “very robust.” While he allowed that the brand is “overdue” in terms of opening a flagship in the Japanese capital, he said the timing works because the “market is great; our brand is doing very well here.”

The Givenchy store is located at the intersection where Omotesando meets Aoyama and in the same building as fellow LVMH Moët Hennessy Louis Vuitton brands Céline and Loewe — both stores are currently under renovation. It is spread across three levels, with accessories on the first floor, women’s on the second and men’s on the underground level. The design follows Givenchy’s “black box” concept, which was conceived by Tisci and is inspired by the boxes in which founder Hubert de Givenchy would deliver his couture creations. The exterior facade is particularly striking, with its black metal meshlike covering, which gives it a different look depending on the time of day and how the light hits it. The Omotesando store is the brand’s 10th in Japan, with the others located inside department stores.

While Japan is certainly a more mature luxury goods market than many of its Asian neighbors including China, many brands and retailers have noted that its economy has been picking up over the past year or so, leading to increased consumption.

“I think partially because everybody was so focused on China and growth in China and Asia-Pacific in general, people sort of, I would say, forgot [about Japan],” Suhl said. “That wasn’t our case, that’s for sure, but Japan’s been a market that people maybe spoke about less in recent years, but nonetheless was still one of the largest for our industry in general terms. And now it’s interesting to see that growth is coming back here as well.”

Suhl said that Givenchy has not experienced any impact from Japan’s recent consumption tax increase, which went into effect in April and brought it up to 8 percent from 5 percent.

Looking into the future, Suhl said that Japan will continue to be a key market for Givenchy as it moves forward with its global retail rollout, which began about a year and a half ago.

Compared with other luxury brands, Suhl stressed that Givenchy has even more opportunity for growth in Japan and elsewhere, due to the fact that its retail footprint is still relatively small.

“We have considerable upside in many ways. Most importantly, in growing stores like for like and really penetrating the market,” he said. “We also have a significant upside in terms of store count. We are selective and we will continue to be selective, but we still have upside in terms of potential openings, both freestanding and inside department stores.”

While the brand currently has no concrete plans for subsequent openings in Japan, Suhl said that the company is considering some options. In addition to other Tokyo neighborhoods such as Ginza, Givenchy is also open to opportunities in other Japanese cities, including Kobe, Osaka and Nagoya.

As for China, where Givenchy has 14 stores, Suhl said the brand has not seen any kind of slowdown in the market at all.

“We’re doing very well in China, most importantly on comp stores, but also the new stores we’re opening are doing very well. We find that in China our brand fits very well because we have this history, this maison, which obviously is very appreciated,” he said. “At the same time we’re very selective; we’re not everywhere, but by now we do have a decent distribution network. So it’s a good mix of things, and the fact that we’re cutting-edge and trend-setting, that’s also very good.”

Givenchy plans to open a store in Hong Kong’s airport next month, as well as a new Shanghai location in the coming months. Other major upcoming openings include stores in Miami and New York, which are expected either at the end of this year or early next year.