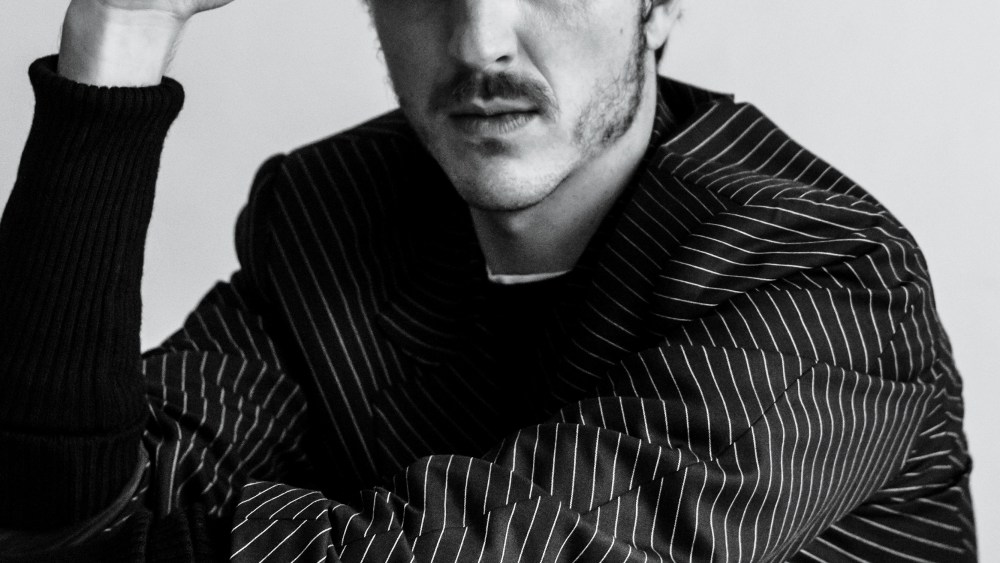 As a kid growing up in the historic, picturesque city of Bruges, Y/Project’s Glenn Martens developed an obsession with classical beauty. Later — once thoroughly schooled in the subject — he gravitated toward elements of local culture bordering on bad taste. After all, said Martens in an interview in his new digs on Paris’ Rue de Paradis — a hip but gritty street that looks nothing like its name — among Bruges’ museums filled with Flemish old masters were frites stands with aggressive neon lights and super-kitsch chocolate shops.

The duality storyline lives on in Martens’ collections, with the designer tumbling together disparate references from classical tailoring to streetwear to offbeat historical references. For spring, there’s a bit of a “pirate” thing going on, “something a bit more romantic,” alongside nods to his coming-of-age-decade: the Nineties.

“There’s always this ironic red thread in there, I like things to be a bit off,” said the designer, a graduate of Antwerp’s Royal Academy of Fine Arts, whose alumni famously includes the Antwerp Six, Martin Margiela and, more recently, Vetements’ Demna Gvasalia (also creative director at Balenciaga), the Pied Piper of a new wave of independent Paris-based labels intriguing the fashion world — Y/Project included.

“Demna was a few years above me, I was his fitting model,” Martens laughed. “He was always the star of the school, from the first year he arrived — like, Walter [Van Beirendonck] was really into him.”

For his part, Martens graduated first in the class, and was plucked to work at Jean Paul Gaultier, an influence that is evident in his work.

Y/Project’s success story can be put down to the hard craft and creative vision of Martens, who took over in 2013 under unusual circumstances: Gilles Elalouf, chief executive officer of Y/Project, then a men’s label, approached the designer to take over as creative director following the death from cancer of cofounder Yohan Serfaty — “that’s where the Y comes from” — just two-and-a-half years after starting the label. At first, Martens, who felt a little uncomfortable about the idea, declined.

“I was really skeptical about it in the beginning,” said Martens, who had worked as first designer to Serfaty a few years prior, on a separate project. But Martens was feeling a little burned out with running his namesake label as a one-man band and decided to take the plunge, drawn to the idea of having some sort of structure to work with, “as small as it was. There was literally no budget, the brand was quite unhealthy, borderline bankrupt.”

There was also the challenge of transitioning the brand. “You arrive at a new brand that’s also very niche and built around the personality of Yohan. Look him up on Google, he was really tall, super skinny, a bit like something out of a Tim Burton movie. A very strong character, strong aesthetic,” Martens said. “The creative direction of Yohan was very beautiful, it was darker, more of a Rick Owens vibe. I wanted something I was more comfortable with, something fresher and more modern.”

The risk paid off. “We really forced it through, and then it happened, it was unexpected.”

From the first collection, for fall 2014, he brought in women’s wear, which immediately outperformed men’s. With no resources to develop separate lines, he settled on making 40 percent of the collection unisex. “Some of the clients rejected the idea in the beginning, but now with the whole gender-fluidity thing, it’s working,” the designer said. (Rihanna picking a mustard-colored suit by the brand for her Anti World Tour wardrobe likely helped things along, too, with Beyoncé stopping by the studio on a recent sojourn in Paris to get some Y/Project gear for herself plus one of Y/Project’s signature deconstructed bomber jackets for Jay Z.)

Asked if he’s conscious of the buzz surrounding his label, the designer demurred: “Everybody’s talking about it…10 years ago there was this whole Belgian vibe with Bruno Pieters and Christian Wijnants….We’re based in Paris and, for the first time in a long time, there are independent companies that are making it. I mean, Paris is having a revival on many levels; there are all these illegal clubs coming out in the suburbs like Péripate, Champ Libre…it’s like underground Berlin.”

Making it as a runner-up in this year’s LMVH Prize proved invaluable for visibility, Martens said. But the real push came from presenting his first women’s collection in March. Now, he’s focused on developing new product groups, starting with shoes for next season, then bags, and solidifying the brand’s structure. His team is now nine strong: a pattern-maker, two designers, two in the commercial area and three in production.

Y/Project’s key markets are Asia and the U.S. From fall 2016 to spring 2017, distribution rose from 35 to more than 70 stores for women’s wear, with strong sales across all product groups, but especially denim, knitwear and outerwear. Prices range from 40 euros, $45, for a T-shirt to 1,250 euros, $1,390, for a dress. “It’s moving fast,” said Martens, who — considering the label’s cool-kid-catnip status — isn’t very active on social media, save the odd Instagram post. So how does he connect with his customer?

“Through visuals, we have really worked on a strong identity for the catwalk,” he said, having recently returned from a trip to London to decorate the windows of Browns’ South Molton Street boutique, using a collage of images spliced with various inspirations including artworks by Jan van den Hecke.

Shooting the new campaign with his longtime friend and collaborator, Arnaud Lajeunie, was also a return to his roots. “We went to Bruges and shot it on my grandparents,” he said, scrolling through his iPhone to find a shot of his 92-year-old grandmother, Huguette, posing sideways in a look from the collection, like an artist’s sitter. “The idea was to re-create a Flemish primitive,” said the designer, who also cast his brother’s kids in the series, with eight-year-old Leander striking a pose in front of one Bruges’ historic landmarks, triggering the image of a mini Martens soaking up his impressions of the city.