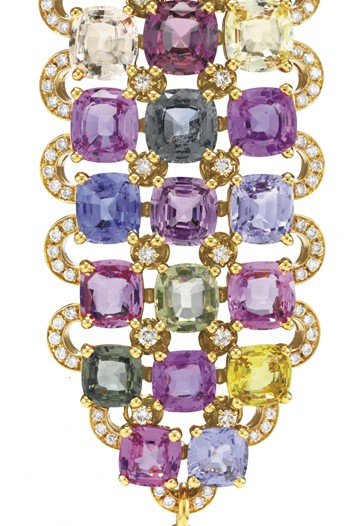 The lot has traveled the globe, most recently to Miami and Los Angeles, where celebrities including Ginnifer Goodwin and Ricky Martin were in attendance at various events to support the cause. The same personalities were some of those who were involved in Bulgari’s advertising campaign to promote Save the Children, which is dedicated to providing education for 8 million children living in conflicted areas. The $2.4 billion firm donated $1.5 million to the cause at the start of the year and pledged to raise $15 million by yearend.

Part of the fund-raising effort has been through the sale of a special silver anniversary ring and silver pendant for $290, of which $60 is donated to the organization.

The auction, to be hosted by Bulgari chairman Paolo Bulgari, vice chairman Nicola Bulgari, chief executive officer Francesco Trapani and Christie’s senior vice president and jewelry department head Rahul Kadakia, will be followed by a private dinner at which the likes of Martin, Isabella Rossellini and Patricia Field are expected.

The auction includes several important pieces of high jewelry and timepieces and is expected to exceed $2 million. One necklace comprising 450 carats of sapphires interspersed with up to 70 carats of diamonds retails for more than $1 million. The Lucia choker, worn by model Gisele Bündchen in a past Bulgari ad campaign, is estimated at $800,000.

“It’s not so often that you have a single-brand [auction],” said Kadakia, who added there is special interest in the sale because of its connection to Save the Children. “We’ve got clients from all over the world calling with absentee bids, which doesn’t happen for a charity auction.”

Trapani said the collection up for auction represents the best of Bulgari. “We chose 18 pieces that each represent a significant motif or theme in Bulgari’s rich history,” said Trapani. “The collection includes the serpent motif, antique coins, bold and unexpected combinations of multicolored stones and limited edition timepieces which are symbols of our watchmaking expertise.