The collection will be rolled out on July 2 and Moncler chairman and ceo Remo Ruffini said he believes in "offering tailor-made engagement and an emotional experience" in line with customers' local reality.

MILAN — The COVID-19 pandemic is not stopping the rollout of the latest Moncler Genius collection globally — yet with highly localized initiatives.

The 7 Moncler Fragment Hiroshi Fujiwara collection will be released on July 2 and the company has developed a hybrid physical and digital strategy running through Japan, China and Europe. The project blends different media, connecting e-tailers, partners and wholesalers, tailoring each activation to the regional culture.

“This is the third year of the Genius project and I see each year as an evolution, as an added layer to our strategy and long-term vision,” chairman and chief executive officer Remo Ruffini told WWD. “This upcoming 7 Moncler Fragment Hiroshi Fujiwara launch, in this particular moment, has offered an opportunity to create an even more diversified approach towards our client base, focusing on our digital capabilities.”

The launch in China was delivered through a livestreamed event on Tuesday with a team of local creators and within two hours it had reached over 17 million views. Singer and actress Victoria Song, comedian Pang Bo and TV host Nic Li discussed the collection, moving from a ramen shop to a futuristic studio setting, while giving styling tips on the new range. A Fragment truck will travel from store to store on July 1 and 2, serving customers with street bites inspired by the video set, culminating at Reel Mall.

Ruffini underscored the increasing relevance of Asia and China for the brand. “The Asian market is showing positive signs with different shades country by country,” he noted. “The Chinese market is showing strong signals of enthusiasm in consumer attitude and drive to purchase. In Japan, consumers, coming out of the lockdown have also shown the willingness to come back to a sort of normality. Today, more than ever, I believe it will be essential to stay close to our clients by offering tailor-made engagement and an emotional experience in line with their local reality, but all the while staying true to the DNA of the brand.” 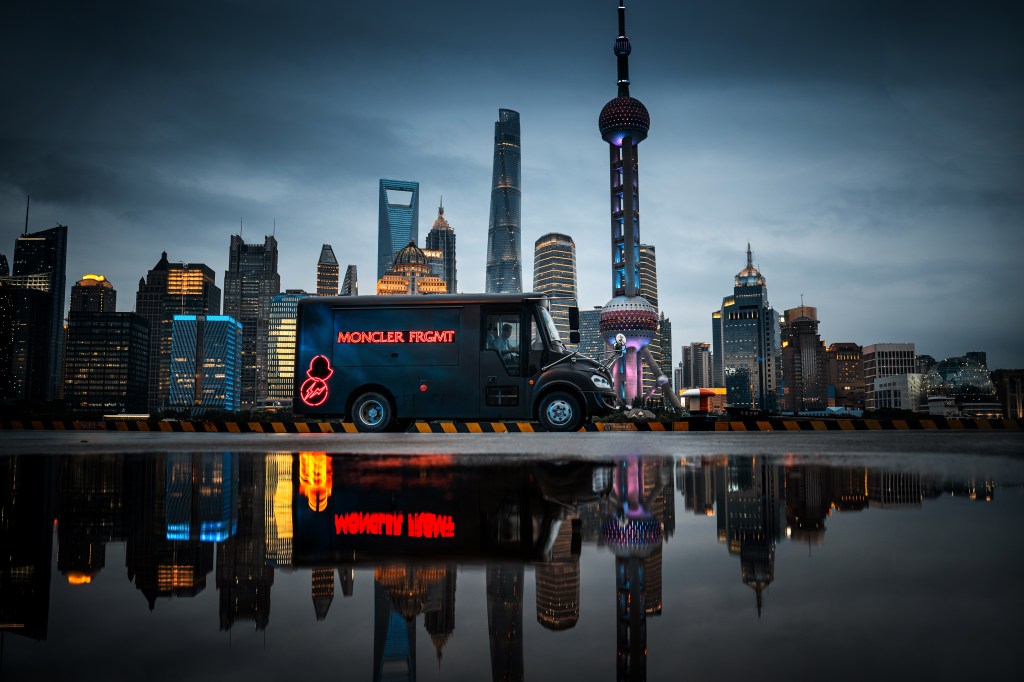 In Japan, Fujiwara’s home, Moncler believed in a more customer-centric strategy. Reuniting in a partnership with Japanese actor and singer Tomohisa Yamashita and director Genki Ito, Fujiwara released a film that explores a conceptualization of choices, with the protagonist moving into the night from a Tokyo ramen bar. “The choices he makes contribute to forming a new version of himself, something the director asserts is the true meaning of fashion,” stated Moncler. “Tomohisa’s characters’ decision-making process is visualized with a clash between a vintage MS-DOS-like aesthetic that symbolizes his mind, and a droid guided vision of the future; a cultural collision that is typical of Fujiwara’s creative output. And as his work is always deeply rooted in music, it fits that it is sound-tracked by the designer’s new original composition, “Territory.” On Monday, the film was shown at Tokyo’s Shibuya Crossing. The collection was previewed to Fragment fans through a Dictionary feature on the Line social platform, along with a Spotify playlist hand-selected by Fujiwara. 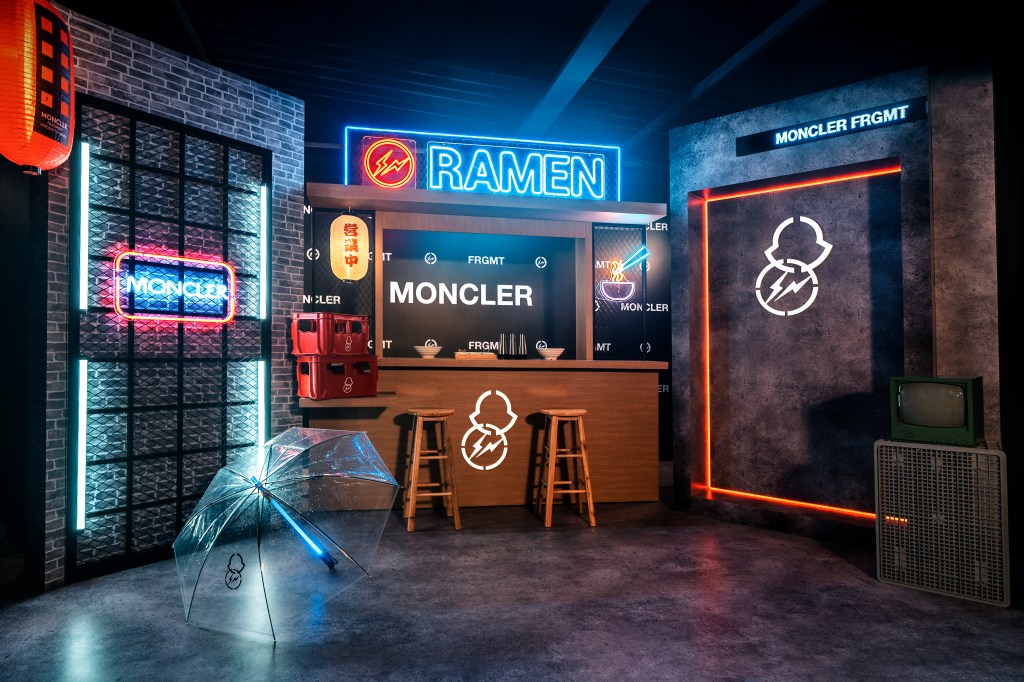 The global tour finishes in Europe, with a live DJ clash presented by Moncler and Matchesfashion. Benji B starts the night with a set in London, then the baton is passed to Licaxxx in Tokyo, with the sound clash transmitted to a global audience through IGTV.

The collection is shown in the “Not in Paris” project, an online exhibition curated by Highsnobiety running June 24 to July 2, which fills the void of the Paris Men’s Fashion Week canceled by the coronavirus pandemic.

This season, Fujiwara’s main slogan is Fragment Loves Mountain, displayed on matte nylon jackets — a wink to Moncler’s mountaineering history. Together with British leather specialist Lewis Leathers, Fujiwara revisited their biker jacket, including one in lacquered nylon. There are bomber jackets embroidered with the cover art from Kool & the Gang’s Spirit of the Boogie, and sweaters featuring the longitude and latitude of Fujiwara’s favorite restaurant in Paris. The collection is almost entirely black with flashes of yellow, green and blue. Accessories include canvas bags and a Converse Chuck 70 capsule.

Ruffini overturned the company’s business model and strategy by launching Moncler Genius in 2018, a series of drops and capsules with designers ranging from Pierpaolo Piccioli to Simone Rocha and Craig Green, to name a few.

According to the Moncler Genius business model, each collection is released singularly through monthly projects, both physical and digital.

In February, Ruffini revealed the new chapter of the Moncler Genius included a collaboration with JW Anderson, a suitcase with Rimowa and an e-bike with Mate.bike. In addition to Fragment Hiroshi Fujiwara, the 2020 lineup also comprises: Sergio Zambon and Veronica Leoni for 2 Moncler 1952; Sandro Mandrino for 3 Moncler Grenoble; Simone Rocha; Craig Green; Matthew Williams of 1017 Alyx 9SM and newly tapped creative director of Givenchy; Richard Quinn, and Poldo Dog Couture.