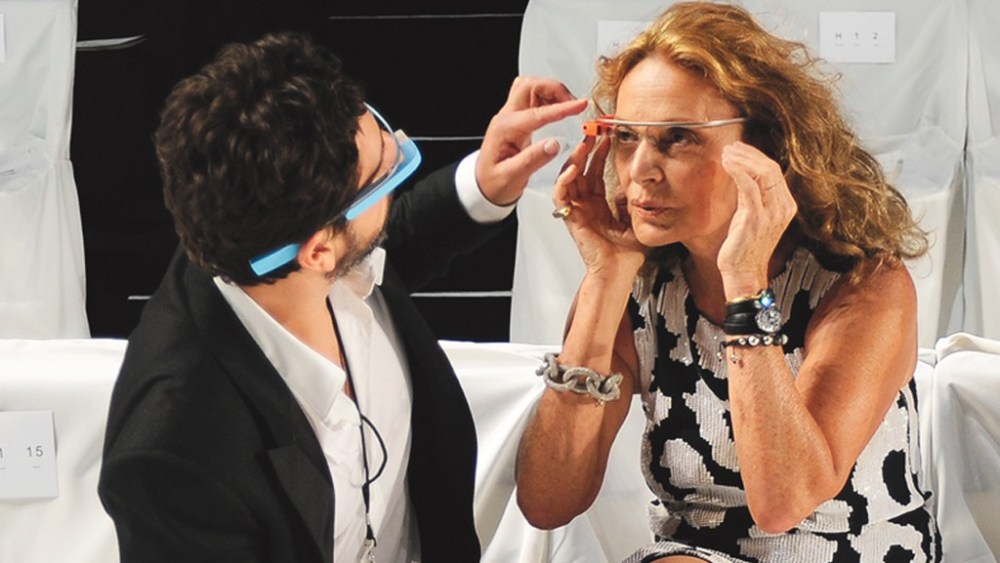 That bearded man taking a bow with Diane von Furstenberg at her spring show Sunday was none other than Google cofounder Sergey Brin.

And the quirky, half-glasses that they were wearing? Glass by Google — a new technology that brings the digital world to the user and tries to stay out of the way.

Models took to the runway sporting the peculiar, lightweight invention that allows for hands-free recording, photo viewing and a host of other functions.

Brin may be the world’s 24th-richest person with a fortune of $18.7 billion, but this is the first time he’s shown up on the fashion radar and the crowd largely didn’t recognize him among the crowd’s other boldfaced names including Sarah Jessica Parker, Andy Cohen, Oscar de la Renta, Fran Lebowitz, Valentino and von Furstenberg’s husband, Barry Diller.

Backstage, hordes of fashion press and industry types clamored for a shot of Parker and Cohen. The trim, neatly dressed Brin — who wore an Alexander McQueen blazer with a white shirt over dark Acne jeans — stood somewhat apart, fielding questions from only a few reporters.

“It’s been under development for over two years now, and the goal is to really connect you to digital life without really taking you away from real life,” Brin said. It looked like he was wearing a pair of sporty blue-and-gray sunglasses without the lenses.

High fashion it’s not, but Google’s effort to make a world of semicyborgs is relatively unobtrusive with just a small square glass piece that hangs in front of the wearer’s right eye and functions as a screen.

“You can [record] video, still [images], get text messages — reply to them and things like that,” Brin said. “We have hundreds of ideas, we just only have so much time to implement them now.”

The device, which will sell for something less than $1,500, will likely include navigation functionality and photo capabilities when it hits the market next year.

Google spent the last week capturing DVF’s creative process with the glasses and a short film, “DVF Through Glass,” will be released Thursday on the designer’s Google+ page and Google’s YouTube channel.

It’s nothing new for brands from outside fashion to try to capture some of the industry’s glamour and luster to get their message across — just look at the slew of stalls set up inside the tents at Lincoln Center.

Google is a case apart, though, with a big enough share of the spotlight, all the financial resources a company could want and direct connections with consumers to promote new products. But with Glass, Google is trying to reach beyond its core.

“I think it’s not just about technology,” Brin said. “It’s about lifestyle.”

He hopes to make more fashion connections in the future. “It’s a very important component of making technology desirable and compelling,” Brin said. “It’s got to be stylish and fashionable.”

The 39-year-old executive said he’s been focusing on Glass, but that there are other things in the works that could intersect with the industry.

“There are many, many projects at Google where we’ve been really focusing on beauty and getting that going,” he said, declining to be more specific.

In many ways, Google and DVF are a natural fit. Both are known for their willingness to experiment. And the tech titan and the fashion mainstay seem to have hit it off.

“We were at a conference together and we were testing out a prototype,” Brin said of the collaboration. “I talked about it to her and she loved it. We thought about it. It’s really a perfect combination. What we really have been going for is style and comfort, and I can’t really think of a brand that signifies that better than Diane’s.”

For someone just making his entre into fashion, Brin seems to have the talk down already.