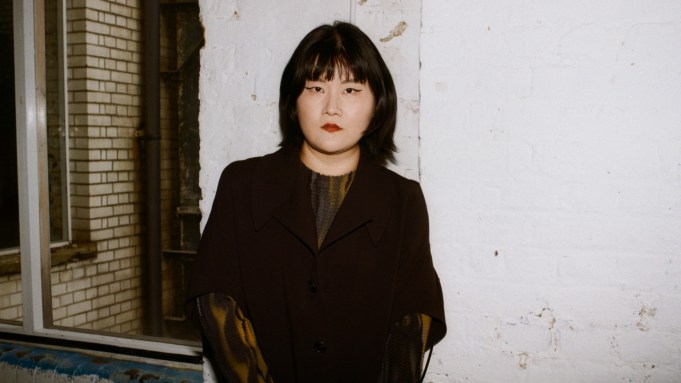 LONDON — South Korean fashion designer Goom Heo, who was shortlisted as one of the 19 semifinalists for this year’s LVMH Prize for Young Designers, doesn’t care how the industry categorizes her works.

Her edgy, subversive, and genderless designs, made mostly by draping directly on the body, were a hit among the London fashion crowd after she won her second L’Oréal Professional Award for her MA graduation collection.

She was the first student in Central Saint Martins’ history to be awarded the top prize twice. She first bagged the honor in 2017 with her BA graduation collection.

Lulu Kennedy made her an offer to join the young designer support program Fashion East shortly after her graduation.

She showed with Fashion East for four seasons, from fall 2020 to spring 2022, mostly digitally due to COVID-19. Things became more challenging as she was stuck in South Korea until last October due to the pandemic after she traveled back there for denim production.

“I was only planning to go back for three weeks but I couldn’t come back because my flight was canceled so many times. Also, COVID-19 was getting very serious there, so if I go back to London, I had to quarantine. So I decided to stay,” Heo explained during a Zoom call.

Reconnecting with her culture during that time allowed her to see how much of her gender-fluid design was unknowingly influenced by K-pop, as well as cartoons and gaming. Even on the surface Korean society draws a very clear line between men and women, the designer said.

Now that she is back in London with a fall collection that further exemplifies her gender fluid and out-of-the-box take on men’s fashion, plus an LVMH Prize nomination, Heo believes that she is ready to get back to the game in full force, regardless of whether she makes it to the final round of the LVMH Prize.

She also revealed that she plans to showcase independently during the men’s fashion cycle from June in London to establish a stronger relationship with buyers.

“For me, it doesn’t matter if I get into the final or take the big prize. Getting the LVMH Prize nomination is already a huge recognition. It gives me 200 percent motivation to do my next collection,” she said.

The pieces Heo took to the LVMH Prize showroom were from her fall 2022 collection, “Infinite Glacier,” which featured sculptural puffer pieces, shorts with XL fur pockets, a fitted jacket with embroidered lapels down all the way to ankles, and statement boots with 3D printed oval buckles, which Heo hopes can become a signature for the brand, seen both on male and female models.

“It really doesn’t matter what gender I am designing for. It’s the customers who are deciding what kind of clothes they are wearing, instead of me,” Heo said, adding that while some buyers did get confused at the beginning, the kind of stores that appreciate her aesthetics, such as London’s Machine-A and H.Lorenzo in Los Angeles, had no problem selling her designs in the end.

Despite the attention, Heo’s journey in fashion hasn’t been easy. Similar to many Asian students, Heo’s parents were furious at the beginning when she told them that she was going to study fashion.

“I was supposed to be an interpreter between Chinese, English and Korean. I went to the United States for that. During the half-term in my senior year, I watched this documentary about the world’s best three fashion schools, and Central Saint Martins was one of them. After that, I just decided that I wanted to do fashion. I quit my high school for that and my parents were super mad, but later I got into the foundation course. So that’s how I started,” Heo recalled.

The fact that Heo was never professionally trained as an art student like the majority of the rest gave her the freedom to design in her own way, which mostly involves draping the garment directly on mannequins, instead of drawing patterns first.

“I can’t draw. I am still not confident about that. I always tell my interns: ‘you just have to see how I drape,'” she said.

“But I have this amazing pattern cutter, who has been working with me since my B.A. collection for seven years now. He understands me and he is the one who made me realize that I don’t have to work the traditional way. I can break all the rules and not care about whether it’s for men or women,” she added.