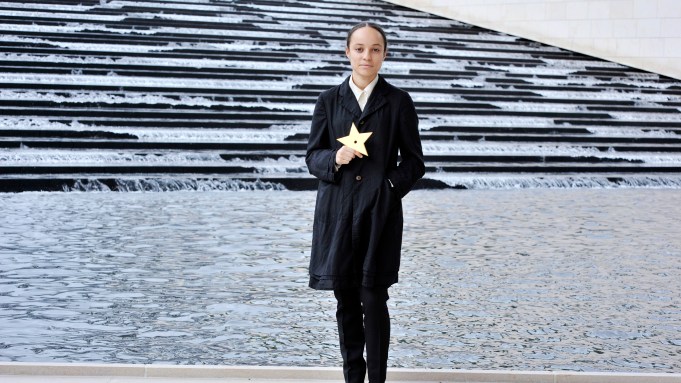 “It was quite unanimous. I love her vision,” said Nicolas Ghesquière, creative director of women’s collections at Louis Vuitton, who shared jury duty with the likes of Karl Lagerfeld, Marc Jacobs, Givenchy’s Riccardo Tisci and Céline’s Phoebe Philo. “The clothes are really well made also. Her universe is very strong.”

“I think she has something very interesting to say, and it feels like she has a lot more to say,” added Philo, describing clothes that practically narrate Wales Bonner’s upbringing in southeast London, raised by a Jamaican father and an English mother. “I went to school with girls like Grace. You can see she’s figuring that out through her fashion.”

Philo said Wales Bonner, 25, recounted her background and political viewpoints during her 10-minute presentation. The 2014 graduate of Central Saint Martins said her work explores representations of black male sexuality and identity, which she backs up with research spanning critical theory, literature and history.

“Her clothes are great. Everyone felt that women want to wear that stuff and it’s men’s wear,” Philo said of prim tailoring with an empire flare and silky shirts and pants, the collars and waistbands dabbed with crochet.

While her clothes are already carried in stores including Matchesfashion.com, LN-CC, Joyce, 10 Corso Como and Ssence, Wales Bonner operates her business with only one other collaborator.

She is to receive a grant of 300,000 euros, or $336,525 at current exchange rates, plus a year of coaching from executives at LVMH Moët Hennessy Louis Vuitton, the world’s largest luxury group and sponsor of the prize.

The petite designer told WWD she would use the prize money to “build out her team” and use LVMH coaching to “figure out how I can scale the business up.”

Actress Léa Seydoux, poured into a tight black dress with an asymmetric hem, handed Wales Bonner a gold star trophy during a brief ceremony at the Louis Vuitton Foundation, a Frank Gehry-designed art museum on the leafy fringes of Paris now decked out in colorful panels courtesy of artist Daniel Buren.

Wales Bonner beat out seven finalists. They were Tuomas Merikoski, the Finnish designer behind the women’s wear label Aalto; Glenn Martens, the Belgian behind men’s and women’s collections for Y/Project; Christelle Kocher, a French designer who creates her Koché collections for both genders; Hiromichi Ochiai, based in Tokyo and designing under the Facetasm label; Matthew Williams, whose women’s wear carries the Alyx label; Brandon Maxwell, who has a signature women’s line, and Canadian wunderkind Vejas Kruszewski, 19, who makes collections for women and men under the Vejas label.

Kruszewski was handed a special jury prize, which comes with 150,000 euros, or $168,260, and one year of coaching. Ghesquière noted he and other jurors were dazzled by the youngster’s accomplishments – and steely determination.

Launched in 2013 and spearheaded by Delphine Arnault, a key talent scout at the luxury group her family controls, the international competition is open to designers under age 40 who have presented and sold at least two collections of men’s or women’s ready-to-wear.

About 1,000 designers threw their hats into the ring this year, applying for an honor that has boosted the careers of Thomas Tait and Marta Marques and Paulo Almeida, the Portuguese duo behind the Marques’Almeida label — the first two winners of the grand prize — along with Hood by Air’s Shayne Oliver, Simon Porte Jacquemus and Nikita and Tina Sutradhar for Miuniku, recipients of special prizes from LVMH, parent of fashion houses including Fendi, Givenchy, Berluti, Loro Piana and Kenzo.

Maxwell pointed to a swollen eyelid behind his Céline eyeglasses as an indicator of a high stress level, tinged with excitement. Using frequent-flyer points, he flew in his mother, Pam, from Longview, Tex., and dressed her in one of his sculptural jackets.

“She got her first passport. I’m taking her to the Eiffel Tower later to take her picture in front of it,” he said.

Echoing other finalists who stood by racks of their designs in the museum’s soaring auditorium, Maxwell said the competition brought invaluable exposure to all participants.

“It’s helped us very, very much. Oftentimes when you just start out, it’s hard to get people to look at you,” he said. “I feel like the response has just been great.”

The atmosphere grew increasingly electric as the famous jurors filed in, embracing each other and falling into conversation about the judging task ahead of them.

“We always get into a heated debate over lunch about what the criteria is for giving this prize. I guess it’s just what you like the most in the end,” Jacobs shrugged.

Philo confessed she is often swayed by personality, commending the young talents for making their presentations before the 10-minute buzzer goes off.

“I think the most important thing is originality. I like the ones that are taking a risk. Business? You have all the time to build it,” mused Tisci. “Today, you need to not only sell clothing; you need to sell a dream. You have to forge an identity. It’s different today for designers than even 10 years ago.”

“It has to be an original standpoint – and have a business structure behind it,” countered Anderson, who designs the J.W. Anderson and Loewe labels under the LVMH umbrella. “It’s a balance between creativity and business acumen.”

Asked if he judges the clothes themselves or the concept behind them, Lagerfeld retorted: “A good idea poorly done is worth nothing.”

But like Philo, he said he battles objectivity. “My problem is there are people that I like and I’m influenced by that,” he said.

For example, he knows Kocher well as artistic director of Maison Lemarié, a maker of feathers and flowers owned by Chanel through its subsidiary Paraffection. “She’s a divine person, very gifted,” he said.

“Validation” was a word finalists used repeatedly, lauding the prize for spurring them on in a competitive field.

“It gives a lot of confirmation,” said Martens, standing by a rack of urban basics tinged with Elizabethan grandeur that included a pair of jeans so long that the pant legs coiled on the floor like snakes. He explained the they could be turned up to the hipbone, or scrunched around the calves.

Participating in the prize can also help boost business. “We multiplied the sales by four last season, and we got a lot of exposure in the press,” Kocher smiled.

“The vision is really important,” said Delphine Arnault. “The product needs to be really special, and really stand out because there’s tough competition. It’s also important how they foresee the future.”

The executive stressed most of the participants are hungry for coaching.

“The designers always have so many questions about how to best produce their collections and develop their business,” she said. “It’s one of the big assets of the prize.”

Arnault also handed out 10,000 euro ($11,145) scholarships to three fashion graduates, who each get a one-year post in the design studio of a fashion house at LVMH. Their schools also pocket a like-value grant. The winners are: Francesca Ricchiardi from Accademia Costume & Moda in Rome, Ayo Keys from Parsons The New School of Design in New York and Beth Hall from Westminster University. They will be placed at Fendi, Marc Jacobs and Loewe, respectively.