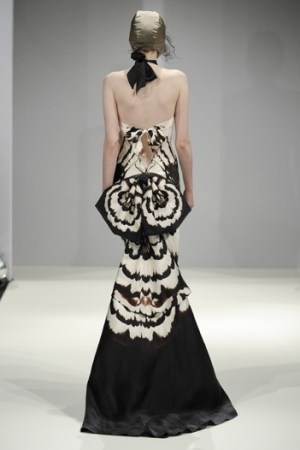 London designer Maria Grachvogel has developed an unusual process that uses software to marry intricate, placed prints with bias-cut silhouettes. The eponymous line, known for its flowing eveningwear and pants without side seams, has been worn by the likes of Angelina Jolie, Marie Helvin and Yasmin Le Bon.

Grachvogel’s Dali dress shows the effects she can create. Commissioned by the Dali estate, the gown is one piece with one seam up the back, although the print makes it appear as though the dress could be made of many little pieces stitched together.

“I was inspired by [Salvador] Dali but I didn’t want to do anything too literal,” said Grachvogel. “He’s known for surrealism, my designs are about the body.” So she thought of a skeleton turning into tree roots. “It suggests themes of fertility and womanliness,” she said.

Without the software, it would be impossible to precisely place such an intricate print around the back and sides of the dress. Both the print and the pattern have to be graded for each size. Although the process is automated, it is still laborious, and each style is produced in limited quantities. (Only three Dali dresses were made.)

Grachvogel usually begins by sketching her idea on paper. “Ninety percent of the time I don’t have a fixed idea in mind,” she said. “I haven’t sketched it out. I don’t know the colors. I do know the effect I want to create. I see something visually in my mind and start to paint it, and if I don’t like what I’ve done, I start over.”

Once the idea is complete, she creates the pattern on Lectra’s Modaris, then virtually paints the print directly on the virtual pattern pieces using Lectra’s Kaledo.

It took Grachvogel five days to paint the design for the Dali dress on the pattern. “I was painting on the equivalent of 5 meters of fabric for that dress. It’s a lot of painting.” A less intricate top might take a day.

When Grachvogel is done, the print and the pattern pieces are both printed out at the same time directly onto the fabric. An outside company does the printing using a digital printer for fabric.

The tricky part is making sure the prints come out on grain and on register, and stay that way through the washing and finishing process.

The pieces are sent back to Grachvogel to check for fit and registration. The technique requires such precision that 20 to 50 percent of the fabric is thrown away for some designs.

Once the sample is made, the company does the print grading. “It requires a slightly longer lead time, but gives a very special result,” she said. Then each garment is cut and sewn one by one.

About a decade ago, Grachvogel briefly employed a patternmaker, but she found making the pattern was an integral part of the creative process, and now she makes all the patterns herself. (Staff help with related tasks such as marking and grading.)

The company does not employ a fit model, either, but tries samples on five size-10 women with different body shapes. The line is known for its flattering fit, and the bias cut of most of the garments makes them adapt easily to a wide variety of body shapes.

“Fit and cut are so important to the core of the brand,” she said. “That’s one thing the programs have helped with.”

The label has one store, on Sloane Street in London, and is carried in a handful of boutiques around the world, including Italy and Saudi Arabia. Retail prices range from about 100 pounds, or $150 at current exchange, for an accessory to 400 pounds, or $600, for pants to 3,000 pounds, or $4,500, for a couture dress.

Plans are in the works to expand into printed swimwear, furniture, bags and shoes. Grachvogel also plans to adopt Lectra’s Modaris 3D Fit, which will cut down on samples by virtually draping a pattern on a 3-D model.

Grachvogel has been designing clothes since she was 14. In 1994, she started the firm, which has revenues of less than 1 million pounds, or $1.5 million, a year. She started using the Lectra software in 2001.