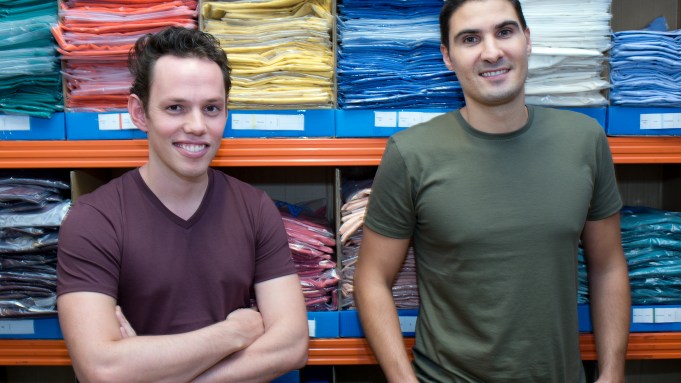 Hong Kong — Fashion e-commerce startup Grana may be based in Hong Kong but its founder Luke Grana is an Australian and the line, which sells premium quality wardrobe staples, was conceived on a visit to Peru.

The label only gets more global from there. Its fabrics origins read like a UN roll call: French poplin, Japanese denim, Mongolian cashmere, Chinese silk, Peruvian pima cotton. The online-only brand promises to traverse the world in search of the best materials. And in a model not unlike Bonobos or Everlane, it uses the Internet to cut out the middleman and passes the savings onto the consumer.

The concept came when Grana traveled to Peru to see his brother and discovered pima cotton, a variety known to be exceptionally durable and absorbent. He became inspired to launch a brand that would provide a remedy to the Millennial customers’ fast-fashion fatigue and use the internet to deliver it.

“There are really amazing stories of fabric origins. After a bit of research, I found that there are a lot of people that just buy mass-produced Chinese fabrics,” said Grana.

It’s his first foray into fashion but the serial entrepreneur, whose previous ventures included electric vehicle charging infrastructure, a Webcam coaching platform and two cafés, initiated himself into the apparel world by reading up on trade journals, reaching out to well-known fabrics mills and he even took on retail stints at French Connection and Zara.

When he started studying Asos, he realized that there were large inefficiencies with their business model. “I saw that they’d opened up shipping to 200 countries but they were doing everything out of their warehouse in Hampstead,” Grana said.

Grana felt he could cut down those costs significantly by moving to Hong Kong to launch the brand, which he did last year. Besides being a tax-free port, the city serves as a convenient sourcing hub and its place as the world’s third largest logistics center meant competitive shipping rates.

In Hong Kong, he met Pieter Paul Wittgen, who left a career as a bank consumer and retail analyst to join the startup. The two initially sold 2,000 shirts to their friends,  and they’ve continuously expanded since then picking up $2.5 million in funding and attracting investors like the Bluebell Group.

Now Grana ships to 10 markets and their team of over two dozen is steadily working on adding locations.

“We’ve got a big product roadmap, adding a lot of products Irish linen and French poplin, Mongolian cashmere and Merino wool and sweaters,”  Grana said. “Basic underwear, socks and sportswear by the end of the year.”

The company will go from 50 styles to 150 styles in the second half of this year. Over time they want to become “the next online Uniqlo,” except for even better quality, Grana said. He declined to disclose sales figures for the company.

Pop-up stores are already running in Hong Kong and Singapore. In September, the company will launch one in Sydney and another in San Francisco come November.

One thing the company is not playing up for the time being is its proximity to the Mainland Chinese market. It doesn’t identify as a Hong Kong brand, or even an Asian one — and is pursuing the U.S. and European markets first.

“The U.S. is currently our second-[largest] market,” Wittgen said. “Over the next year, that is going to be our core market where we’re going to have a lot of our focus, with a lot of marketing activations.”

“I think it definitely would help when we go to China if we’re established in the U.S.,” Wittgen continued. “Hong Kong is interesting because it’s close to China but our audience is very international. Hong Kong is an ideal test case for us. I do think that establishing our brand in U.S., Europe, Australia will help later entering China or Southeast Asia.”

Golden Gate Ventures’ Vinnie Lauria, an investor in the company said, “I look at them as an Australian brand. I think as a company they haven’t completely sunk into that yet. They’re a startup. What I love about this world is that you can figure it out.”

Neither Grana nor Wittgen may have a straight fashion background but they say it’s an advantage to the way they approach the business.

“As much as a fashion brand, we’re a logistics brand. This is how Zara sees themselves or H&M,” Grana said. “This is what we wanted to get right from day one which will allow us to scale quickly. I think this is why investors believe in Grana, because of the scalability of Hong Kong shipping to a global market.”