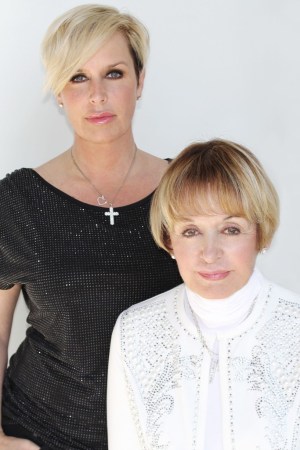 LOS ANGELES — Marie and Kelly Gray, the mother-daughter duo and former head designer and chief executive officer of St. John, respectively, have launched a new company called Grayse. The casual luxury line, retailing between $200 and $1,100, will be introduced at Neiman Marcus and Saks Fifth Avenue on Feb. 1.

Marie and her husband, the late Robert “Bob” Gray, founded St. John in 1962, growing it into one of the largest global brands in Southern California, while Kelly became its ceo and the face of its iconic print ads.

Bob retired in 2002; Marie and Kelly stepped down from their day-to-day roles in 2005 and have acted as consultants at St. John since 2007. Marie continues to sit on the board and the family retains a minority stake in the privately held company.

In the years since leaving full-time jobs at St. John, Kelly founded the lifestyle label Royal Underground with Nikki Sixx, bass player for Mötley Crüe and Sixx:A.M. She decided to step away from the line when she started Grayse, while Sixx will continue with Royal Underground.

Meanwhile, Marie was spending most of her days on the golf course. But she never lost the design bug and found herself becoming more involved in her daughter’s line. The seeds of a new company took root when mother and daughter realized how much they enjoyed working together again.

“The minute we started bouncing things off each other we go kinetic, like we have a combustible energy,” said Kelly, who added that their aim to do design is something “completely different from St. John.” To that end, there is not a single knit piece in the collection. The focus is on separates, with tops and dresses featuring high-tech embellishments, laser-cut Italian leathers and innovative woven fabrics.

“I’ve always loved a sequin,” said Kelly, “but there have been so many advances in technology. I spent a lot of time in Asia sourcing heat epoxy transfer stones and other treatments.” The results are studs that look like Lucite and thin metal plates that look like patent leather, giving the classic shapes a modern sparkle.

The line, which sits in what Kelly calls the “fun luxury” price point, “presents as a special occasion line but is not necessarily eveningwear or red carpet. It’s more event dressing for book parties, luncheons, pool parties. There are no more rules of what to wear here and there anymore.”

While the Grayse woman likes glamour and sex appeal, there are no head-to-toe gold looks here. Styles range from a pink embellished minidress to a gold short-sleeve leather jacket paired with a studded mesh tank and softly tailored dark tan shorts. “It doesn’t have to be loud because it’s full of rich textures and colors,” said Marie. “We think this will appeal to some customers we’ve known and we hope to meet some new ones.”

To that end, the Grays, who were known for their personal approach with customers that earned St. John a cult following, plan to build the same type of relationship, beginning with their retailers.

“We intentionally kept this under wraps since starting it last summer,” said Kelly. “We wanted to strip it down to the dirt and work our way back to the customer starting with the retailers. Until now, they’ve only gotten a few photos, and this month we are doing sales associate breakfasts across the country. We are old school in that we recognize your sales associate is your direct line to the customer and if they get your message, it can be conveyed seamlessly.”

“We’re having a good time,” said Marie of coming out of semiretirement to work with her daughter again. There’s now a greater appreciation for one another’s talents.”

“I can’t imagine the torture I put Mom through when I was learning the business and thought I knew what I was doing when I didn’t,” said Kelly.

In addition to Neimans and Saks, the line will also sell on mkgrayse.com. As for future Grayse stores, “The aesthetic side of me says yes and the business side of me says, ‘Hell, no.’ I remember how hard it is to make money at them so I’m not sure,” said Kelly.