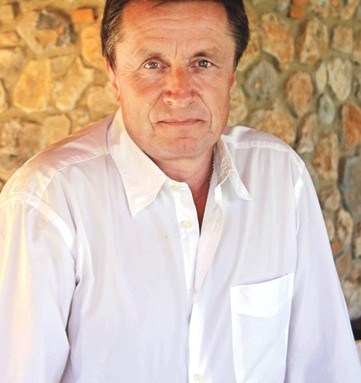 With his soft-spoken way and carefully chosen words, Gianluca Brozzetti is yin to Roberto Cavalli’s yang.

Brozzetti, who joined the company as its chief executive officer in September 2009 from Finnish yacht builder Nautor’s Swan, is a well-respected luxury goods cognoscente, with previous executive roles at Asprey, Bulgari, Gucci Group and Louis Vuitton.

“I needed him next to me,” said Cavalli. “We are both headstrong, but I am more instinctual, and he helps me to reflect on things. And often, I end up telling him he was right.”

Cavalli praised Brozzetti’s hardworking ways, and lamented “losing so much time with the funds” — time, he said, that could have been saved if the executive had been on board earlier.

Cavalli abandoned plans to sell a 30 percent stake in his business to Italian private equity firm Clessidra SGR SpA last year after disagreeing over the price. Brozzetti was a consultant for two years during the negotiations with Clessidra. Previously, in 2006, Cavalli seemed to be close to a deal when Saudi Arabian private equity fund SAB capital submitted a bid for 60 percent of his business, but the designer pulled out of the talks.

“In the past, Cavalli had been trying to partner with private equity funds, but that did not lead to anything,” said Brozzetti, who described the company’s growth from the end of the Nineties to the Aughts as “fast and tumultuous.” While it celebrates its 40th year in business, it is mainly over the past two decades that the company expanded globally, through its own network of stores and a differentiated product offer.

But that is history, and Brozzetti is looking at the years ahead, intent on further building the firm, which he described as “a beautiful, solid company, with a lot of potential and [facing] new challenges.”

Upon his arrival, he said he “found a company with several things to do and arrange after the rapid growth of the past few years.” Brozzetti noted the firm has defined and agreed on a three-to-five-year expansion plan and that he expects a “10 to 15 percent compound annual growth in the coming five to six years.”

The executive, flanked by former Procter & Gamble finance director Carlo Di Biagio as Cavalli’s new chief operating officer, said management has been focusing on the company’s core business, bringing a more disciplined approach and streamlined strategy. Case in point: the designer’s personal activities, such as the clubs or his airplanes, were spun off, and non-strategic businesses, like fabric printing plants that were not working with Cavalli exclusively, were dismissed.

“We went from 27 legal companies to seven,” said Brozzetti, referring to the Roberto Cavalli SpA holding entity. The designer himself is president of the group.

Dollar figures were converted at average exchange rates for the periods to which they refer.

Wholesale and retail sales each grew in the first half, compensating for a drop in royalties from its Just Cavalli licensee Ittierre SpA, which has been in government-backed bankruptcy protection since February 2009. In particular, sales in directly owned stores jumped 27 percent in the first half this year.

Brozzetti identified both 2009 and 2010 as “difficult years after the recession” and said he sees business “somewhat picking up, but we need to be cautious because the crisis is not completely over.”

Last year was significantly penalized by Ittierre’s financial troubles. The manufacturer also produces apparel collections for Galliano, C’N’C Costume National, Ermanno Ermanno Scervino, GF Ferré and Extè. Its state-appointed administrators put Ittierre up for sale this summer, together with the Gianfranco Ferré brand, also controlled by IT holding. Malo, which was under the same umbrella, was sold to Tuscan luxury retailer Evante in July. Brozzetti said the Just Cavalli line is “very important” and defined Ittierre as the company’s “historical partner.”

“We did great things together and Roberto Cavalli felt he had the moral obligation to support the process and give it continuity,” Brozzetti said, noting he is closely monitoring Ittierre’s developments. The contract is valid until the end of 2014.

“I hope for the best, but, if things should not work out, Ittierre gives us the possibility to find other alternatives,” he said.

“It is well known that we are strong in women’s ready-to-wear, but there are still many opportunities in leather accessories, shoes and perfumes,” he said. In July, the company signed a license with Coty Prestige for the Roberto Cavalli and Just Cavalli brands that will take effect next July, when the designer’s fragrance license with Italian beauty firm ICR-ITF expires. The company also holds licenses with Morellato SpA for watches, with Marcolin SpA for eyewear, with Albisetti SpA for underwear and with Simonetta SpA for the children’s Angels, Devils and Newborns line.

The company is also growing geographically, with a strong base in Italy, in the Middle East and Eastern Europe. Brand awareness in America is strong, but Cavalli plans to develop that market, according to Brozzetti.

“We have a fantastic name in the U.S., but a small business there, so that’s an opportunity for growth,” said Brozzetti, who tapped former Asprey and Bulgari executive Robert Donofrio to the new post of ceo of its U.S. subsidiary in January.

“We have stores in major cities but we also want to strengthen our business in department stores,” he said.

In the U.S., the brand is available at 76 doors of prominent specialty stores like Bergdorf Goodman, Saks Fifth Avenue, Neiman Marcus and Nordstrom and in more than 30 smaller specialty retailers. Despite the economy last year, Cavalli continued to invest in retail, opening, among others, an expansive flagship on Paris’ Faubourg Saint-Honoré in March 2009 and, in December, a 10,000-square-foot unit at the Crystals at CityCenter in Las Vegas.

Other stores in the U.S. are located in New York; Bal Harbour, Fla.; Dallas; Beverly Hills, and at South Coast Plaza in Costa Mesa, Calif. Brozzetti said he has seen business advance in the U.S. since the beginning of this year.

“In the future, our stores will include a larger assortment of all Roberto Cavalli products including ready-to-wear, handbags, shoes, watches, eyewear, fragrance — all our product offer,” he said.

There are now 60 Roberto Cavalli stores globally, and the company’s goal is to reach 100 over the next three to five years.

Brozzetti would also like to grow in Japan and the Asia- Pacific region, where the company opened two branches, in Hong Kong and Tokyo, two years ago.

In Japan, there are now four shops in key department stores Takashimaya and Daimaru. In Asia, besides the Hong Kong store, there are two shops in Taiwan and a unit each in Indonesia and Taipei.

A second store in Hong Kong is due to open within the next two years.

Last November, the company also opened its online store, powered by Italian e-tailer Yoox Group. This has “the same value as a large store on the street,” said Brozzetti.

The executive also said the company is intent on building its lifestyle component. In 2001, Cavalli made the iconic Caffè Giacosa in Florence a part of his boutique, followed in 2002 by a Just Cavalli Café, with a steel bar designed by architect and sculptor Ron Arad, in Milan’s famous Branca Tower, which was designed by Giò Ponti in 1933.

In 2008, the designer unveiled his first Cavalli Club in Florence, in the city’s central Piazza del Carmine, in a 15th-century deconsecrated and restored church. Last year, a Cavalli Club opened in Dubai, covering two floors and 27,000 square feet, with black quartz floors and crystal dust. Brozzetti said the company is negotiating three more clubs over the next three years, targeting areas in Asia-Pacific, Eastern Europe and South America.