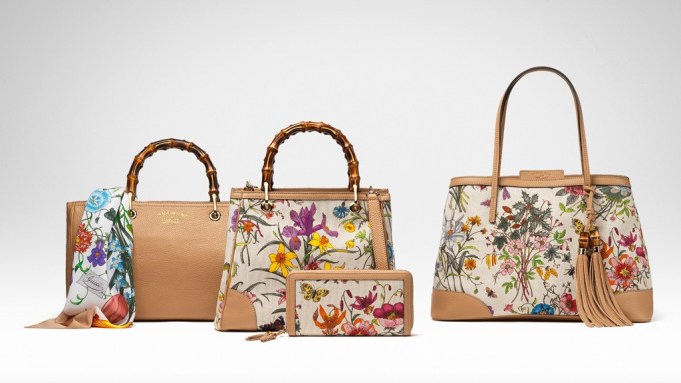 TOKYO — This year marks the 50th anniversary of Gucci opening its first store in Japan — a Ginza boutique whose debut coincided with the 1964 Tokyo Olympics — and the brand is planning a series of celebratory projects that include a limited-edition Flora collection and charitable initiatives.

Gucci creative director Frida Giannini will travel to Japan in October, making her first visit to the country in four years. While in Tokyo, she will present her spring 2015 collection to editors and clients through private appointments. She and Gucci president and chief executive officer Patrizio di Marco will also host a dinner honoring UNESCO.

The Italian house has ties to Japan dating as far back as the Forties, when it started importing Japanese bamboo for its handbag handles. More recently, Gucci and other luxury labels have enjoyed a rebound in the Japanese market for luxury goods after many years of stagnating demand. Gucci, part of Kering, saw third-quarter comparable sales in Japan jump 10 percent in an otherwise lackluster three months for the brand. Overall, sales fell 5.4 percent to 865 million euros, or $1.15 billion at average exchange for the period.

Di Marco, who lived in Japan for several years in the early days of his career, said he is encouraged to see a pickup in the country’s overall economy and he sees that positive momentum continuing, particularly in the build up to the 2020 Summer Olympics in Tokyo.

“[This trend is significant] considering you have this sense of optimism after 20 years of stagnation, deflation and everything Japan has experienced.… People’s mind-sets account for a lot. The pocket is important, but this is even more important,” he said, gesturing to his head.

Di Marco expressed some caution on an upcoming sales tax hike — Japan’s tax will jump from 5 percent to 8 percent in April — and the impact it might have on Japanese consumers. But he said it’s important to keep things in perspective.

“I’m concerned about the tax increase, but…for years the concerns [about Japan] were so many and so significant that this becomes something easier to digest,” he said, adding that he’s hopeful that Japan’s economy will stay strong and consumers’ optimism will continue.

The executive said Japanese consumers have been quick to embrace Gucci’s strategic shift toward upmarket leather goods and away from logo fabric bags and accessories.

“We are 50 years old. We have learned from mistakes. The important thing is that at 50 years not to make any more,” he said.

Leading up to Giannini’s visit, Gucci has several events and projects planned to underscore its commitment to the Japanese market and emphasize the brand’s craftsmanship. Perhaps most notable of these, Gucci will launch a special capsule collection of Flora merchandise exclusive to Japan, including handbags, women’s ready-to-wear, silk, shoes and jewelry. These goods will bow at Tokyo’s Isetan in March and at stores elsewhere in Japan in April. Sales of a scarf from the collection will benefit a UNESCO- and Gucci-sponsored scholarship program. It retails for 47,000 yen, or $457 at current exchange.

Elsewhere, Gucci will reopen its renovated Aoyama flagship store in May. Lapo’s Wardrobe, a made-to-measure capsule collection from Giannini and Lapo Elkann, will make its Japanese debut at the store. The boutique opening will also feature an exhibit of Gucci Première couture gowns. In a bid to reach consumers at other stores, Gucci will stage artisan demonstrations at Isetan, Gucci’s Ginza flagship and Osaka’s Hankyu Umeda at various points from March through October.

In July, Gucci will sponsor former soccer star Hidetoshi Nakata’s charity gala dedicated to the “Revalue Nippon Project.” This will be the second time Gucci has sponsored the event, which promotes the preservation of Japanese culture and craftsmanship through a charity auction.