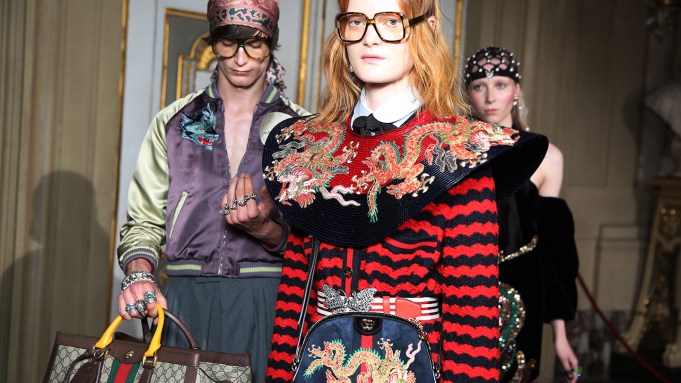 With that aphorism, Alessandro Michele summed up his Gucci cruise collection, shown at the Palatina Gallery at Pitti Palace here on Monday evening, which, to be sure, combined elements dear to the designer — his rich embroideries and decorations, as well as that edgy, cool factor that would not be lost on Sir Elton John, one of his front row guests, who wore a dark jacket with a dazzling sequined, multicolored lizard running down one side. 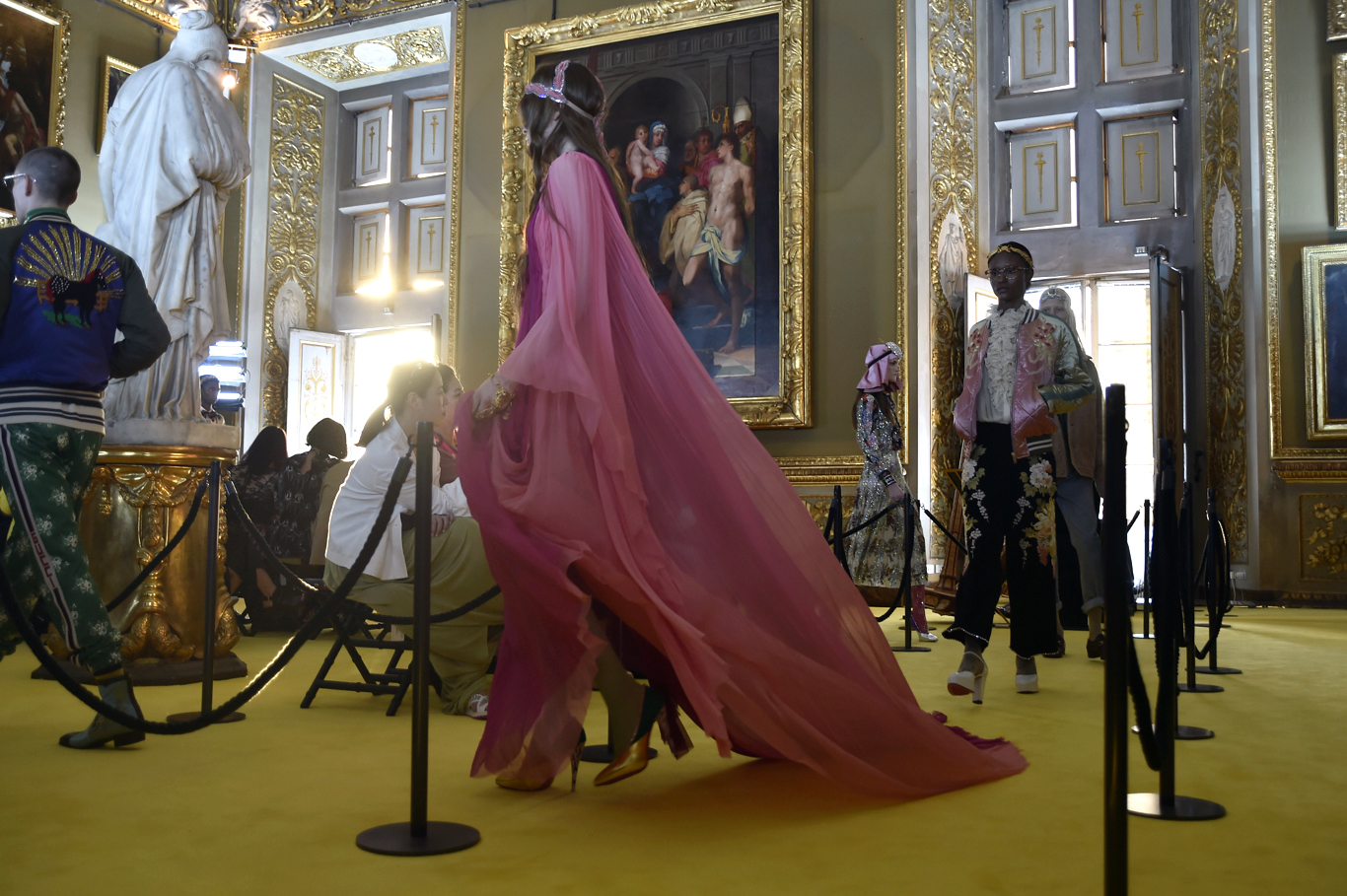 The location could hardly have been more fitting for the lineup as the frescoed rooms were brimming with masterpieces from the likes of Rubens, Tintoretto, Titian, Velázquez and Caravaggio and guests were able to make a special visit of the Uffizi Museum and the enclosed passageway Vasari Corridor. “I am always connected with the Renaissance a lot, that’s why I am connected with Pitti Palace,” explained Michele backstage after greeting François-Henri Pinault and Salma Hayek Pinault, who told the designer she felt this was his “best collection” so far.

“I was thinking of injecting some rock ‘n’ roll in the collection, thinking of faces like [Simonetta] Vespucci [known for her beauty and a model of Botticelli’s]. She was rock ‘n’ roll at the time.” To wit, one model wore her hair in a Venus-by-Botticelli-like fashion, and pearls and dainty laurel crowns framed the models’ faces as they walked in, say, a short brocade dress with a ruffled neck or a billowing pleated chiffon dress in different shades of pink. “I adore pink, it’s very powerful. It makes you feel sweet and sexy, also if you are a man,” mused Michele.

The designer continued to explore the fauna and flora themes that he has made his own — think roses on pleated gowns and a shirt with a naturalistic print of different fish worn by a male model. Singer Francesco Bianconi walked the runway wearing a suit with a tapestry print with red roses.

“At the beginning I was thinking of Greece and Athens but it was not possible, so I was thinking what was the most powerful place for that kind of inspiration,” said Michele of the failed attempt to show at the Acropolis and instead opting for Florence. “Everything started from the idea of the Mediterranean, the antique Greek and Roman culture, how it still transforms everything. The other big step was the Renaissance so I came here and it was the right moment for the brand, the company started here, what I am doing is closer to the city than at other moments of the company. Florence is still one of the most fascinating metropolises of the past. I adore the classical pieces of our culture, the Greek and Roman are still inside and everywhere, it’s impossible to disconnect. I feel very comfortable here.”

Offering an intriguing connection that was lost on some backstage, Michele compared Florence to Napa Valley and Los Angeles. “This place is not about the past, it’s like Napa Valley now, with everything happening.”

He emphasized how “the very beginning of European aesthetics started from Florence. Everything here was beauty, money and creativity, the power of the good money,” he said, referring to the influence families such as the Medicis had on culture and the arts. “It’s still fascinating, it’s still in our culture, still here.” 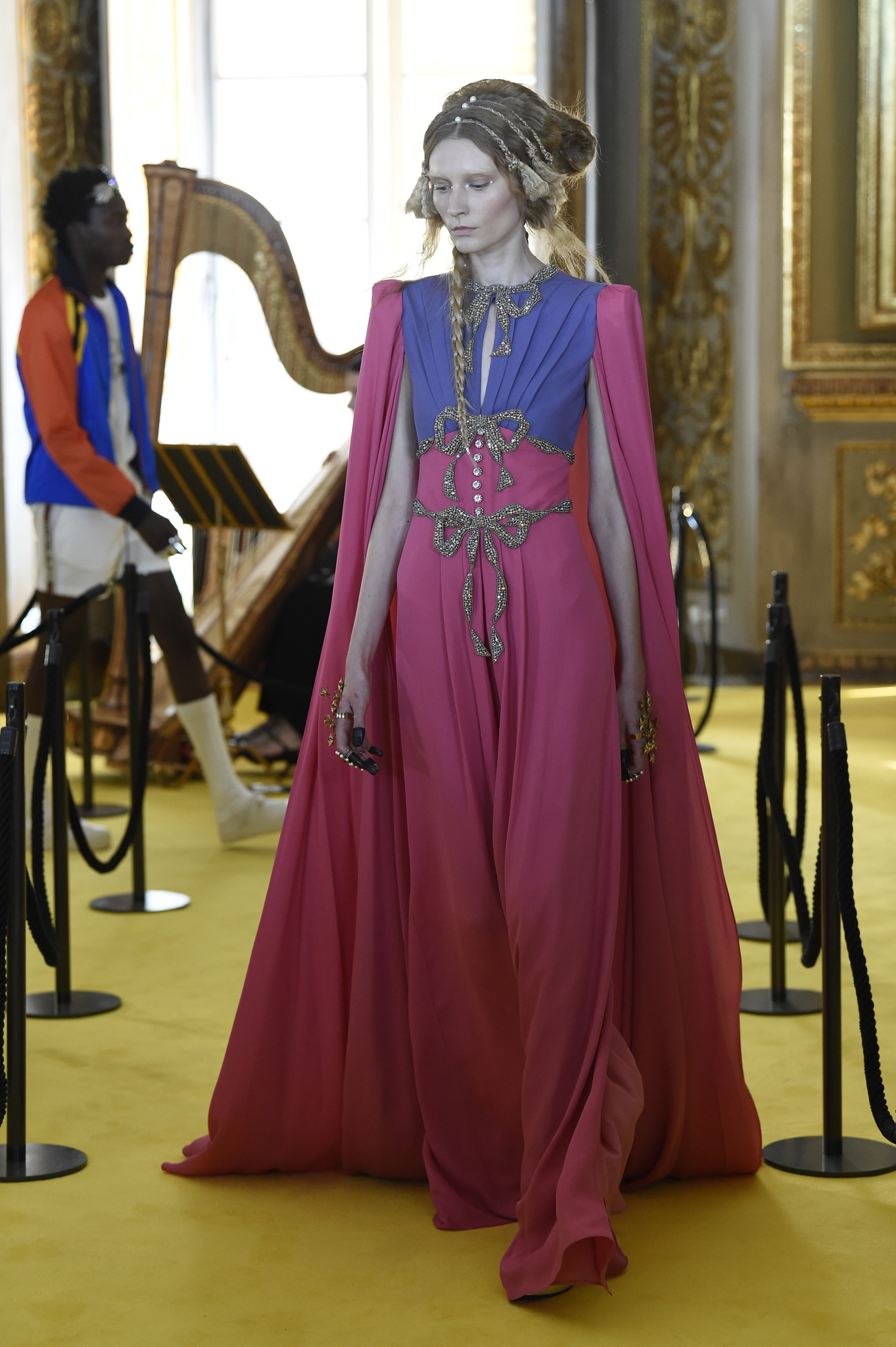 The designer continued to embrace his signature eccentricity, with vintage-looking jogging pants worn under ruffled shirts or a light burgundy matelassé coat with a green neckline and pocket details, for example. A dragon ran all around the stiff collar of a red and black jacket and on the front of a bag.  “Eccentricity is not by accident, it’s something that means you are trying to translate your point of view,  also something very simple, it makes you feel a rare element of the earth,” he said. Speaking of bags: The designer went large, with maxi-totes looking new. 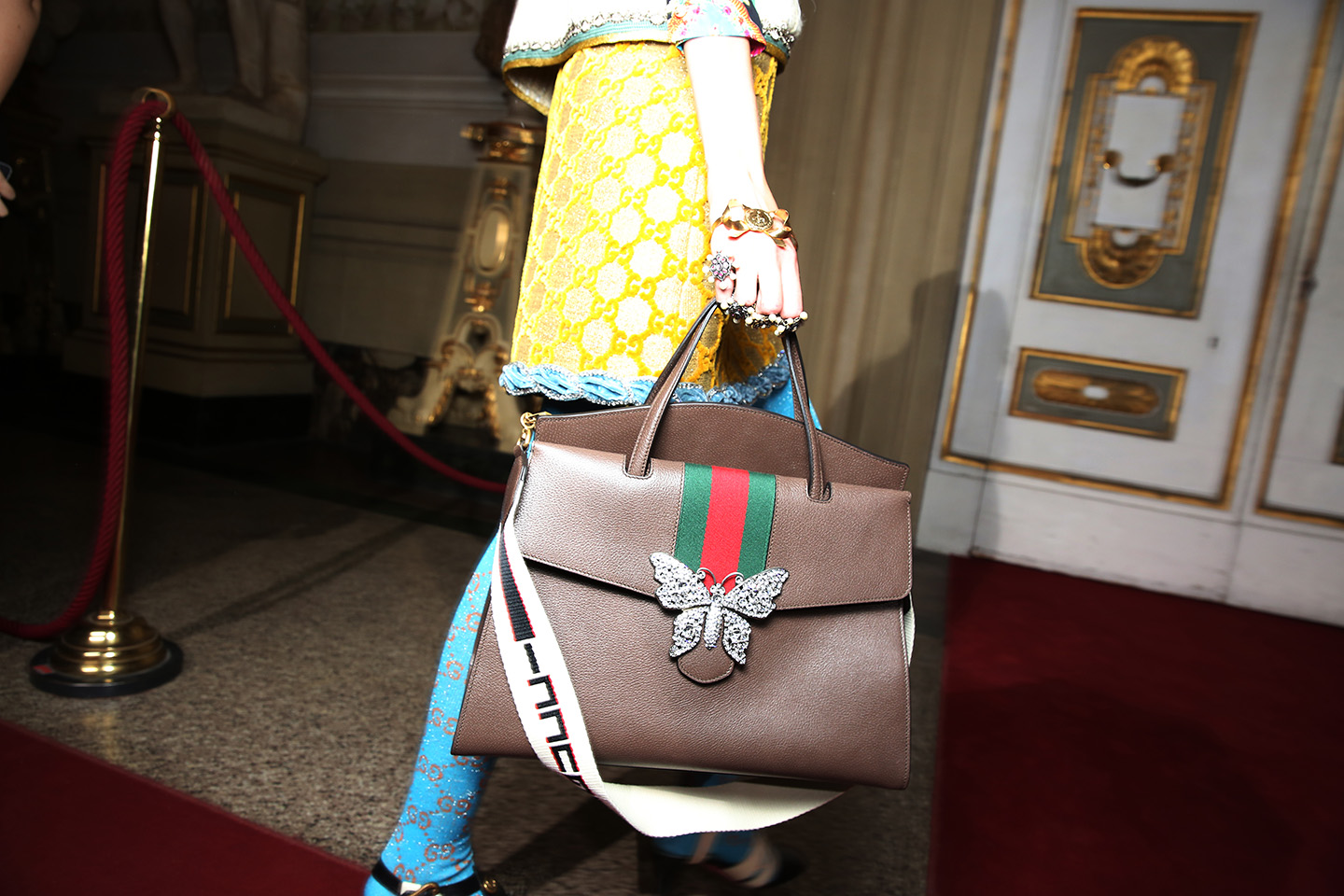 Michele is not one to shy away from the Gucci logo. On the contrary, he spun it on midi skirts, a men’s pantsuit, as well as on bomber jackets and furs. “The Gucci logo is the hieroglyph of the company, it’s the biggest decoration, it’s like a pop symbol, it makes everything powerful so I love it,” remarked Michele, who Anglicized it at times, turning the moniker into “Guccy,” paired with a teddy bear design. “Guccify” was splashed across the back of one jacket embellished with two azure Chinese guardian lions. 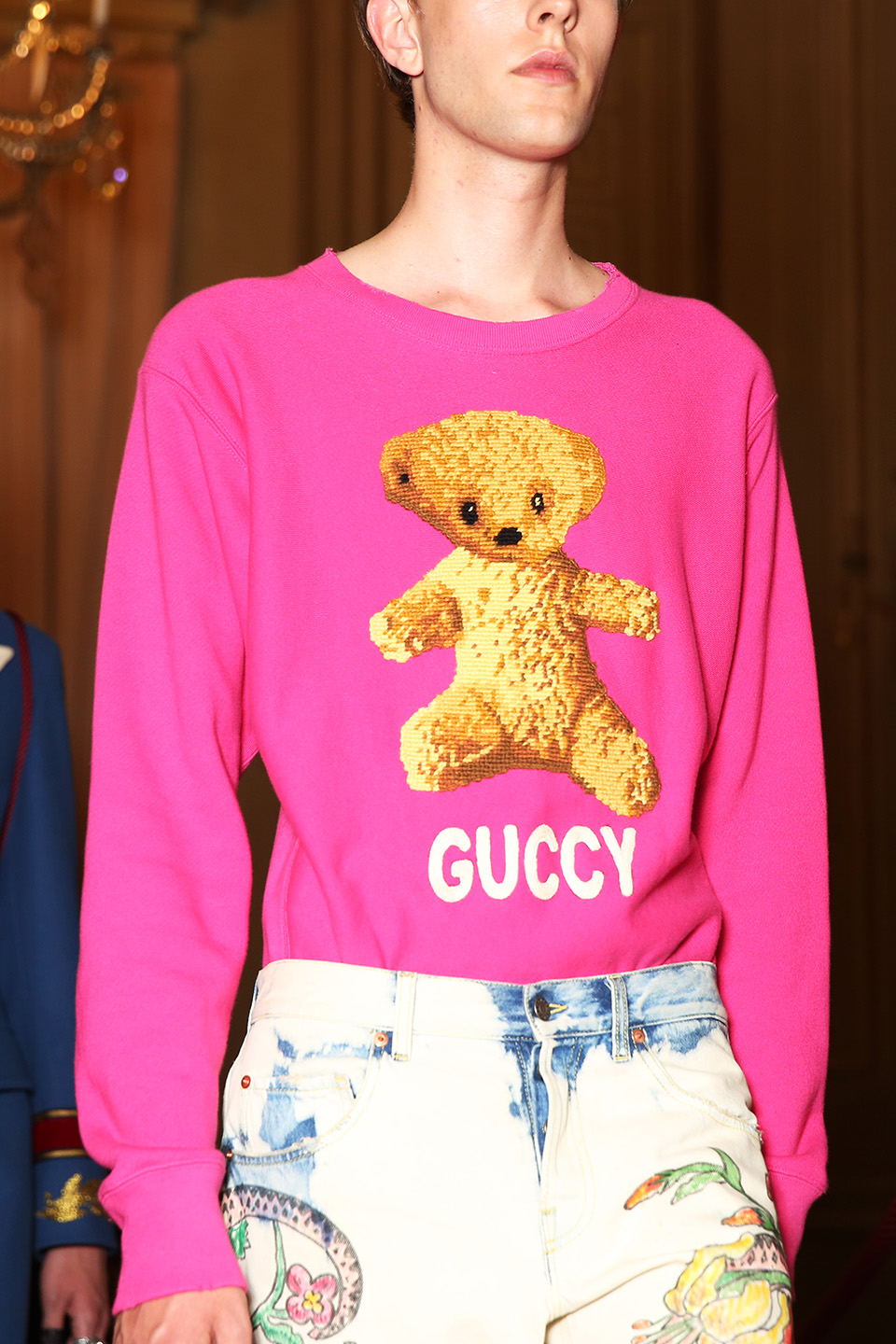 The designer also likes ambiguity. He explained of the box he designed for guests as a souvenir of Florence, with Urtica Ferox, or Tree Nettle, stamped on it and with a Gucci cap in a jute bag. “It’s a beautiful box, but you don’t know if it’s poison, a medicine or a perfume. It’s from New Zealand, and it was the most exotic thing to have in the Renaissance. It was so rare, but at that time, you could find it in Florence, [signifying] the richness of that time.”

There is no denying Michele’s ability to work with Gucci’s artisans, creating designs filled with details, embroideries, rich textures and ornamentation. And especially in this location, the collection reflected more than ever the designer’s creativity, which has turned the company around and made Gucci a hot name again. How he will further develop this creativity is the question now. 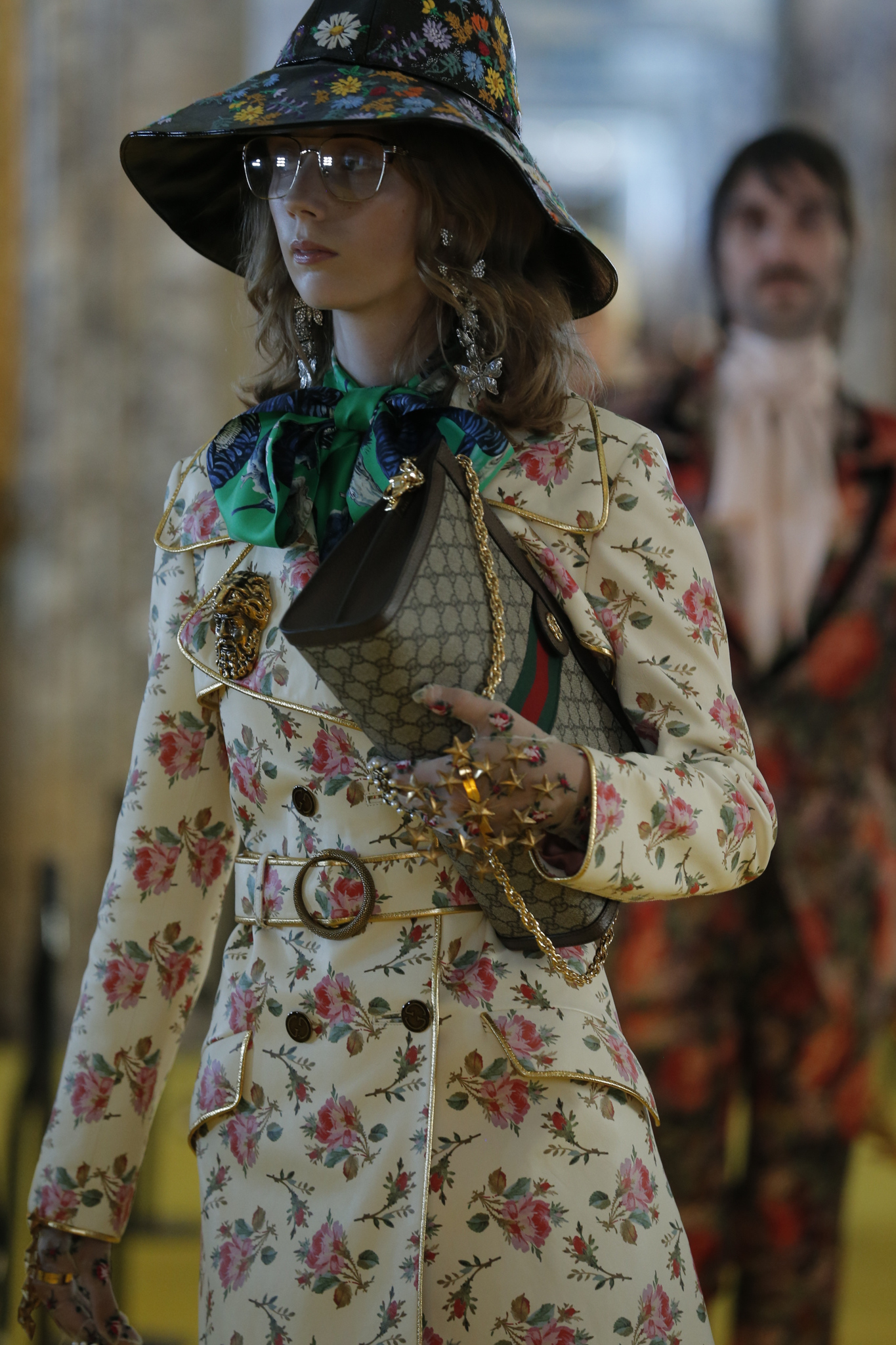 No matter — the guests who braved the sweltering Florence heat were all in the moment. Among them, several hailed from the music world, including Blood Orange, who was taking over Instagram stories for Gucci; Childish Gambino; Soko, and Baustelle.

Wearing an intricately decorated minidress, Saoirse Ronan said she felt her outfit “was a piece of art that should be hung.” Ronan described the tour of the Uffizi and of the Corridor as, “a special moment.” Up next, she will be playing Mary Queen of Scots. Her latest effort, “Lady Bird,” written and directed by Greta Gerwig, will be out in the fall.

Kirsten Dunst said she “couldn’t be happier about the great reaction” her latest film, “The Beguiled,” received at the Cannes Film Festival and about director Sofia Coppola’s win. Over the next month, Dunst will promote the movie in the U.S. Of the Uffizi, she said she had done a private tour four years ago. “So I didn’t have to worry about wearing heels today,” she added.

A regular Gucci attendee, Dakota Johnson just finished filming the remake of Dario Argento’s “Suspiria,” which she defined as “one of the greatest films ever and very influential.”

Jared Leto seemed unfazed by the soaring temperatures and appeared in a long lilac velvet coat, which he took off midshow. “Are you doing a Biblical film?” wondered Elton John about Leto’s long hair and beard. “Seriously, you look like you are playing Jesus.” The legendary singer later turned to Beth Ditto, exclaiming, “I love your record, Beth.”

As reported, Gucci will donate $2.1 million to support the restoration of Florence’s Boboli Gardens. The Palatina Gallery overlooks the gardens. This was the first time a fashion show has been held there. The event is part of a cultural project with the Uffizi Gallery and the city of Florence and the donation will be given over three years. For the use of the Palatina Gallery, Gucci spent another 200,000 euros, or $213,344 at current exchange.

Gucci is based in Florence, but Tom Ford was the last designer to present a Gucci collection in the city, in 1995.

In recent years, Gucci has established cultural collaborations with Palazzo Strozzi in Florence, the Minsheng Art Museum in Shanghai, Chatsworth House in England and LACMA in Los Angeles. Last year, the brand unveiled its cruise pre-collection with a runway show held in the Cloisters of London’s Westminster Abbey. The previous year, Michele showed his cruise 2016 collection in New York.

All the Looks from the Gucci Resort 2018 Show in Florence

Gucci Heads to the Gardens for Cruise Show

Gucci Reveals New Project Through a Mural in Milan