The Italian luxury fashion group is calling on its community to support two crowdfunding campaigns.

The Italian luxury house will make two separate donations to crowdfunding campaigns: 1 million euros will be donated to the Italian Civil Protection Department (Protezione Civile) in partnership with Intesa Sanpaolo, while the other 1 million euros will be channeled to the COVID-19 Solidarity Response Fund in support of the World Health Organization, through a matching campaign with Facebook.

Gucci is giving a shout out to its global community to raise funds and help health services with equipment and powering the scientists who are working on vaccines and treatments.

The initiative follows donations of 3 million euros from Gucci’s parent company Kering  between China and Italy as well as other donations in France — and the production of more than 1 million masks and gowns for health-care personnel.

“This pandemic calls us to an unexpected task, but it is a call to which we respond decisively, advocating the selfless work carried out by health workers, doctors and nurses on the front lines every day in the fight against the COVID-19 pandemic, in Italy and in the rest of the world. Their generosity and courage light our way forward in these difficult days. By supporting each other and helping those who are most vulnerable among us, we will be able to overcome this crisis: united, even more than before,” says a letter to all Gucci employees penned by creative director Alessandro Michele and Marco Bizzarri, president and chief executive officer.

“When we met for the first time in December 2014, we were two strangers who by some mysterious alchemy understood each other immediately. Two very different people who came from equally different worlds, but with the same idea: to imagine Gucci in a completely new way. We saw Gucci as a way of saying things that are important to us about what it means to be human. We saw Gucci as the multiplier of an idea of freedom, empathy and equality in affirming one’s individuality. The work of these past five years is the result of that idea,” the joint letter continued. 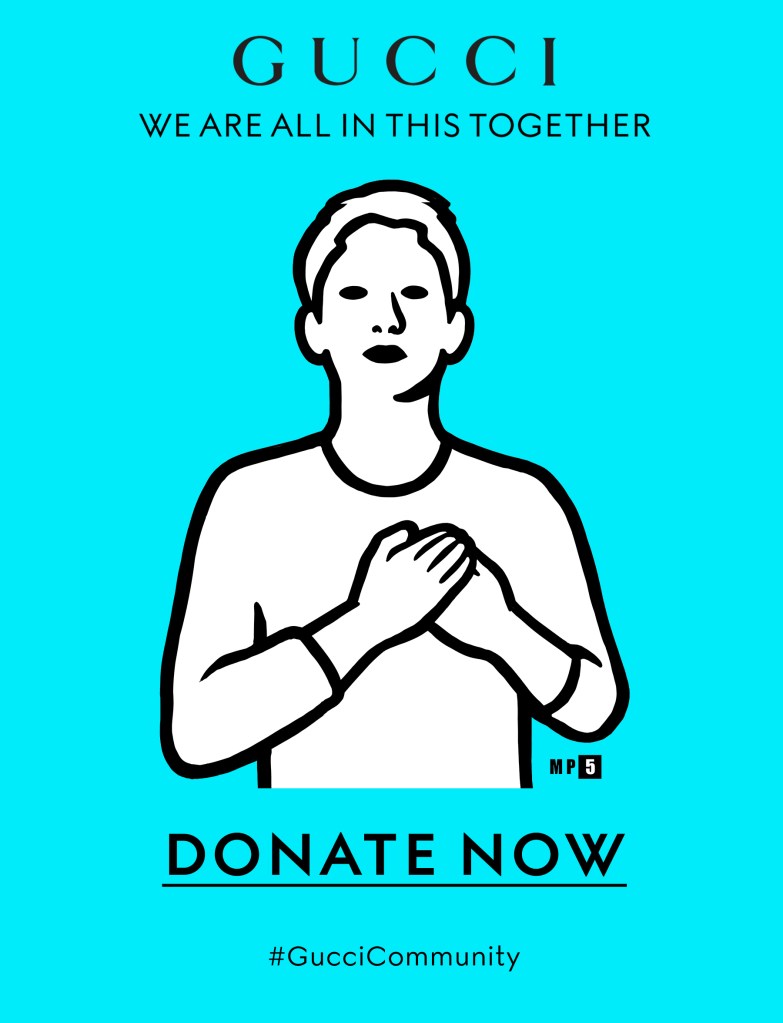 In Italy, which has been especially affected by the pandemic, the amount of 1 million euros to the Civil Protection will be donated through Intesa Sanpaolo’s ForFunding crowdfunding platform with a dedicated webpage gucci.forfunding.it, where the #GucciCommunity can also make donations. The priority will be to create new ICU beds.

Internationally, Gucci’s 1 million euros contribution to to the United Nations Foundation’s COVID-19 Solidarity Response Fund in support of the World Health Organization (WHO) will be made through a Facebook $10 million matching fundraiser. The COVID-19 Solidarity Response Fund’s aim is to support WHO’s lifesaving work across countries. This includes helping to track and understand the spread of the virus, to strengthen patient care and ICUs, to improve supplies for health personnel, including protective devices, and to accelerate the development of vaccines and therapies.

“Gucci has created a world, open and free: a Gucci global community. We ask all of you to be the Changemakers in this crisis, to stand together with us in the fight against the Coronavirus. We are all in this together,” concluded Michele and Bizzarri.

The #GucciCommunity is invited to make a donation to the Solidarity Response Fund for WHO through the “donate” feature available in the IG stories on http://www.instagram.com/Gucci. The total amount will be matched by Facebook as part of its matching initiative. Since it launched less than two weeks ago the Solidarity Response Fund has drawn donations from more than 200,000 people worldwide.

Gucci’s own site as well as its social media channels will also feature links to donate to both crowdfunding initiatives.

“We Are All In This Together” is the claim of the crowdfunding campaign together with an illustration gifted by Rome-based artist MP5, depicting a person holding their hand to their heart in a symbol of solidarity.

The crowdfunding campaigns are also launched internally to the company’s more than 19,000 employees globally.

Starting on Friday, Gucci will also put its social media accounts and its more than 70 million followers at the disposal of the World Health Organization, to help amplify health and safety information.