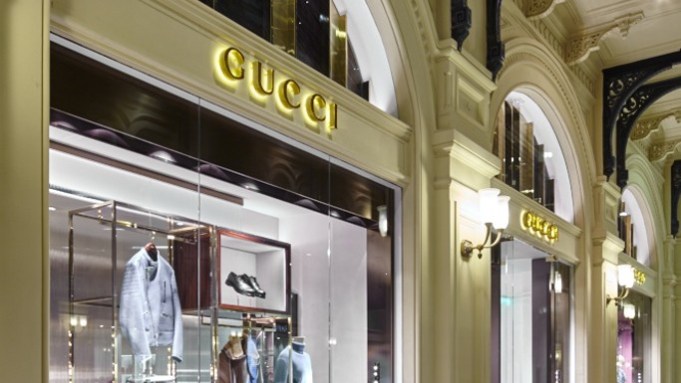 MILAN — A floundering economy, falling oil prices and a weak ruble against the stronger dollar and euro currencies — combined with a potential worsening of Western sanctions — are no roadblocks for Gucci, as it rolls out its new retail strategy in Russia.

The Italian firm, which last April took direct control of the retail network and operations for its three stores in the Moscow area, has opened two new units in the region this month — a 10,764-square-foot flagship store located on Moscow’s prestigious Petrovka Street, and a 7,534-square-foot boutique in the city’s GUM department store. Both units feature the latest Gucci store concept, which mixes the brand’s signature rosewood and marble with Art Deco-inspired elements, such as ribbed glass, polished gold, smoked mirrors and bronze glass.

In particular, the flagship on Petrovka Street, which spans over three floors and is one of Gucci’s biggest stores worldwide, offers special bespoke services in addition to carrying the label’s complete ready-to-wear, accessories, jewelry and beauty lines. A customization program for men’s shoes and women’s bags is available to customers, as well as Gucci’s Made to Measure sartorial service, which allows men to choose among a range of special fabrics and details. To celebrate the opening, the brand will introduce a women’s clothing collection exclusively available at the store starting from November. The lineup caters to the specific needs and taste of wealthy Russians, with a range of fur pieces, such as coats and jackets mixing astrakhan and mink, as well as an opulent embroidered astrakhan cape.

While Gucci declined to provide details on pricing for the special collection, price tags will surely not be for the faint of heart, especially considering that the ruble has lost 10 percent of its value against the euro since last January.

The weak currency is listed among the primary causes of the decrease in Russian tourists’ purchases in Italy during the first five months of 2014. According to tax-free data assembled by Global Blue for the Federation of Italian Fashion, the volume of purchases made by Russians in Italy dropped 13 percent in the aforementioned period.

The negative trend was confirmed on Tuesday by luxury goods association Fondazione Altagamma, which expects the sale of luxury goods in Russia to decline 18 percent in 2014.