Gucci: For the Boys

Why should girls have all the fun? 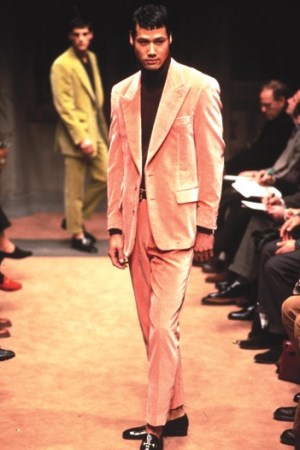 Gucci’s history of men’s wear can almost be traced by looking at photos of Hollywood stars.  From Clark Gable and John Wayne in the early years, when the house’s sole business was leather goods — specifically luggage — to the likes of Ben Affleck, Javier Bardem, Robert Pattinson and Mark Ronson today, Gucci has amassed its fair share of high-wattage male celebrity followers. And they have served as unofficial ambassadors, long before every red-caret bauble was chronicled and analyzed.

The house produced a swath of rugged technical products from its earliest days, including hunting and horse-riding gear, vests, gun cases and golf bags.

With such high-profile acceptance from the movie community, Gucci launched apparel for men in the mid-Sixties, about the same time as women’s wear started to appear.

All-time men’s bestsellers for the house include the horsebit moccasins, the Half Moon bag and duffel bags with the green-red-green web, as well as evening-wear and the classic overcoat.

1921: Gucci is founded, and builds its brand as a leather specialist, making products for the modern traveler — specifically trunks.

1940s: The company starts fine-tuning and adding to its selections, and launches men’s wallets.

1953: The creation of the horsebit moccasin.

Mid-1950s: Gucci introduces its green-red-green duffle bag, which goes on to become a best-selling accessory coveted by celebrities.

1959: The Half Moon bag is introduced and becomes an instant hit with the Hollywood set.

In the years leading up to the apparel launch, travel accessories for men become popular. These ranged from luggage designed to house shirts, shoes and ties, to toiletry cases containing brushes, razors and bottles.

1981: Gucci shows men’s wear on the runway for the first time, at the Palazzo Pitti venue in Florence, where it also shows its women’s ready-to-wear.

1994: Tom Ford is appointed creative director, a post he holds until April 2004.

2001: Gucci launches Made to Order formalwear.

April 2004: John Ray is appointed men’s wear designer, presenting his first men’s collection in June that year. He holds the post until January 2006.

March 2006: Frida Giannini is appointed creative director of the house, and adds men’s wear to her responsibilities. She presents her first Gucci men’s show in June that year.

2008: Gucci launches Gucci Viaggio, a modern travel collection of exclusive luggage and accessories. The company introduces the prestigious Goodyear design system for the men’s Made to Order footwear collection.